Miss Tagbilaran 07, the ugliest and the worst, so far

I missed to watch the Miss Tagbilaran last Friday held at the non-aircon HNU gym. I dont watch local beauty pageants except when Im not invited nor I have friends whore joining or organizing it.

The good thing is I wasnt able to witness such horrible show. Why horrible? True has been receiving text messages from friends and beauty enthusiasts sharing their stories about the pageant.

I had enough Miss Tagbilaran beauty pageants before. The last time I watched was last years. Its a common sense, even the simplest people her eon earth that it was a no good show although the event organizer claimed it as the best beauty pageant compared to the previous years. In fact, there were many elements overblown especially during the swimsuit competition that the girls looked like prostitutes according to the people. The choreographer must be reminded that it was Miss Tagbilaran and not a bikini contest.

How true that Rocky Jimenez, the choreographer and director of Miss Tagbilaran (this is his second time) have told Raul Gatal (and bragged) all pageants in the past were big flops. Ang iya ra kunong mga shows lami, Very Reliable Source (VRS) whos close to Rocky said.

Only a handful few were inside the gym to watch the show which started very late. Mostly were government employees whore forced to watch the show. The concept was amateurish and very plain according to a Bohol Wisdom PE teacher.

Nindot man ang previous beauty pageants. Karon lang siguro maot, a text message said. Maihap nimo nanan-aw. Basta way lami. Worst pageant I had watched, another texter commented. And these people dont lie. There were those who walked out and didnt finish the proclamation of the winners. The candidates, too, were not impressive, so as to say, the worst batch.

The production head could not say his show is the best one compared to previous pageants. Let the people of Tagbilaran judge your show.

A Tribute to Landring Tirol

Buenavista Vice Mayor Leandro Landring Tirol was laid to rest last April 28. The necrological service was attended by his friends, colleagues in public service and other people who were touched and moved by this man who served as public servant in his hometown.

I dont know much of Landring except about his a popular political figure sans negative things about him. But Landring had a special place in the hearts of his friends in Caingget, Tagbilaran City when he stayed at lawyer David and Mallys home when he was then a student at the University of Bohol.

Landrings friends in Caingget were my Papa Ceroy, Marcos Sarabia, Peter Arado, Sammy Maslog and Gregorio Galon. They were buddies through thick and thin. My Papa said that Landring accompanied them when they had to make a harana. Landrings favorite songs were of the Bee Gees.

That was in 1960s. Fast forward, Landring entered politics and had a special place in his hometown. His buddies in Caingget could not believe that their friend would become popular. There were occasions that they were invited personally invited by Landring for a drinking spree in Buenavista. Time had prevented Landrings friends to visit him in Buenavista... and until he passed away.

I was in Trinidad last Wednesday until Thursday to have a tête-à-tête with Judith BB Cajes whos running for mayor in Trinidad town. This is not my first time I was in Trinidad, Id been here years ago when I looked for a white carabao. BB Cajes runs to save Trinidad from its impoverished condition.

Trinidad is the hometown of BB Cajes hubby Cong. Roberto Ondoy Cajes. I saw how small is the towns municipal hall, the police station needs to be rehabilitated. I was about to surrender when I saw for the first time the towns only tertiary school, the Trinidad Municipal College (TMC)s poor condition. It looks like a haunted-abandoned house. This is not a tertiary school! Oh my gulay!

While in Trinidad, Id the chance to visit Talibon where I met Mayor Juanario Item. When I asked him hows the campaign trail, what he could say is hes fine. And I think, hes really fine because he has a happy disposition. Mayor Item knows what he says when he answered back against his enemies in politics. Among the issues thrown to him were he was the mastermind of arson of the public market, protectors of gamblers and druglords...and the worst, he asked the manginhasay to wear an ID. Of course, according to Mayor Item are all lies and he simply laughed. Enemies can create stories as long as they can, he said.

It can be noted that Mayor Items on-going projects are the rehabilitation of the pier, housing project in barangay san Carlos, irrigation dam, municipal agricultural assistance program, control of illegal fishing, gambling and droga, reclamation of the 17 hectares and renaming and giving birth of a new Garcia Memorial Medical Center. These projects are 75 % completion.

When I asked him what his secret of staying calm and young, he would just laughed. But he shared that it is peace of mind. He do tennis and jog every morning.

Watch your movie for free winners

Last week, the question was why first kiss was unforgettable. Our top 5 winners of will receive a movie pass courtesy of the Island City Mall Screenville Cinema.

My first kiss was unforgettable because I never thought it would be w wet a drooling experience. Ha ha ha. Dikko Reigh, Poblacion, Loon, Bohol

My first kiss was unforgettable because I did it with my cat. Mark Remolador, Belderol Street, Tagbilaran City

My first kiss was unforgettable because it was also my first frustration, my first depression, and my first heartache. Ma. Beverly Seiga, Tamblot Street, Tagbilaran City

In my desire to be romantic at the age of 13, I stole one from my girlfriend and it ended up with a slap in the face. My first regrettably became my last. Glenn Manigque, Bool District, Tagbilaran City

My first kiss was unforgettable because it was very sweet and until now I can feel it. Ivy Polison, Poblacion Sur, Carmen, Bohol

Five of the most creative answers will be chosen. Send your entries via email: leoudtohan@gmail.com or you can send it thru text at 09212446791.

Please include your complete name, address and contact number. Names of the winners will be published here on True. The contest is open to Bohol residents only. ICM Screenville Cinema is the most modern cinema outside Metro Manila. It has the first superior Dolby Digital Surround-Ex in Bohol. It has also a relaxing and comfortable fabric seats and state of the art film protection. So, start sending your entries now! 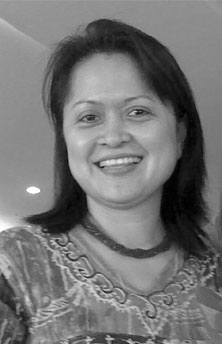 Last week, I was deeply moved when I received a ext message from Anne Mariquit Derikito-Oppus. Maam Kit has created an unparalleled connection with people in the province. As chief of staff of the Office of Vice- Governor Julius Caesar Herrera, she has entertained, enlightened and uplifted thousands of people. Her accomplishments as a wife, mother and public servant have established her as one of the most respected and admired public figures today. Now, she is ready to serve the people of Tagbilaran as she runs for city councilor.

How do you manage to look cool, calm and collected on the stress/tension-filled campaign trail? Cut-nap

How does she keep herself so fresh-looking and so fragrant in the sweltering summer sun? Does you have any, uh, secret formula? Vitamins, a lot of water and the privilege to meet different kinds of people; secret formula-loving what I do.

What do you value most? Family

What do you want to achieve? Personal: happy and successful family life especially the kids; professional: really make a difference in public service

Music I play in my room: mellow, jazz

Having problem of the heart is: Indeed problematic

What makes you happy? When people are happy

What makes you sad? When principles get in the way with friendship

Do you ever find time to relax? Always!

How much sleep do you normally get per night? 7-8 hours

Whats the last thing that you do before you go to sleep? Pray

And the first thing that you do when you wake up? Pray

Sexiest part of me according to Louie (her hubby, LPU) its my behind (my butt)

What about vegetables and fruit? Broccoli, papaya and durian

Oh, so youre carnivorous. Not really.

How much liquid do you take every day? Much: 6 to 8 glasses

Do you have time to work out? Yes

How do you condition your body? Stretching and breathing

What part of your body do you think needs some improvement? My arms and tummy

What part of your body is most vulnerable? Arms

How do you cope with stress? Pray and exercise

How often do you see your doctor? Regularly

And your dentist? Yearly

What about your dermatologist? Regularly

Do you apply anything on your skin? Dove soap, cetaphil for my face, and Oil of Olay

Whats your outlook in life? Positive!

Name a guy in Bohol (not your husband) you think has a nice body. Cant think of anybody, really.

And some women... Mrs. Delia de la Serna and that of my eldest child, Louise

How do you deal with intrigues? Giving them the benefit of doubt and just count my blessings.

This article has been viewed 109 times.