Never mind if True had added a new year as he turned a little older last May 25. His first ever different column in the province will bring society, entertainment, showbiz and all sundry writing to a different level--away from the more common and sensationalized gossip writing- therefore, adding a very distinct touch of class and competence to his trade.

I got a text message from Bong at 3:45 a.m. last March 23, informing me that Sister Dominga Doming Reponzo passed away at 2:50 am due to cardiac arrest.

Sister Doming was the caretaker of the Lamplighter founded by Father Eleuterio Tropa, modern philosopher-scientist of Dumandan, Oriental Negros. Id visited the place (particularly the Paradise World and Oceanarium) twice; the first time was in 2001 with my History classmates and the second time last year when I covered the place for GMA 7s 24 Oras and Kapuso Mo, Jessica Soho.

Father Tropas group has a unique and liberated philosophy of life. All members are all bare-footed because they have the belief that they are part of nature. All members have long hair because they believe long hair is an antenna for catching good reception. I could remember Jun Vergara and Sis Doming and the members who welcomed me at the Zoo Paradise. I thanked them for trusting me to film their stories.

One philosophy I did learn from them is: Go on living. Loving and serving your fellowmen selflessly, without expecting any reward, and without malice or bad intent, then you have found the true eternal fountain of youth.

Im sure Sis Doming had fulfilled her mission.

Jose Jono Jumamoy, 21, is everyones favorite not only with his circle of friends but with the people of Inabanga who voted for him last May 14 elections making him the youngest mayor in history in the province of Bohol and in the Philippines.

With his curls, sensuous mouth, and killer smile, he became one of the most talked-about young leaders of his generation, attracting at first numerous admirers of his good looks, and later fans of risk-taking performers and public service.

Is Jono Jumamoy ready to serve?

That was a rhetorical question. The answer is, of course, a resounding yes, Jose Jono Jumamoy is ready to serve!

After his successful story in the US as a young graduate with the degree of International Business and Management at the Westwood University in Florida and a good career at the World Bank, Jono had to make the hard decision whether he had to run or not.

Last Thursday, True sat down with Jono at Bos Coffee Shop. My interview was for this column and for bout u (de Ers became my cameraman for that report) for GMA 7 (24 Oras, Saksi and Unang Balita) and GMA Pinoy TV. (Watch it yourself on GMANewsTV).

First question I asked him was: What do you value most?

I refrained from asking Jono one question  How does he feel being called the The Youngest Mayor in the Philippines?  which I was told, makes him uncomfortable but which I did ask him during our first interview. His answer then? I feel very honored. And my follow-up question  What part of his body does he think is the sexiest?  drew nothing more than a shrug. My mind, he quipped.

Find out as you read this column how Jono reacted if what he wears briefs or boxers, the most daring question I ever asked for Jono (and other popular men in the country).

Heres Jono straight from the heart:

What do you want to achieve? I want to continue the legacy of my family to serve the people. (The Jumamoy in Inabanga have been known as politicians. Jojos dad Boy Jumamoy was a former mayor and provincial board member; Jonos mom, Roygie, became a provincial board member and a three-termer mayor with award-winning projects and Jonos sis, Janna, is a town councilor. Politics is not new to Jono, right. And service is not a monopoly.--LPU)

Person I want to meet: Lee Kuan Yew. I want to know how he made Singapore what it is now. (Lee Kuan Yew is also known informally as "Harry" to his close friends and family and thus his name is sometimes cited as Harry Lee Kuan Yew, although this first name is never used in official settings.-LPU)

Single? Or in a relationship? Single. I dont have a girlfriend. Im too busy.

You are single and loveless, being an accomplished bachelor, how would you describe your ideal girl? Smart. She doesnt take herself seriously. She should make me laugh.

Having problem of the heart is: painful.

What makes you happy? Knowing I have done something to make other people happy and satisfied.

What makes you sad? When you feel empty (laughs, De Ers was speechless while listening to Jono)

Briefs or boxers? Boxers. (He admitted hes wearing boxers during the interview.--LPU)

How much sleep do you normally get per night? I have an insomnia. (Insomnia is a sleep disorder characterized by an inability to sleep and/or inability to remain asleep for a reasonable period. Insomniacs typically complain of being unable to close their eyes or "rest their mind" for more than a few minutes at a time.--LPU)

Whats the last thing that you do before you go to sleep? I watch TV and read books (Hes reading the Art of War. The Art of War is a Chinese military treatise written during the 6th century BC by Sun Tzu. The Art of War is one of the oldest books on military strategy in the world. It is also one of the most famous studies of strategy and has had a huge influence on Eastern and Western military planning, business tactics, and beyond.--LPU)

And the first thing that you do when you wake up? I drink coffee. (He consumes 2 cups of coffee to begin his day.--LPU)

Sexiest part of me: My mind. Its something that others dont see. It takes time to explore and appreciate....

Do you follow a diet? Not really. I eat what I want.

Whats your favorite food? Filipino (adobo) and Japanese (sushi) cuisines. I missed Filipino foods when I was in the US.

Are you carnivorous? I love steak ... a lot.

How much liquid do you take every day? I dont know. I just drink water and fruit juices if I want to.

Do you have time to work out? Nope. Im too busy but Im planning. (In the US Jono disciplined himself for 3 months in the gym and he gained two packs. His sister Janna is pushing him to workout.--LPU)

What part of your body is most vulnerable? My feet. It easily hurts.

What vitamins do you take? I take Centrum and Vitamin C.

How do you cope with stress? I sleep and watch DVD.

Favorite hideaway? In Bohol, for now is Panglao. Outside Bohol is Cebu and outside the country is Bali, Indonesia.

How often do you see your doctor? Seldom.

And your dentist? Once a month.

What about your dermatologist? None.

Name three women you think have nice bodies. Anne Curtis (local actress), Maria Yuryevna Sharapova, tennis princess who was born on April 19, 1987) is a Russian professional tennis player. At the end of 2006, she was the world's highest-paid female athlete. Sharapova has won two Grand Slam singles titles. Jono met her in New York.-LPU) and Adriana Lima, the sexy Brazilian model. 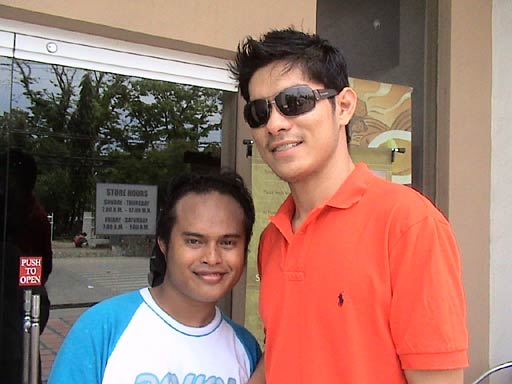 Read all 15 comments by readers.

This article has been viewed 919 times.