The Philippine tarsier, (Tarsius syrichta or Carlito syrichta) is very peculiar small animal. In fact it is one of the smallest known primates, no larger than a adult men's hand. Mostly active at night, it lives on a diet of insects. Folk traditions sometimes has it that tarsiers eat charcoal, but actually they retrieve the insects from (sometimes burned) wood. It can be found in the islands of Samar, Leyte, Bohol, and Mindanao in the Philippines. 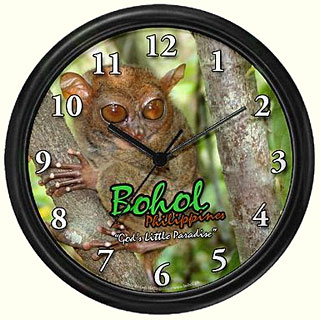 Let's keep an eye on the time with this exclusive tarsier clock,
USD 15.99.

If no action is taken, the tarsier might not survive. Although it is a protected species, and the practice of catching them and then selling them as stuffed tarsiers to tourists has stopped, the species is still threatened by the destruction of his natural forest habitat. Many years of both legal and illegal logging and slash-and-burn agriculture have greatly reduced these forests, and reduced the tarsier population to a dangerously small size. If no action is taken now, the Philippine tarsier can soon be added to the list of extinct species.

Not "The World Smallest Monkey"

"The world's smallest monkey" is an often heard slogan. However, it is not a monkey. In truth, its classification is somewhat problematic. Some scientists consider tarsiers to be a taxonomic suborder among the primates. While, because they are closely related to lemurs, lorises and bushbabies, others classify them with the prosimians to which these animals belong. Monkeys and apes belong to the suborder of anthropoids. The complete taxonomic classification thus is:

In the Philippines, three very similar species have been described. It is very well possible that these species are actually a single species, developed into three races due to the physical separation on the various islands.

The tarsier was first introduced to Western biologists through the description given to J. Petiver by the missionary J.G. Camel of an animal said to have come from the Philippines (Hill, 1955). Petiver published Camel's description in 1705 and named the animal Cercopithecus luzonis minimus which was the basis for Linnaeus' (1758) Simia syrichta and eventually Tarsius syrichta. Among the locals, the tarsier is known as "mamag", "mago", "magau", "maomag", "malmag" and "magatilok-iok".

The species is believed to be about 45 million years old, dating back to the early Eocene period, and probably one of the oldest land species continuously existing in the Philippines.

Currently, the Philippine tarsier is categorized as a "lower risk, conservation dependent" species, which means that, although it is not yet categorized as vulnerable, endangered, or critically endangered, it could qualify for one of those categories within five years if the present protection programs are stopped.

General. The Philippine tarsier has a gray fur and a nearly naked tail. The middle finger is elongated. Head and body length are around 118-149 mm; It weighs 113-142 grams. Males are larger than females.

Eyes. In comparison with his body size, the eyes of the tarsier are enormous. In volume, the capacity of the bony eye orbits, or eye sockets, is larger than that of the brain case, and also larger than its stomach. Their eye sockets have post-orbital closure rather than the postorbital bar of the prosimians. This feature keeps the eyeballs from being pressed against by the powerful temporal muscles to their sides.

Tail. The tarsier has a relatively very long tail (232 mm), generally naked except for a tuft of hair at its end. The underside has dermal ridges like those found on human hands and feet. Its tail is used for balancing like a tripod; they prefer an erect posture at all times.

Head. Like an owl, the tarsier has a joint between its skull base and spine to allow head movement of a 180-degree arc. Its upper lip lacks a cleft yet, but still has muscles, so that it can make facial expressions. The adult brain weighs about 4 grams.

Teeth. Tarsiers have sharp teeth, enabling them to catch their prey easier. Unique among primates, tarsiers have only two, rather than four, incisors in their lower jaw. Their dental formula is 2.1.3.3 1.1.3.3 x 2 = 34.

Ankle bones. The name "tarsier" or "tarsius" is derived from the animal's very long ankle bones. The tibia and fibula of the tarsiers are fused in their lower portions, acting as a shock absorber. This is considered a primitive trait, which can normally be seen in quadrupeds. The lower limbs are twice the length of its trunk. These enable the tarsier to leap about three meters from tree to tree. Its movements are similar to that of a frog.

Comparison with other Primates. Tarsiers share some characteristics with both the prosimians and the anthropoids, while they also have some characteristics peculiar to themselves. Taxonomists have classified them as intermediate between both groups and have assigned them to their own infraorder, which contains just one living genus: Tarsius. Fossil records of this genus are found, dating back to the Eocene epoch, from 54 to 36 million years ago.

Like many prosimians, they are nocturnal and have grooming claws and bicornuate uterus.

Like anthropoids, they do not have a tapetum (a reflective layer in their eyes).

In tarsiers, the internal structures of the nose and ears and the blood supply to the brain and to a developing fetus are more like those of monkeys than of lorises. The monthly sexual swellings of female tarsiers are also similar to those in anthropoids.

Habitat. Tarsiers are arboreal. They live in and around the base of tree trunks and the roots of plants such as bamboo. They can occasionally be found in holes are at the top of trees. In Mindanao, tarsiers appear to thrive best in second or third growth thickets along the coast and in the valleys.

Behavior. The Philippine tarsier is nocturnal; they hunt at night, exclusively for animal prey. At day time, they hide in hollows close to the ground. When kept in captivity, individuals may huddle together or intertwine their tails. They are believed to live in groups, larger than just one male and one female. The female appears to take care for the young exclusively: no male parental care has been observed.

Diet. Tarsiers live exclusively on animal prey. Their diet includes primarily insects such as cockroaches and crickets, but may occasionally be extended with reptiles, birds, and bats. A Philippine tarsier in captivity will eat live shrimp and fish in a bowl of water.

Sounds. The tarsier produces a a number of different calls. The loud call is a loud piercing single note. When opponents meet, they produce a soft sweet bird-like trill. When several individuals communicate, they can produce a locust-like chirping. Females have a specials sound to indicate that they are fertile.

Scent Marks. Male tarsiers have epigastric glands, which they use for scent marking.

Reproduction. Females tarsiers have a prosimian-type uterus but a higher primate type placenta. One unusual feature is that they have multiple breast pairs, yet generally only the pectoral pair is functional. The other ones serve as anchoring points for newborn. The gestation period of a tarsier is about 180 days (6 months), and only one young is born at a time. When a tarsier is born, it is already in a well-advanced state of development. It is born well furred and with its eyes open. The head and body length at birth is 66-72 mm, the tail is 114-117 mm long, and its weight is 25-27 grams. They are able to move about after only two days. The mother carries infants with her mouth or on her belly. No nest is built. The female parks her infant while foraging. A young tarsier can climb after two days and jump after four. After about 19 days, young tarsiers already move around much like adults. It is breast-fed upto about 60 days. Juveniles tend to be more uniformly colored than adults. After two years, young tarsiers become sexually mature. The female has an estrus cycle, or recurring period of heat, of 23.5 days. Mating can take place any time of the year. Tarsiers can become 12 to 20 years old.

Where to Meet the Tarsier

You can visit the tarsier at the Philippine Tarsier Foundation, and see it in its natural habitat.

Please avoid visiting the tarsiers kept in cages along Loboc river. Here, these shy animals have a miserable live, and normally don't survive for long.

First of all, the report of our visit to the Tarsier on this website.

Some notes on primates and the place of the Tarsier within the hierarchy of primates can be found on The Primates by Dennis O'Neil of Palomar College.

Another website featuring pictures of a tarsier is http://www.tarsieruk.homestead.com/Home.html.

Condensed from material by The Philippine Tarsier Foundation

Read all 243 comments by readers.

This article has been viewed 5052 times.