True: Why youll love and hate your school

Flash report! There love-me-and-hate-me of a businessman and his wife here in Tagbilaran City might be the controversy story of this year as the wife will file annulment this month. Another Ruffa Gutierrez-Yilmas Bektas controversy in Bohol? Yes. It would be a climactic end to an ill-fated romance that will hog local community (within the business circles), even finding its way into eskenita all over the city.

Let us call this businessman A, a good friend who asked for anonymity, not to mention his name, for his familys sake and his wife B. A met B when she was still a college student and A was bachelor who managed the familys business.

A heard rumors that his wife had dated another man even they were in good terms until these rumors were proven by A himself. It wasnt easy especially that their daughter is growing up and their families would not consider separation as a solution of a worsening marriage.

According to VRS, B says that shes filing annulment because I dont want A anymore.

The only problem is the wife has no money for filing. According to a lawyer, if youll file for annulment youll dish out almost P100,000 and she has no money, according to A.

I cannot force B to love me, A said when I asked him if there is a chance to settle down. If she wants annulment, she has to pay it, he continued.

Months ago, A and B announced their trial separation but refused to reveal the cause of the break up. They stressed that there was no third party involved, refuting the rumors linking B to other several men shes dating.

A said to True he will not fight for custody. He also mentioned that he has no problem if the kid will stay with her mom or grandparents as long as the kid is safe and sound.

Probed on his future plans now that hes a separated man, A said that hell surely move on and perhaps would be with someone new only after a few weeks. 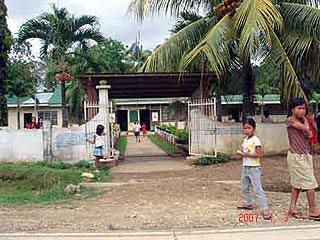 Its school time. Millions of students all over the country went back to school again. While roaming around the province, I saw the various problems especially in public elementary and high schools such as lack of classrooms, lack of teachers and overcrowding. While observing the kids with their new shoes, new belt and new uniform, I could not help but reminisce the times when I was a schoolkid in the nineteen forgotten.

Imagine, you enter an old building with a wrought-iron gateway. Then into a massive buttresses constructed form coral limestones. More? The capiz shells for window panes that characterized the genteel Hispanic lfie. Lost? You may happen to be enrolled in: 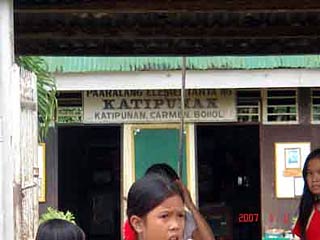 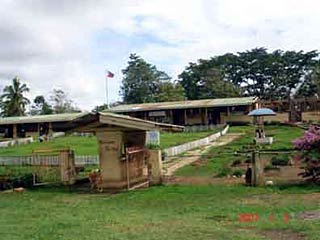 You can have Salus Institute in Tubigon.

Cortes has Infant King Academy; the first in the country -- Biking National High School in Dauis

Heres a shocking news item from the United States about a Fil-Am with roots from Bohol who was charged with burglaries. This news is printed in the Filipino Reporter and other US newspapers and on TV. Police are investigating whether a senior class president of Rutgers University's Livingston College - who is also its reigning pageant queen - teamed up with her boyfriend for a string of dormitory burglaries.

Christa O., who last year had been crowned "Ms. R.U." at the Piscataway school's annual pageant, has been barred from graduation and could be denied a degree.

The popular Filipino-American president of Rutgers Universitys (RU) Livingston College Class of 2007, who shocked the entire Rutgers community when she was arrested and charged last week with teaming up with her boyfriend for a string of dormitory burglaries dating back in September, was hard up for cash, according to her brother.

She made a mistake... she wasnt thinking, the brother, Chris, 17, told reporters. It was money.

Police said Christa, 23, of Rahway, N.J., and the reigning Miss RU, stood as a lookout while her boyfriend, George C., 23, of Jamaica, N.Y., gained access to dorm rooms in Lynton Towers with a master key she provided. Christa and George, who were slated to participate in commencement exercises on May 17 at the main Piscataway campus of RU, will not be graduating, Rutgers University Police Chief Rhonda Harris said.

The two could also be denied their diplomas pending a university disciplinary hearing, officials said.

Christas status as class president has been withdrawn, Harris added.

They are subject to criminal charges and university judicial proceedings, and will be suspended or expelled, Harris said.

Christa, a biology major with a double minor in psychology and art history, wants to be a medical doctor, according to friends.

They said her parents, who come from a prominent family in Candijay in Bohol, Philippines, are devastated.

Christa served as a resident assistant in the dormitory for the last two years and had a master key to all the rooms.

The crime unraveled after a student returned from the shower and caught George inside his locked room, holding a duffel bag full of the students possessions, Harris said.

Inside the bag were a laptop, digital camera, wallet with credit cards, iPod case and cell phone case.

The student confronted George who fled the scene.

While trying to escape, George changed his shirt and attempted to change his appearance on another floor, Harris said.

Harris said Christa served as a lookout, trying to distract one person from going toward the room and two others from pursuing George.

Shortly after George was spotted, student Richard Thompson, along with other students, barricaded the front doors of the residence hall so that George couldnt escape before campus authorities arrived.

The suspects were arrested around 7:30 p.m., police said.

He was not getting out, we were so fed up, Thompson said last Friday. They put a lot of students through a lot of stress during finals. Christa and George were charged with burglary, theft and criminal attempt.

George also had an outstanding warrant for $235 from North Brunswick.

The two were taken to the Middlesex County Adult Correction Center in North Brunswick. Both have been released after posting $2,500 bail, Harris said.

Shes (Christa) the boss of the class and shes very popular, one student told a TV reporter. Shes my friend and I can say its out of her character. Its really shocking she would do it. She has a great future but she ruined it with that stupid mistake.

Rutgers police are now investigating whether Christa and her boyfriend were responsible for additional dorm-room burglaries reported in the South Tower residence hall in Piscataway in recent weeks, officials said.

Christas younger brother, Chris, denied his sister was behind the rash of campus heists over the past several months.

Thats the only one she did, said Chris, referring to the May 7 dorm-room break-in. Shes not involved in the other ones.

Joan Carbone, executive director of residence life which oversees all student housing in the New Brunswick and Piscataway campuses, said that in her 25 years at the university, this was the first time a resident assistant, or RA, was charged with breaking into a dorm room.

RAs dont do these kind of things, Carbone said. This has never happened.

Students said at least six South Tower dorm rooms were broken into during the last two-and-a-half weeks and fear was spreading among residents.

Students said they used additional locks while in their rooms and took valuables like laptops and iPods with them when they left the room unoccupied.

Others resorted to leaving televisions or stereos on to make it appear someone was home.

Students had suspected all along it was an inside job. Now they are asking for full compensation for stolen items since the alleged thief was an employee.

Christa, her friend said, was very active in school and always appeared busy with class-president duties.

As president of Class of 2007, she was responsible for organizing senior week events, including fund-raising.

This article has been viewed 400 times.