True: Korean invasion and other tales 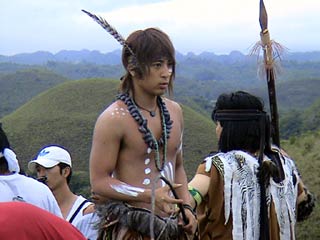 I'll go straight to the point:

Yes, Bohol is a favorite destination of our Korean friends.

Philippine Ambassador to Korea Madame Susan Castrence could attest to the popularity of Bohol in Korea. "Koreans are asking me about Bohol," Madame Castrence told the Philippine delegation when we visited her office in Seoul, Korea last February. She confessed that while she knows about Bohol and its natural wonders, she has never been to Bohol.

"I've never been to Bohol and I wish to visit your place someday," she said.

Selling Bohol to the world is a rising star in Korea, Coolapica. He's a Korean singer specialized on reggae style who is here in Bohol for his MTV. He arrived last Thursday together with another Korean actor Mopalmo, who is known as Yuri in Koreanovela Jumong (Monday-Friday, 10 p.m. or after Lupin on GMA 7). 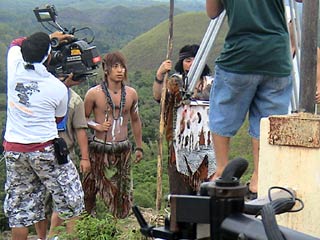 Their last destination yesterday was Bohol's landmark, the Chocolate Hills. Today, the group might leave for Manila.

Mopalmo was the first person I'd interviewed knowing that Jumong is enjoying high ratings in the Philippine TV. He speaks little English. I told him in broken Korean that I'm watching Jumong and I asked him how it feels Filipinos are watching it. There was no interpreter around and I didn't get him clear. However, I just heard the word kumhapsaneeda and saranghe which means "thank you" and "I love you." Probably, Mopalma said, "thank you for watching and I love you."

It's Coolapica turned. Asked in an exclusive interview with True about his impression on Bohol, if there's any Coolapica said yes.

"Your place is very wonderful. The chocolate hills are amazing," he said during his break.

While in Korea, I noticed that popular male singers are Rain and the Korean reggae artist Skull. As earlier as now, I am warning Skull should be watchful. Coolapica, the rising reggae hiphop master will release his single "Hey Yah!" months from now.

I could not help but comparing Coolapica to Rain. Rain, so far, is an icon in Korean pop culture. I saw him performing in Korea and girls went gaga over. 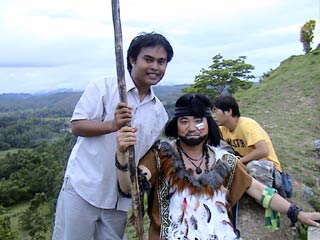 "Rain," Coolapica humbly said though he has the body and talent too. "Rain can dance and me I'm into reggae hiphop," he continued.

The music video covers the beautiful beaches on Alona and some places in Panglao. The staff were utilizing local talents for the MTV., the Tawala Boys and Mitchel Sumari from Balicasag Island. It is expected for smash positive comments from music fanatics. While seeing Coolapica and hearing him singing, it has 'cool beats'

If Skull is ``the future of reggae," Coolapica is "the prince of reggae." He's really "cool."

The cancellation of the Miss Bohol Sandugo 2007 received reactions from readers.

First of all, this kind of event builds personality, talent and confidence to our young generation. It trains young people to be competitive in real life; i.e. you have to do a lot of preparation, develop your talent... even some wished that they would grow taller, some already prepared their speech even a year back, some made research to improve their IQ.... etc.

I am saddened to the fact that these young candidates took years preparing themselves for this event and all of a sudden it was cancelled for some narrow reason. This is not just a money making event but a search for someone to represent the Boholano People.

In my opinion, cancelling this event is an irresponsible decision and degrading/neglect to Boholana women...

Paredes's reason that there's little time for preparation is unacceptable and very narrow. The committee is only talking about themselves. How about the years of personal preparation for these young candidates? .... If government has no funds, then ask from the private sector....organize sponsors....

Sad to say, the candidates of "beauty pageants" lately have been less than beautiful and/or smart. Much of these events have evolved into mediocrity and sheer bore-fests. The signs are apparent in the thickening of make-ups, more constricted poster photos, and most importantly, the number of "boooos" contestants get for the wrong grammar, pronunciations and logic of their answers. Gone are the days when pageants were still about beauty and glamour. (And well, money).

It's not that we've run out of "beautiful and smart (and rich)" candidates. It is more on the fact that nobody is willing to take up the challenge anymore. "Baduy" and "untasteful" are the most common remarks. I can hear the some girls saying it's "cheap" to join pageants and would rather do gigs up the catwalk as models. While a growing number are saying it's the worst form of sexual exploitation - legally parading young innocent girls who will be preys to businessmen or politician-flesh-predators after they win.

Could it be true that Angel Locsin declined to play the role of GMA 7's new soap opera, the "Filipinized" MariMar (popularized by Mexican star Thalia in 1994 who is now pregnant after 7 years of marriage to Sony mogul Tommy Mottola as reported by True for Ricky Lo's Funfare at Philippine Star days ago)?

Angel thinks she can't sing and dance well which the role requires. Nevertheless, it looks like GMA has already found the actress for the role and she's Marian Rivera. She's got a great body, sings and dances well. Marian also has Hispanic blood because her father is Spanish and she was born in Madrid, Spain. If all goes well, Marian will join the other cast: Dingdong Dantes as Sergio Santibañez, Richard Gomez as Renato Santibañez, and Bing Loyzaga as Angelica Santibañez. Marimar will be directed by Joyce Bernal and will premiere in July.

Marian even went to Church to ask God that she would win the much-coveted role and she got her wish. Since this actress is too young to know MariMar in the late 1990's, she said that she even researched the info regarding the MariMar telenovela and the actress who played MariMar since she heard that the character dances and sings. "Ay! I don't remember about that. I only remembered Thalia dancing in the opening credits. I think they mixed MariMar with Rosalinda," Anna Lazo, a Thalia-watcher commented.

Marimar is the story of a young, poor girl who grew up along the coast with her grandparents. One day she meets a rich and handsome boy Sergio Santibañez, a son of a wealthy haciendero. In an act of revenge against his family Sergio seduces Marimar into falling in love with him. But Sergio abandons Marimar when he goes to Mexico to work as a football player. Then, Sergio's step mother Angelica makes plans to get rid of the pregnant Marimar.She accuses her for stealing, puts her to prison and burn her house while her grandparents are in. When Marimar comes out of prison she goes to Mexico where she finds her rich father who had left Marimar's mother. Now Marimar is determined to take revenge at those who heart her including Sergio.

Can the "Filipinized" Marimar enjoy the same unprecedented rating?

This article has been viewed 92 times.