No shortage of honest men

Honesty begot honesty--and more blessings keeps on pouring for Iluminado "Nong Lumi" when he decided to return a cool $17,000 (The money's peso equivalent is P800,000) which was placed in an envelop and left in his tricycle by an unsuspecting passenger. 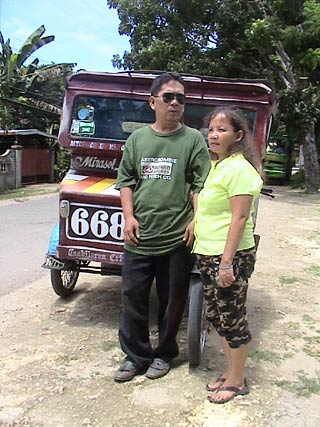 Nong Lumi and his wife Laureana.

He was struggling financially because his wife was taken to a hospital the same day he found the money, and they had unpaid rent at Habitat village is 3-month overdue. The money might be a win-win solution. More, he could buy other things for his family. But for the tricycle driver who earns P300 a day and still paying for the renting of the tricycle, it was not as easy as that.

"Dapat akong iuli kay dili man to akoa... naa man toy tag-iya nga ilang ibalay," Bok said. (The money is not mine, there is a rightful owner who will build a house)

Instead of keeping the money to himself, he lost no time in tracking down the owner and returned it pronto!

The money was left in his tricycle while a passenger boarded it from the city airport. He then dropped at the BQ Mall.

Two hours after he left the passenger at BQ, the honest driver noticed the envelope. He inspected what was inside it and saw a number of US dollar bills.

When he found out its worth, he headed for the Tagbilaran Police Station and turned it over to the policeman on duty.

At the police station, there was a woman who was able to identify its owner to be a seaman.

The police personnel asked Bok to stay, since they have already contacted the owner of the envelope who promised to give an incentive. The owner rewarded him with $32 - about seven times what a motorcycle taxi driver makes a day.

Being in dire need of money to pay the hospital bills, Bok received it without any hesitation.

Bok had been driving a tricycle since 1979 and it was not the first time a passenger left a valuable item which he always found ways to return them to their owner.

Tagbilaran City Mayor Dan Neri Lim lauded Bok's heroic deeds. The Mayor, as an act of gratitude has paid for the house rent. He will give one unit of tricycle to Bok. Moreover, Bok can avail the city's blue card program for health care benefits. 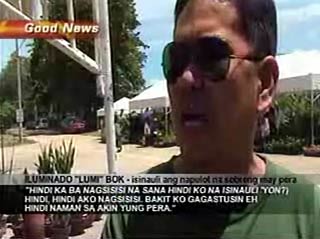 "When I learned about his heroic deeds, I know there is still hope for us. There are still honest people," Mayor Lim said.

The Brother of Christian Businessmen and Professionals (BCBP) in Bohol gave Bok an award acknowledging his honesty. He is a good example especially that the BCBP has an "Honesty is the Best Policy" campaign around Bohol.

Read all 26 comments by readers.

This article has been viewed 153 times.