CSG vs The Word

CSG vs The Word

Read the Most Unforgettable Love Story

Predict the next US President and win

www.tubagbohol.com, one of the country's most active forum sites, has officially launched its Fearless Prediction Contest. Win $350 if you could guess who will be the next U.S. President. The contest is sponsored by a Boholano, Bran Lorenzo Lucino, a medical student based in New Jersey, U.S.A. All Filipino citizens and former Filipino citizens can join the contest.

While the Holy Name University (HNU) Diamond Jubilee was a success and the Holynamians are still in the state of euphoria (its a milestone to reach 60 as a university providing quality Christian education), two organizations in the university are not in good terms, or, ehem, at war.

Yes, theres a rift between the Central Student Government (CSG) headed by its president Dave Maulas and The Word, the official student publication of HNU headed by Zela Hyacinth Delima as editor in chief.

The CSG has released its official publication, The Tribune (with Prince June Sarmiento as editor in chief) ahead than The Word which released its issue on Feb. 14. It is expected that The Tribune is pro-CSG, while The Word (said to be pro-administration in the past years) is now anti-CSG.

CSG president Maulas expresses his sentiments that The Words issue (distributed during the Jubilee celebration) contains malicious insinuations and manufactured information. They also sent a copy of the CSG complaints persons of sufficient know-how have affixed their signature to justify the claim of the CSG officials.

The CSG asked office of Fr. Felino Javines, Jr., SVD, Vice-President for Administration through Student Affairs head Nilo Bulawin for an immediate intervention. The CSG requested for a dialogue with The Word staff with Fr. Javines and the SAO director.

The CSG is enough with only crying foul to the seeming abuse of power of The Word. This time, we retaliate, Maulas said.

The media is the Fourth State. And, that includes student publications. The student government is the side of the executive arm of the other state. To maintain the respect for each other's standing and position, each has to respect the freedom of expression due. The media is even at the better level of it. By suggesting a form of government and other arguments The Word did not actually dictate the readers.

And the thoughts being printed on paper and not converted to the form of a knife pointed at the audience or readers, did not employ force on persuade other minds. The incident is just all about The Word staff having an opinion, sharing it through the campus paper and leaving the judgment to the readers. It doesnt mean that just because it did not conform to the idea of the CSG presidents opinion, it automatically becomes wrong because the CSG president is not the absolute thinker either.

Heres the winner of the My Unforgettable Love Story contest. The winner will receive a t-shirt courtesy of Mikey Gatal (www.mikeygatal.com) and Island City Mall Screenville Cinema.

Space in the heart

Love blooming on holy week? We have that among the rare ones ever told.

Since I knew her name, Cleng became the byword of every sunshine on mornings that meet me day after day after day. And, it grew into a sonata that lulls me to sleep at night.

A friendship blooming over dinner dates and movie-watching led to late-night romantic talks on holy week of 2006.

She had nothing to do on the holy week, while I had to come up with the ad material for our company over the holidays and finish some partial drafts of the company policies. She asked if we could be together on the holidays. I could have been gnashing my teeth in regret if I wasted that chance.

So, on Maundy Thursday we headed to a remote barangay in Carmen where I occupied a unit of the companys staff house project.

On our way on board a v-hire, sensing that I was sleepy, she offered her bag laid on her lap to be my pillow. And, I lost consciousness to be drowned in dreams of me and her.

The day before, I just got an MIDI player on installment. With an MIDI CD containing 10,000 songs fed on it, she and three other buddies had a good exercise of their vocal chords, while I was finishing what I had to in a corner of the living room. I took a break from time to time, though, to join them, conscious that she might laugh at my do-re-mi but brave enough to send a message.

I really intended to facilitate a sing-along session with her on the microphone, for it was her songs that tempted me to ask for her name and I always have the thought that where there are songs for her to sing, I have the opportunity to hear her singing.

On our last night at the staff house, we had an opportunity to be alone in the room other than where our buddies were staying. That was when I led a conversation into having her telling me, I love you, too before I told her I love you. Just making sure I got an answer before I utter the question. Just making sure I have her before chances slip through my grip.

But that just confirmed the feelings. We actually started confirming the relationship between us in the following week back in Tagbilaran City when we decided to be together and vowed our love to span for a lifetime and even beyond.

The following nights we would talk about becoming both mothers to the child she would deliver later in a few months- -she being the biological, and I would be the not-so biological. She will bear the child from her womb. I would from my heart.

To find a good hint for a good name for the child, we agreed to have an ultrasound on her to see if it had to be feminine or masculine. The long queue at Laos OB-Gyne Clinic teased the thrill. I went out of the clinic for a moment to buy candy at a nearby store. When I went back, I peeped at the door to see her wide voiceless smile and formed her lips into what was soundless syllables of ba-ye (girl).

She told me she was happy that I got my wish and her mothers that it would be a girl.

We went home smiling as we agreed we would be the three angels, considering that Angel is her other nickname, I have the Angel in my Angeline and her mother had been suggesting we should call her Angelaine--Ange from my Angeline and laine from her real name, Arlaine Cecile.

We went home reminiscing how I always insisted it must be a girl in one of our past conversations when we were about to plunge into a deeper friendship until I proposed to be the other mother of the child in her womb which was the first moment she said I touched her heart.

She realized I was touching her heart more when our friendship inched towards a relationship that invites public opinions and judgment, though.

And, the child became the heart of whats between us. We are mothers, we are parents. 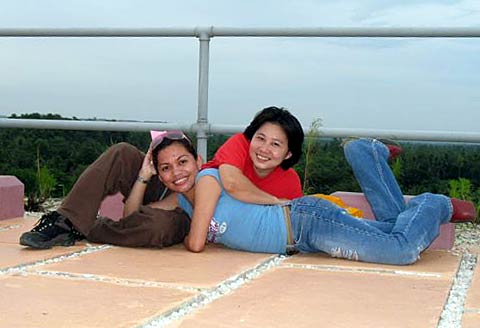 Relics of St. Therese of the Child Jesus in Bohol

A shower of roses is falling down from heavens!

The relics of St. Therese of the Child Jesus from France will be at the Our Lady of Assumption Church (Dauis Church) on Feb. 27-29.

Brought up in a home of faith Therese of the Child Jesus showed her vocation early in her life. She was educated by the Benedictines.

At fifteen she was admitted to the Carmelite Convent at Lisieux, where two of her sisters were already admitted.

Saint Therese of the Child Jesus preferred the anonymity of the cloister. She never went on missions; never founded a religious order, never performed great works.

In the brief 24 years that she lived on this earth, her graces touched the lives of so many. She was devoted to simplicity and in the service of God accomplishment of small duties. She is better know as the Little Flower of Jesus.

Yet 28 years after her death, the public demand was so great that Saint Therese of the Child Jesus was canonized.

Meanwhile, heres a novena to Saint Therese of the Child Jesus:

O Little Therese of the Child Jesus, please pick for me a rose from the heavenly gardens and send it to me as a message of love.

O Little Flower of Jesus, ask God today to grant the favors I now place with confidence in your hands... (mention specific request)

Saint Therese, help me to always believe as you did, in God's great love for me, so that I might imitate your "Little Way" each day. Amen.

This article has been viewed 62 times.