True: Ghost in the city and other juicy items

Whoopi Goldberg was so fabulous in Ghost, that I'm still quoting her lines from, like, 1988.

"I signed the wrong name."

Well, like in the movie, the illegal recruiter is now a ghost, who remains at large, and fled with no less than P2 million who victimized some 18 care-giver students who were expecting to land jobs in Canada.

Theiss enrolled at CanCare Tagbilaran last week of January. She was introduced to her classmates at CanCare as the wife of a certain David Thiess who operates a home for the aged in Canada.

When my Mama Inday learned the issue, she swiftly pointed out that Betty has always struck me as a nice person. And I also know Sir Linos good reputation since I was a kid.

It was horrible, Betty said when I asked her about the issue. And shes a little bit affected. CanCare is Bohols most experienced training center for caregivers that is registered with the Technical Education Skills Development Authority (Tesda) to offer caregiver course.

We will continue to give the best for our students, Bettys inspiring words.

Like nurses, services of caregivers are also in demand abroad. Thats why caregivers centers are spouting hereabouts, however, Cancare was established in 2001 by the Tinios along Gallares street using the ancestral house of Bettys father Luciano Pamaong whos in Canada.

There are many ghosts like Theiss in this world and we need to be careful. The Bible says: "My people perish for lack of knowledge."

Hint: Read, read, read, research, research, and investigate. You may go wrong, but very unlikely says a friend. Report to authority when you doubt the person identity. Or you can visit www.cic.gc.ca for further information. You can check the Canadian Yellow Pages for contact details of companies, Canada 411 for private phone numbers, and also use internet search engines to your benefit.

Could it be true that the Botika sa Katawhan rally held last Friday along B. Inting Street, Tagbilaran City was compulsory? True received a text message from a reader who shared her sadness that is she failed to attend the rally her blue card health program will not be honored. Her barangay captain told her that attendance is compulsory.

Take note, its Botika sa Katawhan and not Botika ng Bayan as many are confused of the two. The former is a project by the city hall and the latter is a pharmacy.

But a check made by True last Thursday revealed that only few actually attended the rally. Why? Perhaps, most of the people were busy working.

It may be recalled that City Mayor Dan Lim and civic-leader Mariano Uy declared the temporary suspension of operation of the Botika sa Katawhan until the issues raised by Councilor Rama are resolved.

Right after the council struck down Rama's proposed measure, Kag. Oscar Glovasa filed another resolution requesting the mayor and Uy to re-open the Botika. No wonder during the rally, a large streamer depicted Councilor Djingo Rama as a boar and Councilor Edgardo Kapirig as a bull. A slogan read that these councilors have no contributions to the Botika sa Katawhan. (Oouch! But it is really for the poor or for some?) 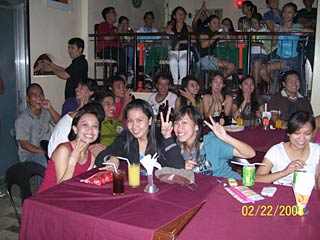 Cafe Anembo is the city's newest place to unwind. It is located along J.A Clarin St. Tagbilaran City. Acoustic Night every Wednesdays and Fridays, and Comedy Shows at Saturdays.

Café Anembo has celebrated its first month sarry yesterday, (it opened on Feb. 8) together with Cafe Anembo's resident stand-up comedians and Bohol's uprising Hip Hop and RnB artists featuring Disciples Clique and La Familia Trublu Boholanos. It was hosted by Inday Ruffing. The event was entitled Laughs and Rhymes.

Everyone is reminded that it will be an Acoustic Session entitled "Switch Off" on March 28 with special guests Suitcase 101, Brownbuds, Mendels Legacy, Pirates of the New Age, Weeping Candle, Blank Item, No Pets Aloud, Manok ni Ambo and many more. 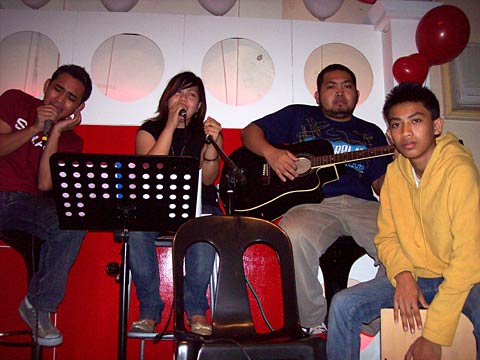