Rice is the staple food of the Filipino. Any meal without rice is incomplete and unsatisfactory even for the healthy Filipino. In Vietnam, people will greet you, Have you eaten your rice?

I think Im not affected of the present rice shortage--Im on diet! And I eat potatoes instead. Anyway, this was my joke during the presscon conducted by the Bohol-Tri Media Association (BTMA) held last week at the Island City Mall.

BTMAs president Peter Dejaresco, BTMA board of director Loy Palapos, mediamen and resource persons were there to discuss and find ways of the rice crisis.

NFA assured the public that there is no rice shortage in Bohol and the public needs not to panic. So, there is enough rice for everyone.

I remember that only a handful few eat NFA rice. People, especially those in the higher strata were thinking that NFA rice is only for the poor. Its only during crisis that people are forced to eat NFA rice because of unavailability of rice or the price is high.

My friends told me that NFA rice is not safe. When I learned that theyre underweight of eating NFA rice everyday, I wished to believe. I mean, its not good for the health because its stored for a long time and theres a chemical mixed in it to preserve it. Remember, NFA rice has a yellowish color or sometimes grayish.

Is NFA rice safe to eat?

The NFA recently released a press statement that cooked iron-fortified rice slight discoloration is safe. It assured the public that the slight grayish color of cooked iron fortified rice is natural and safe for human consumption.

The agency's technology resource development department (TRDD) said that when rice turns slightly gray in color when cooked, it means that it is fortified with iron. The gray color is the most outstanding physical characteristic of rice fortified with iron but this does not affect the taste of palatability of the staple.

The NFA explained that the food agency is using ferrous sulfate which is a very difficult iron source to work with because of its reactivity and fast oxidative nature. However, it is cost-effective and can be easily absorbed by the body. All other iron sources such as ferrous gluconate and ferrous fumarate produce the same grayish color.

Any discoloration is expected since any color variation is noticeable on white rice background. Iron is a good source of nutrient to prevent iron-deficiency anemia which is common among children and lactating mothers, the NFA also said.

The NFA's iron fortification program is being implemented in compliance with the Philippine Food Fortification Program which requires household items such as rice, sugar and cooking oil to be fortified with iron and Vitamin A. 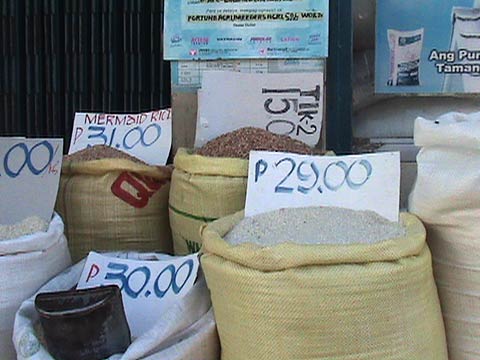 "We have many ongoing programs as far as hunger mitigation is concerned. We have Tindahan Natin, which is an outlet for NFA rice and other commodities at a low price. Our actual problem is not the building the Tindahan Natin but supplying it with rice from NFA, the NFA noted.

So far, in Bohol there are 37 parishes for the Bigasan sa Parokya, therere also 200 dedicated outlets of Bigasan ni Gloria sa Palengke and Tindahan Natin. These outlets are mostly located in the depressed areas which offered low-price of NFA rice.

Therere also tendencies that other people may take advantage on this situation by making the NFA rice with commercialize rice. So NFA regularly have palengke watchers to monitor the rice price.

Importation is not the solution to the rice crisis. It is an opportunity for exploitation and corruption. What government must do is ensure rice self-sufficiency through increase irrigation, post- harvest facilities, farm-to market roads, said Paul Borja, Southeast Asian project of the Community Biodiversity Conservation and Development (Searice) Policy Officer when he was interviewed by a TV network on rice crisis last April 9.

Borja stressed that Philippines as net importer of rice, and number 1 importer is affected by increasing price in the world market. Productivity is not a problem as we are number 2 next to Vietnam. But, we do not have enough irrigated areas unlike Thailand which has around 10 million hectares.

Based from our data, production has been steadily increasing over the last years. But how come we import rice? - Because rice is a political crop and more than 40% of the daily expenses are spent on food.

Farmers have been reportedly benefiting from the increase in rice prices but we consumers have to be fed and depend on rice.

Government should watch out of the rice hoarders, as this is not the time to exploit the situation. We all know that the Cartel exists. They have been there for the past decades but there seems to be no political will to prosecute them for this economic sabotage.

Importation, despite at this point, necessary should not be the policy as it is subject to Corruption with a lot of negotiations being done. On top that people will speculate because of the transparency issues in the programs being implemented like the Hybrid Rice.

In 2006, Id visited the town of Bilar, which boasts of 262 varieties of rice that come in different shades of white, red and purple, of which 64 are planted in plots if its farmers. Bilar, which is considered as rice heritage in the Visayas region has the seed bank, cared for by the Central Visayas State College of Agriculture, Forestry and Technology (CVSCAFT). Bilar farmers readily get seeds from the bank to try out in their farms or to crossbreed with other varieties to produce their own.

It was in 1995 that Bilar was left with just three traditional rice varieties planted in a few plots. The majority of the rice fields were planted to just one typeIR66that required plenty of fertilizer.

The farmers here welcomed the entry of Searice to Bilar in 1996. Searice is a non-government, nonprofit organization working for the preservation of community plant genetic resources to promote agriculture practices that do not heavily depend on fertilizers and are safe on humans and the environment.

Searice chose Bilar as the site in the Philippines of the Searice because of the very low genetic diversity in the town when the project started in 1995.

Bohol is an agricultural land. Let us make use of our land, stressed Vice Gov. Herrera.

On the other hand, my sis Arlene likes to make ampaw from rice leftover (bahaw) as her way of saving rice. She makes ampaw every afternoon for the kids and adults in the compound. I call it rice caramel. Sweet

Amid the continued increase in the prices of rice, let us not waste our rice. Rice is life.

This article has been viewed 220 times.