It was a running joke in Capitol that startled some employees to reality. It's about their, well, getting heavier and heavier you know. For a while, they shrugged off co-employees picking on them being a fatso because making fun of each other has become part and parcel of everyday's life. But the mirror doesn't tell a lie. Looking at themselves, many (and more!) are ballooned to more than 210 pounds!

Last year, there was a request (appeal?) from the employees, staff and casuals to the Sangguniang Panlalawigan to allocate an area, room or place within the Capitol Building as a fitness center. But it didn't happen. The request says, "where equipments such as but not limited to treadmills, barbells, dumbbells, stools, benches, bars and free weights could be placed for the use of all employees and workers within the Sanggunian or for those who work within the capitol compound if so desired."

A minimal fee could be charged for the upkeep and maintenance of the equipments.

What prompt them to value wellness (knowing that they can't resist fiestas and birthdays)? Here are their reasons:

Can we guarantee the employees to serve the public effectively and efficiently if ever, that is a big if, the SP will allocate a room for the gym? We don't want to sickly employees and we just hope that this will benefit everyone and not just for some. Paging board members Aster Piollo and Jane Censorial Cajes!

I just watched The Curious Case of Benjamin Button (and other movies like Bedtime Stories and Slumdog Millionaire). I don't want to preempt the film (the movie is still to be shown at Bohol's modern cinema, the Island City Mall on Jan. 21, be there to experience the Pitt mania to boil! ) but everyone is talking about it since last year. It's a visually well constructed film that is constantly entertaining. 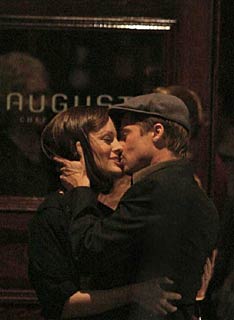 The Curious Case of Benjamin Button is a visually
well constructed film that is constantly entertaining.

The Curious Case of Benjamin Button is a 2008 American film, very loosely based on the 1921 short story of the same name written by F. Scott Fitzgerald. The film was directed by David Fincher, written by Eric Roth, and stars Brad Pitt and Cate Blanchett. The film was released on December 25, 2008.

Brad Pitt's performance is so gracefully convincing, that you can't help but be wowed over and over again.

The film allows us to take two journeys simultaneously -- one physical, and the other psychological. At its core, The Curious Case of Benjamin Button is an inventive and involving mortality fantasy that isn't as much about the eponymous protagonist as it is about the people he meets along the way in life, and the profound effect they can have on his existence and world view -- even if their names tend to escape him from time to time. Benjamin Button came into this world with the body of an old man, but the spirit of a newborn child.

The story begins with the birth of the protagonist, Benjamin in 1860. Benjamin is born with the physical appearance of a seventy-year-old man, and when his father first visits him mere hours after his birth he is already able to speak. To avoid embarrassment, Benjamin's father forces him to shave his beard and dye his hair in order to look younger. He also forces Benjamin to play with the other neighborhood boys, and buys him toys and orders him throughout the day to play with them. Benjamin obediently plays with them, but only to please his father as Benjamin has more joy in smoking his father's cigars, reading encyclopedias, and talking to his grandfather. He is even sent to kindergarten at the age of five, but is quickly withdrawn from the class after repeated instances of falling asleep during kid-oriented activities.

As the story progresses it soon becomes apparent to the Button family that Benjamin is aging backwards which astounds them beyond belief. At the age of eighteen he enrolls in Yale University. However, having run out of hair-dye on the day that he is supposed to register for classes, the officials at Yale send him away believing that he is a fifty-year-old lunatic.

Several years later, while attending a party with his father (who now looks to be the same age as Benjamin), Benjamin meets the young Hildegarde Moncrief, the daughter of a respected Civil War general. Hildegarde tells Benjamin that she would rather be with an older man because they treat women better. He dances with her, and they quickly fall in love and marry. Benjamin soon takes over his father's hardware business, and he proves to be highly adept at the job, while growing fabulously rich.

As Benjamin "grows younger," he begins to feel healthier and happier, as Fitzgerald says, "the blood flowed with new vigour through his veins." However, his wife ceases to attract him as she ages, and he soon decides to fight in the Spanish-American War. He serves with great distinction and receives a medal for a wound he received at the Battle of San Juan Hill. When he returns home his relationship with his wife deteriorates further, and he becomes more detached from her. He often leaves the house and goes to lavish parties and dances, while his wife is more settled in her ways.

In 1910 Benjamin turns over control of his company to his son, Roscoe, and enrolls at Harvard, with the appearance of a 20-year-old. His first year at Harvard is a great success, and he dominates on the football field. However, by the time Benjamin reaches his senior year he is a frail sixteen-year-old too weak to play football and barely able to cope with the academic load.

Benjamin returns home, and as the years progress he goes from being a moody teenager to being a young boy and is reluctantly cared for by his son. Eventually, he looks to be the same age as his own grandson, and even attends kindergarten with him. As his body grows younger, Button slowly begins to lose his memory of his earlier life. The toys and games that he spurned as a newborn begin to interest him. As he reaches the end of his life he becomes a baby, and his nurse Nana takes him for walks and teaches him to say words. His memory deteriorates to the point where he can't remember anything except the immediate present, and eventually, all goes dark.

I'm very sure you're familiar with Balik Medical Mission. It is one of the many projects initiated by the HomeReach Foundation to provide healthcare and surgical services, medications, surgical supplies and equipment for use at local hospitals.

HomeReach is composed of group of volunteers who often come together some   evenings after work, even weekends into nights, sorting-and-packing materials for distribution to healthcare, education, livelihood and patrimony (Help) sites, or sharing ideas and experiences.

Another noble project of HomeReach is the Foster Parents Scholarship Program (FPSP). The FPSP was first organized, developed and created with love and prayer of the Bohol Circle of Eastern USA to provide high school and college scholarships and mentoring to low-income, high-potential students. HomeReach was among the staunch supporter of the scholarship program to build and sustain public understanding of the need for higher levels of educational attainment and lifelong learning.

The scholarship program is headed by Dr. Pepe Recitas and chaired by US- based computer analyst Manny Cempron. Roy Mondragon is the local coordinator and the "father" to the growing scholars.

The scholars who came from different towns of Bohol and other provinces have endless potentials. Last Christmas, one notable deed they had was spending time and giving joy to kids with disabilities at the Breaking Barriers for Children and Youth at K of C, this city.

To know more about HomeReach and the Foster Parents Scholarship Program, you can visit www.homereach.org. 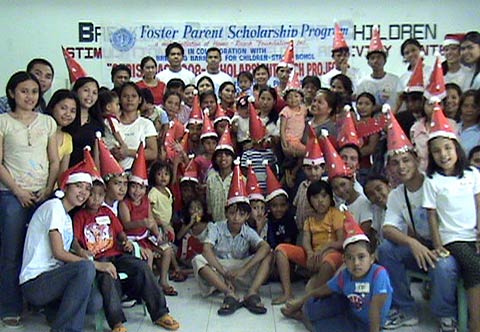 The HomeReach scholars with the staff and kids of the Breaking Barriers for Children and Youth.

This article has been viewed 24 times.