Flash report: Inabanga, the Jumamoy country and home of the youngest mayor in the Philippines is making another "history" and adding yet another feather to its already well-decorated cap as it unveiled the longest continuous handwoven raffia in the world on June 29. The event was witnessed by townfolks and local leaders including Vice Governor Julius Caesar Herrera, Rep. Edgar Chatto and wife Pureza, provincial administrator Tommy Abapo (who represented Gov. Erico Aumentado who's in the US for the Conbusac gathering), Inabanga Vice Mayor Wenceslao Lao and the SB members, DTI regional director Aster Caberte, provincial board members Roygie Jumamoy, Ma. Fe Lejos, Amalia Reyes and Ae Damalerio. 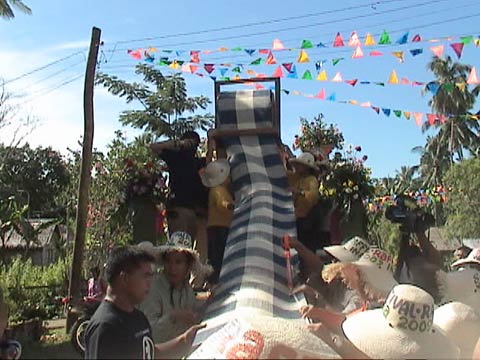 Mayor Jose Jono Jumamoy said that the event is "promoting Inabanga as raffia capital not only in Bohol but to the whole world...and helping livelihood."

Locally known as "buli", raffia weaving was introduced in Inabanga in the early 1800s during the time of the revolutionary Francisco Dagohoy.

While in Manila, the pageants have become interesting items four our paisanos. The gathering of "beauty fanatics" turned out to be of juicy items and anecdotes including the "Miss HNU/DWCT beauties at their best... through the years" which can be accessed at YouTube (a brief narrative that is laden with rare vintage photos on the winners of Divine Word College-Tagbilaran City now Holy Name University). 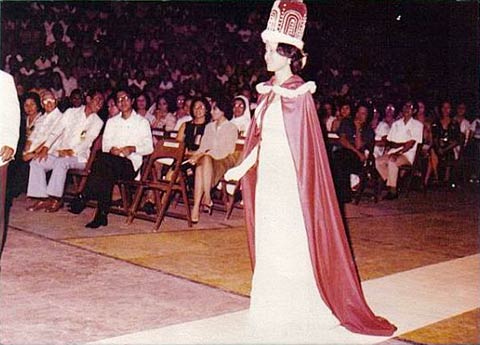 Letty Tinampay during her farewell walk as
MS. DWCT 1976-1977 and to relinquish her crown and
trophy to the New MS. DWCT. 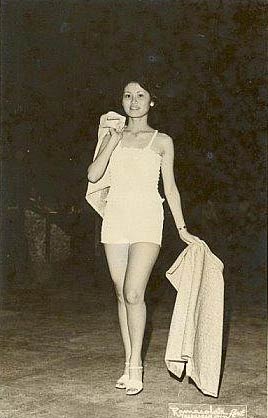 Considered one of the classiest Miss DWCT
winners ever, Letty Tinampay came from one of the
socially-prominent clans of Tagbilaran City.

Ms HNC 1962 Barbara Gonzaga-Ong and Ms DWCT 1965 Mediatrix Gonzaga-Ngo come from a family known for its women ?of beauty, brains and breeding. Mrs. Ong is one of Bohol's most respected businesswomen.

However, the most prominent and elegant beauty queen according to "beauty expert and wellness guru" Raul Gatal (who compiled a story about beauty queens) is Letty Tinampay who came from one of the socially- prominent clans of Tagbilaran City. I heard about her from "beauty fanatics" yet I don't have time to interview her. 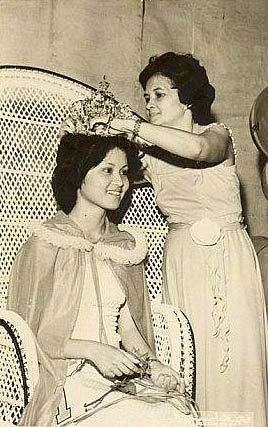 It was in 1976 when Letty was one of the nominees for MS. DWC-T. "I was called by the Dean of the College of Commerce Mrs. Praxedes Lopena and was told that I was chosen to represent our college in the annual search for Miss DWCT. When I told my parents about it, they did not like the idea especially my father, Atty. Sulpicio A. Tinampay.  So, I told our Dean that I cannot join.  Then, when I came home one night from school, I was surprised to see our Dean Ma'am  Lopena ,together with the rest of the faculty members of the College of  Commerce, at our house to see my parents and to try convincing them to allow me to join.  Consequently, Pa and Ma couldn't say no to them, but with some restrictions on my participation to the contest.  I was not allowed to wear tube without strap. So, you will notice I was the only one among the candidates wearing tube with straps," Letty told Raul.

The Miss DWCT Pageant was held at the time when Martial Law was at its peak after Marcos' declaration. The question coming from the chairman of Judges was "Are you in favor of lifting up Martial Law NOW.  If you are in favor give your reason, why, and if not in favor, why not?"

"My answer with no Ahh.ss.. and no OHh.hs," Letty told Raul, adding, "Answer  straight to the point was No, I am not in favor of lifting up martial Law now since the people are still adjusting from the old society to the new society. We have to give time for things to settle down. Thank you.." Letty narrated.

"Letty is happily married and she is based in Ozamis City," noted Raul.

On the other hand, Raul who is Bohol's host shared to us his insights about beauty pageants, saying with pride he has the highest respect for beauty queens and wannabes. 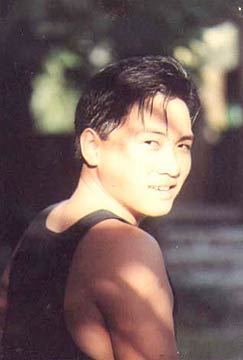 After almost 20 years of hosting, organizing, and judging beauty pageants, I've developed nothing but the highest respect for beauty queens and wannabees.

You want to know why? First of all, the mere though of parading in front of thousands of critical and self-righteous pairs of eyes is enough to drive one crazy. Secondly, the jeers, sneers and snide remarks from the people would smash one's self-esteem to smithereens. Third, everyone awaits with bated breath if a poor contestant will fall on her face or tumble down from slippery steps from the stage which I strongly suspect have been designed by a sadist and meant to make the poor girls fall.

With regards to the humiliating question and answer portion, I believe some of the tongue -tied candidates are not really stupid nor were they absent during their grammar classes  in  high school and college... it's just a matter of tension, sheer nervousness, and mental block. By the way, why do we equate fluency in English with intelligence? Interviews should be based  on the candidate's personal data, let us stop asking questions about global warming, the economic crisis that is besetting the world, political  views, and even world peace... for one, this is not a quiz bowl, this is a contest on pulchritude, poise, and personality... As long as a candidate can express herself in passable English, then it should be enough.

Lastly, a candidate is crowned as the queen not because she is the most beautiful nor the smartest; it's a matter of destiny, luck and timing.

This article has been viewed 251 times.