Bared... All set for Ogie-Regine concert

February is the month of love, and sweethearts are busy checking out romantic possibilities for Valentine's Day. Whether you're celebrating with a date, going out with friends or spending it with family, there are many things to do that will get you into the V-Day spirit. Celebrities are busy, too, and some of them instead of spending time for romantic dinners or expensive escapades choose to entertain the music lovers on this important day. 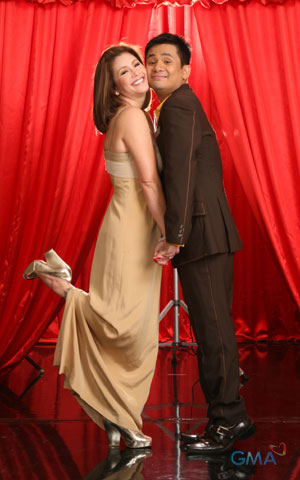 Yes, it's confirmed: sweethearts Ogie Alcasid and Regine Velasquez are coming for a pre-Valentine concert on Feb. 12, 8 p.m., at the Verdant Pavilion of Panglao Island Nature Resort & Spa in Bingag, Dauis town. Titled "Pre-Valentine Concert with the Song Writer and the Songbird," the concert is presented by the Bohol Quality Corporation with Concepcion Carrier Air Conditioning, Creamsilk Conditioners, Sunsilk, Green Cross and Spheron Premium Paint.

The concert is the first in Bohol for 2010. It can be remembered that the BQ Management brought Concert King Martin Nievera in a pre-Valentine concert on Feb 8, 2009.

I'm sure, Ogie and Regine fanatics are counting the days till their back-to-back concert. Even Bared's friends can hardly wait for it.

Seeing Ogie and Regine together on stage will make us fall in love and bring back wonderful memories.

Regine Velasquez (born Regina Encarnacion Ansong Velasquez on April 22, 1970) is one of the finest singer and actress in Asia who rose to fame worldwide by having a magnificent vocal prowess.

After of all the success in her career for more than 20 years in the business, Regine is the only artist who is still active in all the aspects of the business such as in album/concert scene, drama/television shows and also her movies are always successful even if she is already on her late 30's.

Identified as the Ultimate Songwriter, Ogie Alcasid (born Herminio Alcasid Jr. on August 27, 1967), undeniably, has proven a lot ever since he started his career during his younger years. When it comes to singing and creating romantic love songs, many of the listeners were touched and inspired thus making him as one of the singing icons in the country.  However, not only his singing prowess made the audience admire him but furthermore, his comic acting truly impressed the people who in fact want to follow his footsteps as well.

A backgrounder on Ogie and Regine relationship is culled from the website:

Rumors about Ogie and Regine being an item started to get loud in showbiz several months before Ogie Alcasid revealed it in YES! magazine last June 2007.

In fact, during the press conference for the Regine and Robin Padilla movie Till I Met You in the last quarter of 2006, she told the entertainment press, "May boyfriend ako of four years." A non-showbiz guy, according to her.

But the press people, as usual, didn't buy that. They still strongly believed that Asia's Songbird was concealing her rumored boyfriend.

February of the following year, Ogie gave a small hint to the public when he announced that he would have a big revelation in June 2007. No one had an exact idea about it. He just said that it was going to be "big and personal."

The public and the entertainment press waited patiently, but most already sensed that the revelation would be about his relationship with Regine. After all, the rumors had been rife for the last four years, after Ogie's wife, Michelle Van Eimeren, 1994 Miss Australia, went back to Australia.

For four months, showbiz reporters continuously asked Ogie about his special revelation, but instead of giving it away, he chose to keep quiet. When Regine was asked about it, her answer was, "Let's just wait for Ogie's announcement in June."

In the last quarter of May, even before the supposed schedule of the singer-songwriter's confession, YES!'s June 2007 issue already hit the newsstands and bookstores with its headline: "Ogie's June Announcement on Regine: 'I love her, I'm crazy about her.'"

And the rest is history.

How to Hire the Right Publicist

If you are a politician (it's election time and the campaign trail has just begun), business owner, author, musician, actress or artist, you probably know how crucial it is to seek publicity. Advertising either costs too much, doesn't do enough or doesn't work for what you needand you don't have the time to self-start a publicity campaign to get the PR you need to make your career a success. This is why you need a publicist to do it for you.

If you can afford to hire a publicist, read this courtesy of M. Loring Communications:

Good publicists can deliver a sharp telephone pitch within 30 seconds time and get the exact point across, create a top-notch media kit (an EPK- electronic media kit if you are on a budget) that media will enjoy and actually take the time to read, know how to save money promoting you when possible, know what one needs for a PR campaign and understand the timeframe to do it, have media contacts at newspapers, magazines and TV stations in the areas where you want your story to appear--or at least know how to get the contacts when needed, write enticing emails to grab one's attention, know the best ways to contact media, care about who you are and what you or your project is about, and take the time to make sure you are satisfied as a client.

Here are some red flags in potentially bad publicists: Act anxious, pushy and rude, seem inexperienced because they say that they can do anything, write with many typos and misspellings, do not offer to explain their time spent on a project, pretend to be buddies with everyone in the media, expect a hefty retainer off the bat, constantly act as if they can be the direct contact for casting, interviews or placements.

Bad publicists will waste your time and money and damage your reputation, reversing the entire purpose of you seeking publicity in the first place. A quality publicist is like paradise for most people. The hard work and persistence returns with free publicity for you or your project, service or cause. Many people make the mistake of hiring a publicist just because they promise instant fame. A good publicist knows not to make extreme promises of fame. They understand that it takes time and effort and the bottom line depends on someone else entirely. PR can be a hit and miss even with the best publicists, but if you take the time to work as a close-knit team, the outcome should always be very positive and fruitful in the end. It does not matter how many contacts they have, it does not matter if they have done it for years. They just need to have the "it" factor-- smarts, spice and wit. You will know if it is there. If they are on target, you should see long term results.

For me, the management should look for a publicist who I think the best publicists are the ones who can think outside of the box and ones who are adept at prioritizing and time-management. Efficiency is a huge asset!! Also, you have to be very proactive and treat people they way you would want to be treated.

This article has been viewed 99 times.