Try singing or listening to this as you gaze upon the stars in a quiet night... you can make a reflection (mag-muni-muni) and you can make a wish if there is a shooting star.

I've been watching the heavens to look for stars and planets as they are visible to our naked eyes in the night sky this February. Stargazing enthusiasts may have a grand time identifying the planets like Mercury, Venus, Mars, Saturn, Uranus and Jupiter.

Stargazers can also see the famous equilateral triangle or "Winter Triangle" will be visible throughout the month according to the Philippine Atmospheric Geophysical and Astronomical Services Administration (Pag-asa). The Winter Triangle includes Betelgeuse, the super giant red star and the prominent star of the famous constellation Orion, the Mighty Hunter, Sirius, the brightest star in the sky of the constellation Canis Major (the Big Dog), and Procyon, the brightest star of the constellation Canis Minor (the Little Dog).

There are a lot of boulders, rocks and impact debris at the Concepcion crater at planet Mars. It's the fact that these rocks are sitting so exposed, and arent covered by dust, that suggests the crater is very young - well, very young in martian terms, still ancient to us! Bohol has Chocolate Hills, so now does Concepcion crater, too! Photo: JPL/NASA

It's easy to spot planet Mars because our Science teachers told us that Mars is a red planet because its red color has to do with the color of its soil. There are explorations to look for a possibility that there is life in Mars. As of lately, I got curious from a news shared to me by Jeroen Hellingman (who created the famous website www.bohol.ph) that the National Aeronautics and Space Administration (Nasa) is now naming features on Mars after places in Bohol! The features inside the Concepcion crater of Mars are to be named Chocolate Hills of Bohol. Is it, yes, the small island of Bohol will conquer the universe?

Nasa's Mars Exploration Rover Mission (MER), is an ongoing robotic space mission involving two rovers, Spirit and Opportunity, exploring the planet Mars. It began in 2003 with the sending of the two rovers - MER-A Spirit and MER-B Opportunity - to explore the Martian surface and geology.

Mars has hundreds of thousands of craters. One is "Concepción," a very young 10-meter (33-foot) diameter crater. Last week, Opportunity (Oppy for short) had roved to the edge of a very fresh crater named Concepcion and begun to gather the images necessary for a full-color panorama. This part of the panorama includes half of Concepcion with its blocky ejecta. On the horizon are the hills formed by the raised rims of two distant craters, Endeavour (Opportunity's goal, still about ten kilometers away) and Iazu.

The Road to Endeavor blog (http://roadtoendeavour.wordpress.com), a blog dedicated to following the Mars Exploration Rover 'Opportunity' said that "Some of the rocks at Concepcion Crater have actually been named the "Chocolate Hills"! Why? Well, according to my great friend and fellow Mars explorer, Rui Borges, the sailing ship, Concepcion, after which this crater has been named, was burned on an island in the Philipines, called Bohol Island, and now, thanks to Rui pointing this out to the MER team, some of the rocks being seen by Oppy are being named after places and features on that island. The island has some hills called the Chocolate Hills, so now does Concepcion crater, too!"

The International Astronomical Union (IAU), which fosters international cooperation in astronomy among its member countries and individual scientists, is ultimately responsible for naming land features on planets and their moons. They give names to features near the rovers for convenience. It will probably take some time to land on the official sites. 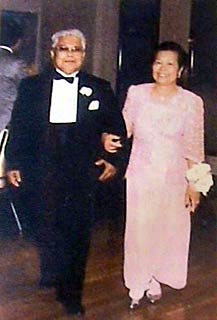 The late Natalio Dahab Tabacco
(with wife the late Venancia Catay)
was the first Filipino to own a
property in the moon.

Speaking of celestial bodies, the very first moon landing of the Apollo 11 mission was in 1969. Neil Armstrong was the first man to set foot on the moon with his now legendary words "One small step for man, a giant leap for mankind." While the Americans conquered the moon, the same year a Filipino conquered the universe through Gloria Diaz who won the Miss Universe crown in 1969.

And, here is another trivia: The first Filipino to own a property in the moon (the celestial object orbiting our planet Earth) is a Boholano. Natalio Dahab Tabacco, a World War II veteran from Taloto District, Tagbilaran City bought a property at minimal cost. It's the thought that he jumped at the opportunity when the idea was no farfetched. And he had a title to show his claim.

Natalio was the first Filipino International Civil Service Career person hired by the United Nations (UN) during its founding years in 1946 and serving until his retirement in 1978. Tabacco received the UN Peace Medal for Outstanding Service to the UN in 1976. This is the highest Medal of Honor given to an individual working for the cause of international peace through the UN.

It can be remembered that the Chocolate Hills of Bohol was voted out in the New Seven Wonders of Nature. However, the next time you sing "Twinkle Twinkle Little Star," Chocolate Hills are in Mars!

This article has been viewed 105 times.