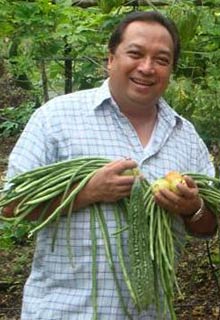 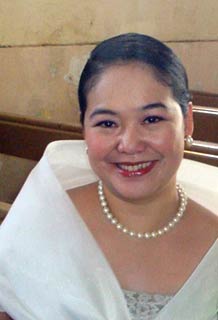 Fiel Angeli Araoarao-Gabin has revealed that she is looking forward to her 40s.

The Miss Tagbilaran 1987 and winner of numerous awards who will be 40 on Feb. 24 (but she doesn't look it, does she?), says that she is excited about her future with husband Engr. Jerome John Gabin and daughter AJ Wincielou Johanna "Cielo" (who was 3rd place winner in China Primary Math Olympiad, Tianjin, China in Aug. 2009 and individual top scorer in Tagbilaran City Schools Division MetroBank-MTAP-DepEd Math Challenge on Feb.17, 2010).

Age, it seems, has brought a new confidence to Fiel. "Yes, since I've learned many lessons in all those years of meeting people," she explains. "But being 40 is a bit awkward for me - it's the funny feeling when you want to feel mature and responsible about "bigger" things in life and yet, you want to cling to that feeling of being "young." In this stage of my life, my greatest challenge would be to grow old gracefully." 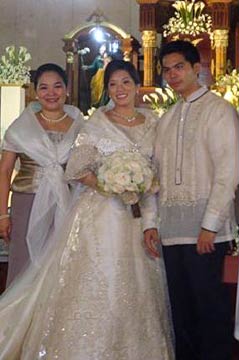 Fiel, a medalist in the Toastmaster speech
contest emceed the wedding of Salipada Cerna
and Nekolai Montero(daughter of Kag. Ondo
and Nila Montero, who is running for Panglao
mayor) wedding last Jan. 30, 2010.

When I ask if younger men continue to make passes at her, she giggles and shyly admits, "I dunno, but most of my friends who saw me as "thin" before would say I've indeed grown sideways, but they say the poise is still there."

"Life Begins at 40" as the song (by John Lennon) goes...Yeah, life begins at forty, age is just a state of mind

To highlight Fiel's birthday, Bared asks her many things (including memorable moments to look back, misty-eyed?). 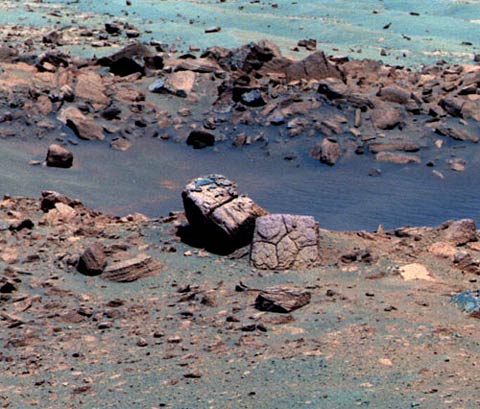 From Marilyn (no family name and address given): In addition to the "Chocolate Hills are in Planet Mars":

Opportunity at a Sweet Spot on Mars (http://marsrover.nasa.gov/spotlight/20100211b.html)

Guess who has a "sweet tooth?" The Opportunity rover on Mars, of course. The robotic geologist is poised and ready to "taste" a rock named "Chocolate Hills."

This rock has a thick, dark-colored coating that is interesting to scientists because many of the rocks in the surrounding area have the same mysterious dark stuff. The coating could be remnants of a layer that was changed by the action of water and weather or, it could be a layer of rock that melted when a meteor (less than a foot across) impacted Mars, ejecting this rock and others and creating the crater "Concepcion". Knowing its origins will help them understand the history of Mars. Opportunity's mission is to figure out the "ingredients" of this morsel by studying the chemicals in it.

And, just where did the name "Chocolate Hills" come from anyway? Opportunity is at the rim of "Concepcion" crater, which was named after one of Magellan's ships. This ship was abandoned on an island named Bohol, in the Philippines. The island has some unusual cone-shaped mounds that are covered in grass. In the dry season, these hills turn brown, thus the inspiration for their name, Chocolate Hills. To chocolate lovers, these features look remarkably like Hershey's Kisses.

This article has been viewed 196 times.