Whether we like it or not, Facebook is the number one social network in the world. People are gaga over this social network that every netizen has his/her own Facebook account. The Philippines ranks eighth among the countries in the world with the most number of Facebook users. 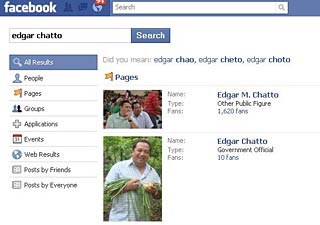 The elections is just three months away so it is not surprising to see and hear political ads these days. But this year's election, more and more politicians are taking their campaign activities online. They are now among the avid users of social networking site Facebook due to the social network's ability to share things to friends and family in very easy ways. 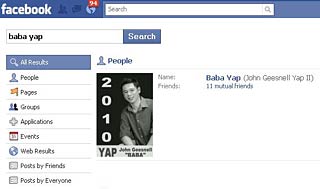 Most of these profiles were reportedly created during the past few months.

Social networking sites like Facebook, Friendster, and Multiply can help voters get to know their candidates more. During the campaign in the last US elections, then candidate Barack Obama utilized Facebook to successfully push his presidential campaign.

Meanwhile, the election war, in case if you haven't noticed, is getting uglier and uglier with the politicians are now mudslinging and muck-raking.

Somebody call for a ceasefire, quick!

The supporters, too, are engaged in "battle" among themselves. At www.tubagbohol.com (TB), the diehard supporters of Rep. Chatto, Vice Governor Herrera, Gov. Aumentado and Rep. Cajes are throwing mad at each other.

Bared won't anymore take up the ugly details. Suffice it to say that the word has degenerated into the personal level and Mike Ligalig (who created TB) had noticed and warned the members to behave or else they will have their account deleted.

"You can talk anything of public concern, of public interest. Just don't use uncivilized words such as "bu****, walay buot, pakno, etc.. TubagBohol.com is not a place for such uneducated language," Mike posted.

Meanwhile, you can continue to vote your candidates at www.dyrdam.com. The website www.mikeygatal.com has also its online election survey.

I am a kamunggay (malunggay) lover. At home, we want to make it sure that there's kamunggay in our law-oy or linabog. Why? Malunggay is recognized as the world's "miracle vegetable, the moringa oelifera plant has been receiving numerous accolades from scientific journals and no less than the World Health Organization for its health and nutritional benefits.

It can do everything-- from boosting the immune system, preventing diseases like cancer, increasing energy and semen count, giving skin a glow, detoxification, preventing allergies/asthma and increasing milk supply of breastfeeding.

The moringa has been found to be rich in vitamins C and A, iron, and high-density lipoprotein or good cholesterol. Moringa provides a rich and rare combination of nutrients, amino acids, antioxidants, omega oils, anti-aging and anti-inflammatory properties used for nutrition. Gram for gram, moringa leaves contain four times the calcium in milk, two times the protein in milk, three times the potassium in bananas, four times the vitamin A in carrots and seven times the Vitamin C content in oranges.

Riding on the malunggay bandwagon, food manufacturers have come up with malunggay pan de sal, malunggay polvoron, and even malunggay ice cream, among other cool products. There is Lucky Me! Noodles N-Rich IM with malunggay.

(Vice-Presidentiable) Senator Loren Legarda loves malunggay that it is a regular fare in her meals. 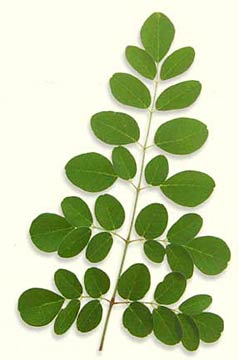 Here is an interesting article shared to us by Lovely Cantiveros (no address given) about malunggay. I'm sharing this so everyone will start eating/drinking more malunggay.

Malunggay or Moringa trees are generally grown in the backyards. The small, oval, dark-green leaves are famous vegetable ingredient in soup, fish and chicken dishes. Scientifically, called Moringa oelifera.' this vegetable, despite its legendary potentials, is still relatively unknown.

Touted by scientists as a "miracle vegetable," malunggay has been promoted by the World Health Organization (WHO) for the past 20 years as a low-cost health enhancer in poor countries around the globe.

According to the Biotechnology Program Office of the Department of Agriculture, the malunggay has been found by biochemists and molecular anthropologists to be rich in vitamins C and A, iron, and high density lipoprotein or good cholesterol.

Due to its high calcium content (four times the calcium in milk), lactating mothers in the Philippines are often advised to consume malunggay leaves to produce more milk for their babies. The young malunggay leaves are being boiled and drink as tea.

Health nutritionists claim that an ounce of malunggay has the same Vitamin C content as seven oranges. An important function of vitamin C not known to many is its being an antioxidant. In fact, it has been recognized and accepted by the US Food and Drug Administration as one of the four dietary antioxidants, the others being vitamin E, beta-carotene and selenium. (A dietary oxidant is a substance in food that significantly decreases the adverse effects of harmful chemicals).

Tender malunggay leaves also reduce phlegm and are administered internally for scurvy and catarrhal conditions, while the flowers are used to heal inflammation of the tendons and abscesses. Unripe pods of malunggay are also reported to prevent intestinal worms, while the fruit also prevents eye disorders.

Other studies have shown that eating malunggay fruits can lead to higher semen count. This is good news for men who are having problems in siring children. They can now count on the malunggay to cork its magic on them.

This article has been viewed 152 times.