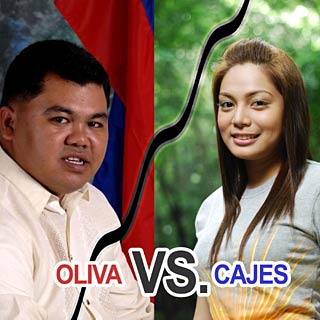 The answer to today's interrogative headline is: Maybe yes, maybe no. Newly re-appointed Commissioner Benjie Oliva for the Visayas of the National Youth Commission (NYC) is maybe riding on the controversy involving Gov. Erico Aumentado and Trinidad Mayor Judith del Rosario-Cajes who are running for representative in the second district of Bohol.

For those who missed last weekend's gabfest on radio (and why we are moved, if we are moved), Benjie was interviewed on dyRD's toprating program Inyong Alagad (hosted by Fred Araneta and Chito Visarra) on his re-appointment as commissioner for the NYC. He surprised listeners when he lambasted Jane Censoria Cajes, Sangguniang Kabataan (SK) national president by calling her ungrateful or who has no utang na loob.

During the interview, Benjie also revealed that he was betrayed by the Cajeses twice. He also questioned the financial statement of SK and the SK National Congress 2008 which invited opposition. He also accused the Cajeses for betraying President Gloria Arroyo and Gov. Aumentado.

Jane answered the accusations in Inyong Alagad with Benjie who was on the other end of the line adding thrill to the listeners worldwide:

Sadly, it was Benjie who brought back a "dead" issue regarding the complaint of the SK that he issued a bogus and falsified a DILG memorandum circular numbered MC 2007-03 dated January 11, 2008 and forged the signature of DILG Secretary Ronaldo Puno. SK sought the non-renewal of Benjie's re-appointment into the Commission because of "incompetence, dishonesty and disloyalty."

"If tinuod na dugay ra ko nasuspensyo. 2008 gi-clear na sa Office of the Ombudsman. Gibalik ko sa pagtudlo as commissioner for three years," he insisted. According to Benjie, the complaint was a long-time plan of Jane and her family to destroy his name and block his re-appointment.

Jane put it on record that a complaint was never formally filed at the Office of the Ombudsman "although there was complaint letter sent to the Office of the President seeking for Benjie's non-reappointment duly signed by the members of the SK national executive board (NEB), the three congressmen of Bohol and by Gov. Aumentado."

Putting the issue to rest, Jane kept her silence. "I told Carl Gumban of SK Iloilo not to file the case, nagpakiluoy ko nga dili nalang dak-on ang issue kay higala nako si Benjie and pareho mi taga-Bohol. We keep our silence kay pareho mi taga-Bohol nga naa sa NYC. We let the time to kill the issue. He owes me an explanation. I took the risk and that's my greatest frustration."

Asked by Chito if Benjie is willing to offer peace and reconciliation to Jane and the Cajeses, he didn't answer but instead quoted Mahatma Gandhi quotes. He further said, "I am betrayed by the Cajeses not once but twice... and if the Cajeses could do it to me, to Pres. Arroyo and Gov. Aumentado how much more to the yanong mga katawhan sa Bohol."

Jane offers peace and reconciliation saying: "To Benjie, I respect you as a fellow commissioner and a fellow Boholano... please don't treat me as your enemy."

Unknowingly, the TextKLamo hot-line was flooded with messages to join the discussion. However, Fred and Chito had to end the interview with unanswered text queries from the listeners. Interestingly, there is one text message which caught my attention that could answer why Benjie reacted that way. "He has a big crush on Jane and sadly he was not able to express his love." Is this true? Maybe yes, maybe no?!?

(Note to Benjie and Jane: The sooner you sort things out and smoke the peace pipe the better for you and for a world already mired in catastrophes, recession and dirty politics. The Filipino youth need you... and remember peace, peace, peace and love, love, love...)

I love Bohol with Kara David 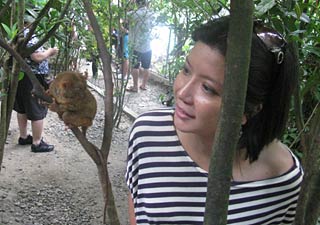 Her first visit to Bohol was when she was a high school student. She was able to visit some of Bohol's important tourist attractions which were not yet developed. When she had the chance to visit Bohol again, she's already Kara David, an award-winning documentary host and reporter.

Kara who pitched for Bohol's Chocolate Hills in the search for the 7 New Wonders of Nature in 2008 and can be seen in YouTube is the daughter of University of the Philippines professor/TV host/columnist Randy and Karina Anne David, who was a former Civil Service Commissioner.

Kara was named The Outstanding Young Men (TOYM) in 2007 and UNICEF Child Rights awardee. She is a regular reporter of GMA 7's 24 Oras, and Saksi and is currently hosting I-Witness and OFW Diaries.

Survival tips for tourists: Love nature! Love your heritage! Kaakibat ng turismo ang pangangalaga sa kalikasan at kasaysayan. The tarsiers are one of Bohol's most precious treasures, let us be gentle to these creatures.

I love Bohol because it's a paradise where you can experience different adventures in just one island -- you can go diving, motorcycling, mountain climbing, swimming, sight seeing etc. Everything is accessible. People are very involved in tourism, active in community projects and proud of their heritage.

If Bohol was a color it would be green.

This article has been viewed 310 times.