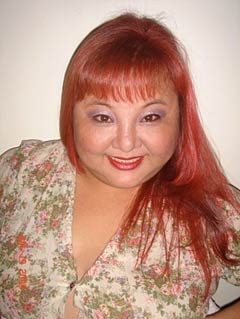 Boholana actress and performer Lailette Geulen-Boiser is slowly stepping back into the spotlight after concentrating in her family life in Bohol, the main reason why for a while she wasn't visible in television.

Known as Scarlet in showbizlandia, Lailette has been keeping a low profile until she was seen lately in a TV series on GMA 7. Her friends and well-wishers including yours truly hope this will mark Lailette's reemergence onto the scene.

She has played roles in a number of movies and TV series, but Lailette is one of the few actresses who understand well the concept of ensemble acting. And with her latest involvement in an indie film Pendong (where she has to play a lesbian to be directed by Shandi Bacolod of highly-acclaimed indie film Ben and Sam) and in a TV series on GMA 7, the important thing is that she gives her best.

This month, Lailette gives us her ensemble acting on GMA 7's Diva, the country's first kantaserye topbilled by Regine Velasquez. She played Sister Bertha together with Radha, Mitch Valdez, Eva Castillo and Pinky Amador who took care of Sampaguita (Regine Velasquez) in the convent. Last week, it was ala Sister Act when a choir was formed to entertain churchgoers.

"Nakakatense, I haven't been singing or performing for more than eight years on cam, puro aktingan lang, but the excitement is there to sing live as one of the guests in Regine's kantaserye Diva on prime-time TV," shared Lailette.

She plays her role, no matter how "small" with such honesty, so natural and so casual as if she's not acting at all. That and we can't help but empathize with her.

"I always feel to give the best that I can give," said Lailette. 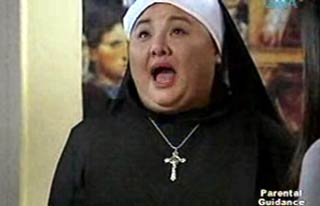 Lailette Geulen-Boiser plays her role with honesty. As a nun in
the first kantaserye on TV, Diva on GMA 7.

Lailette, who is truly excited and proud of her next projects, shared that she is now more motivated than ever to prove that she has more to offer as an artist. "Well, Direk Maryo (de los Reyes) has plans to cast me in some teleserye sa GMA and make my singing active na rin kahit mall and provincial tours along with Masculados (Dos). Freelance pa rin ako at ang Masculados Dos para happy."

Lailette started showbiz as a member of Star Circle Batch 9 of ABS-CBN. As the comedienne in her batch, ABS-CBN casted her on Oki Doki Doc (starring Aga Muhlach, Agot Isidro, Camille Prats, Carmina Villaroel, Roderick Paulate, among others). She also appeared singing in different shows like ASAP, Masayang Tanghali Bayan (MTB), etc. She also did 555 sardines commercial. In 2006, Lailette appeared on ABS-CBN's teleserye Calla Lily topbilled by Sharlene San Pedro (from Mga Anghel na Walang Langit and Goin' Bulilit). She has appeared in Bedtime Stories (2002), Magnifico (2003) and Nandito Ako..Nagmamahal Sa Yo (2009). Before she left for Manila, she had a cameo role for RD Alba's indie film Biktima (February 2010).

Lailette wishes for happiness in all areas of her life. She also said that she has a feeling that 2010 will be smooth going for her.

This article has been viewed 85 times.