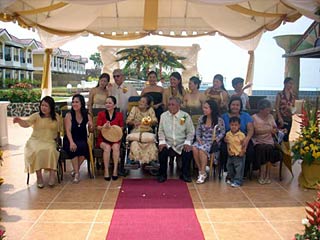 Is it goodbye for the province's wholesome pageant?

The answer to today's interrogative subheadline is: Yes or No. Yes, if, that is a big if, there will elections this October 2010 for the barangay and Sangguniang Kabataan (SK) and another administration will take place (Is Trisha Chatto, daughter of governor-elect Edgar Chatto, running?) and Mr and Miss Teen Bohol is not a priority in his/her administration. No, if, that is a big if, someone like John Torralba will handle it next year (with or without SK's support) to look for sponsors and run the event.

"We hope to see Mr and Miss Teen Bohol next year," said one student from Miriam College who watched the pageant. Jane Censoria Cajes said that the search is aimed to develop the self-confidence of the province's young constituents, and at the same time provide a venue wherein they can showcase their skills, talents and potentials. "They are representing the entire youth of Bohol." 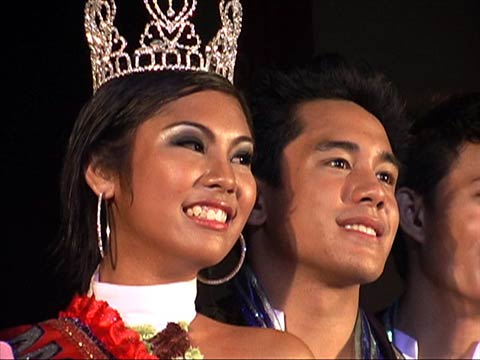 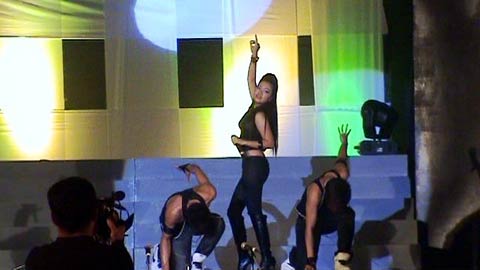 I could not blame rising host Julan Crisale Cordova who said that Mr and Miss Teen Bohol is the most prestigious pageant in Bohol and his co-host Joan Robie Cajes made a second the motion when the pageant venue was super jam packed. Well, the most attended pageant this year. Who could protest when the pageant was successful last May 27 at the Bohol Cultural Center? 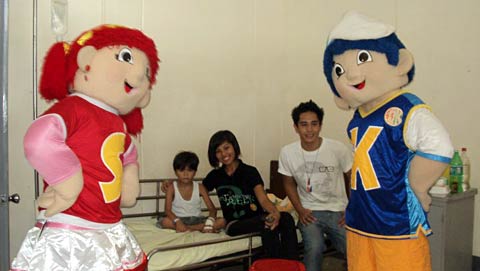 ...At the Pedia ward (with S and K mascot) of the Gov. Celestino Gallares Hospital the following day after winning Mr and Miss Teen Bohol 2010 for their first function. - Gerwin Yudelmo

Here's a look at some of the highlights and the sidelights at this year's Mr and Miss Teen Bohol and what sets it apart from other pageants:

What a busy schedule (ahead) for the winners! The following day, Vence and Jert (who were still sleepy and exhausted) had an outreach program at the Pedia ward of the Gov. Celestino Gallares Memorial Hospital as part of their functions. This what made Mr and Miss Teen Bohol different with other pageants; it has served its purpose. At lunch time, they went to Clarin town to give sympathy to Kim Lara, one of the candidates, whose father died last week (Kim was able to attend the rehearsals and the pageant night).

When Vence and Jert were available for another round of grueling Q&A (thanks to Bared correspondent Gerwin Yudelmo), I told myself they are lovable characters! They were gracious under pressure, poised even under the oppressive summer sun, very confident now that they are titled.

What do you think does the world needs most right now?

Jert: Well, I think what the world needs most right now is love among humanity for we all know that with love, we can have unity and if we are united, then we will live a peaceful life.

Vence: I believe what the world needs right now is faith. In times of struggle and hardship, we need to be strong. We must have faith in ourselves and of course, faith in God.

As Mr and Miss Teen Bohol, what qualities of the Boholano youth would you highlight?

Jert: The qualities I would like to highlight are being hospitable and a strong fighter. Boholano youths are very determined and that's what makes us best among the rest.

Vence: I would like to highlight how the Boholano youth take action and come together and unite to commit to our goals. We are dedicated and true to what we do. We are amongst the hardest workers in our nation.

Who is your role model and why?

Jert: The person that I have been looking up to since before is my mom, Julie Torregosa because for me, she is such a strong fighter. A lot has happened in our family but she kept a tight grip on us. She stood by us against all odds.

Vence: My role model is my dad, Ven Gallego. He has taught me everything I need to know and has always stuck by my side. He has overcome many hardships in his life and never let it get to him. He taught me no matter what happens to you in life, the best thing to do is move on and let that situation make you stronger.

Young people today are liberated and adventurous, willing to try everything. What's your stand on pre-marital sex?

Jert: Well as part of those young people, my stand is that PMS should be a NO NO! But, since we are liberated and adventurous, we can't blame the youth for being curious because that's the essence of our being. What the society can do with that is to let all the youth be aware. They have to educate us with that for I believe that the lack of awareness has been the ultimate reasons why unwanted consequences happen.

Vence: I believe things like that should only happen at the right time. Thought we may be curious, I believe we must practice self control and know the things that could go wrong with PMS. What I believe us youth lacks is awareness. We must be aware and know the results of the decisions we make.

If you were somebody else, who would you like to be and why?

Jert: If I were to be a somebody in the society, I would choose to be any lawyer in the world. I would love to defend my fellow citizen and make sure they don't become victims of injustice. I believe lawyers themselves are somewhat of a hero.

Vence: If I were to be somebody else, I would be any doctor in the world. I would love to be one because I would like that opportunity to save lives. To me, doctors are the real superheroes in our world.

Describe yourself in three words.

Jert: I would describe in these three words: "Simple yet alluring."

Vence: I would describe myself by the three D'S: Disciplined, Determined, Dedicated.

What is your greatest inspiration?

Jert: My greatest inspiration is the smile of other people. It makes me realize that each day is a brand new day. I don't have to mourn and let the past bother me. I just have to move on and let it go, knowing that I still have the right to be happy for myself, which also gives happiness to others.

Vence: My greatest inspiration is my parents, because despite all the hardships and problems life throws at them, they find a way to make life better for my brother and I. I wish for one day, I can return the favor.

If you were to change something in yourself, what would it be?

Jert: If I were to change something about myself, I would change my negative thinking. I think sometimes, I feel so pessimistic about things that I forget to think about the positive side of the issue. I give myself unwanted stresses. But I'm sure with time and maturity, I will learn to become a optimistic and strong woman.

Vence: If I were to change something about myself, I would change the way I handle tight situations. I tend to stress and panic and not get anything done. I need to learn to relax and be easy in order to think straight. Such changes like these come with maturity. I still have much to learn as a young adult.

What will your advocacies be in SK?

Jert: My main concern would be about the environmental problems we are facing for how any years already. I feel we are responsible for the constant destruction of the environment. I should say that we should take the stand and act now before it's really too late. Who knows, we must be the change we wish to see in our world.

What is the essence of being Mr and Miss Teen Bohol?

Jert: Being Ms Teen Bohol is not just having the title, the special treatments, the worldly compliments of others, but it is taking the responsibility to represent the youth and be an ambassadress of good will. This is a time in my life, where I am given the chance to voice out to all the youth out there and take the lead for a better change and I would never ever waste it.

Vence: The essence of being Mr Teen Bohol is that I have the opportunity to be fully involved in my society. It makes me feel good knowing that I am doing good for my community. I feel I can take the lead and can help make changes to things that need to be addressed. Being a Mr Teen Bohol is also a good experience for me and can help me make the transition to being a mature, young man.

This article has been viewed 134 times.