Bared... Voice Clinique kids send their message to the world 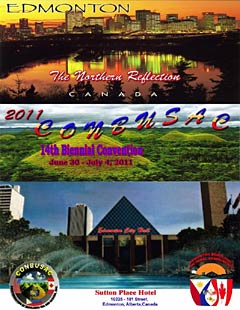 Scene: Our Boholanos in America and Canada are now excited for the 14th Biennial Convention of the Confederation of Boholanos in America and Canada (Conbusac) on June 30  July 4, 2011. It will be hosted by the Edmonton Boholano Cultural Association (EBCA) at the Sutton Place Hotel in Downtown Edmonton, Alberta, Canada. "We expect hundreds of Boholanos from all over the United States and Canada to converge in Edmonton during these days. Once again, we can further strengthen the bonds of friendship, camaraderie, common heritage, collegiality and solidarity of purpose that bind us in the Confederation. With the blessings of the Almighty, we hope to accomplish our stated goals during this convention. And, with your wholehearted support and cooperation, there is no reason why we cannot," said Carlos "Caloy" Cagaanan, president, in the Conbusac website. Gov. Edgar Chatto, Dame Pureza Chatto and Archbishop Barney Auza, D.D., Apostolic Nuncio to Haiti, will be the guests of honor. Archbishop Auza will be the keynote speaker during the family night and Gov. Chatto will be the keynote speaker during the gala night. 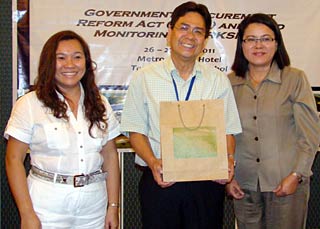 Scene: A workshop on Government Procurement Reform Act (GPRA) and Road Monitoring was held last May 26-27 at the Metro Centre Hotel. It was attended by the business sector, non-government organizations, civil societies and the media. Engr. Huillio Belleza, regional director of the Department of Public Works and Highways (DPWH) talked about the general provisions of GPRA and procurement of infrastructure project. Vivien Suerte-Cortez of Research, Education and Institutional Development Foundation (REID) shared about the Bid and Awards Committee (BAC) observers' roles and responsibilities, tools and tips. Engr. Eduardo Quintos XI also lectured about road monitoring. The workshop was organized by the Bohol Chamber of Commerce and Industry (BCCI) in partnership with REID, The Asia Foundation and United States Agency for International Development. "In line with our vision, the Bohol Chamber of Commerce and Industry is currently implementing the Partnership for Better Infrastructure (PBI) project designed to harness the active participation of the business community and civil society groups, to ensure that critical economic infrastructure are prioritized, budgeted, implemented and completed," said Marietta "Mayette" Sarabia-Gasatan, the first lady president of BCCI.

Participants and speakers in the Partnership for Better Infrastructure workshop organized by the Bohol Chamber of Commerce and Industry.

Scene: The Santacruzan 2011 street parade last Friday had less fanfare and sumptuousness. However, Bohol's Queen of Tourism Rose Soy, who is also the Rotary Queen for the nth time, was elegant in her gown while paraded in a vintage car. "She is ageless. Indeed, the queen of all queens," said a fan.

Seen: Aileene Ella Dango (who represented the municipality of Loboc) and Renee Soraya Rosete Hassani (who represented the municipality of Loay), didn't make it to the final 10 in the Miss Philippines-Earth 2011. Dango was eliminated in the third round while Hassani was eliminated in the fourth phase of the contest. The Renee Soraya Hassani fanpage on Facebook posted: "Message from my niece Renee Soraya Rosete Hassani-"Thanks everyone for the support and prayers. Eventhough (sic) I did not make it to the Top 10, I will treasure this as a once in a lifetime experience and will help me to improve myself in whatever endeavors I will take. Maraming maraming salamat po! :)"

Seen: A part-time model and winner of a campus beauty pageant in one of the universities of Tagbi has been suspected of being a "maya" (gay lingo for closet queen) by his peers and colleagues! "The maya' is secretly dating his co-model. They are seen dining together and holding hands. They are so sweet," shares the socialite VRS. A "maya" likes twitterpating. Tweet! Tweet! Tweet! Clue? The surname of this "maya" sounds like a Mexican telenovela which was very popular in 2000.

Scene: There was no fanfare during the Bolibokingking Festival in Loboc town last May 24. Bolibongkingking is a term applied to the drums and gongs and their rhythm used to accompany the supplication dance ritual in front of the Image of Our Lady of Guadalupe, the second patron saint of Loboc.

The simple premise put forward in the song We Are the World (the We Are the World U.S.A. Aid for Africa in 1985 and We Are the World Haiti, the latest version of the iconic fund-raising all-star charity recording to the benefit the victims of the earthquake in Port-au-Prince, Haiti) could change mindsets and ultimately, lives: "Love is all we need. We are the world. We are the children but we all need to help is what it's really saying?" 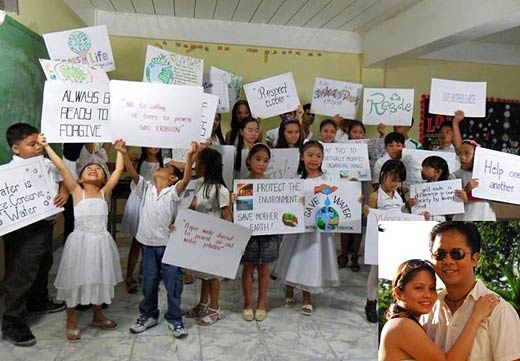 The kids of the Voice Clinique with Butch de Juan organized by couple Butch and Vida May Tirol-de Juan (inset) share their message of love and hope.

Since that song never gets old and very meaningful, it's the choice of the students who participated in the Voice Clinique of Butch de Juan 2011 organized by Butch de Juan, hubby of Vida May "Viday" Tirol-de Juan.

The who si Butch?

Joshibiah "Butch" Gaa de Juan has a Master's degree in Music from the Korea National University of Arts (KNUA). He is presently a professor at the Asian Institute for Liturgy and Music (AILM) and the music director of the University of the Philippines Church of the Risen Lord. He handles the Miriam College Glee Club, the St. Joseph College Chorale and the Chevron MSC Chorale. He is also a freelance composer, arranger, and voice teacher. He has travelled to Sweden, Malaysia, Korea and other countries to hold lectures and workshops.

At one time or another, he was a member of several choirs such as the Asian Institute for Liturgy and Music (AILM) Chorale, UP Concert Chorus, UP Coro Concertino, Philippine Chamber Choir, and the now defunct San Miguel Master Chorale, which was the only professional choir in the country. He sometimes ventures into movies and theater. He once handled a Repertory Philippine's summer production of "West Side Story" and Dulaang UP's production of Bienvenido Lumbera's "Hibik at Himagsik Nina Victoria Laktaw" both as musical director.

Butch also arranged the Iniibig Kita piece for the Harana Singers, the male section of the Philippine Madrigal Singers.

Butch wants to help talented Boholano kids who want to develop their voice to the fullest potential through a voice lesson. And Butch and Viday offered their first workshop last summer to aspiring Boholano kids. Since the first venture was successful, another Voice Clinique with Butch de Juan will be held this October.

"The song is very nice. Before we sang it, we had a session to analyze the lyrics," shared Viday. "We processed the kids for them to understand it better. Naa pa mi history about the song."

They watched all the versions of the MTV, the old and the new including Somo El Mundo, the Spanish version of We Are the World.

Viday asked the kids what they can do to make a difference in the community. "They all got into thinking. Ako sila gipahimo og placards. And they wrote what they can do. We used the placards in the music video," said Viday.

"Simple things but challenging, the song is about "giving" and we can give not just money but ourselves - our talents, our skills, our services, etc" added Viday.

The first soloist sounded like an angel! She's Isabel Iris Garsuta, daughter of Lino and Marissa Garsuta, who has joined singing contests in the city. Then, Hannah Adelit Rodriguez joined Iris and had her solo portion.

Butch did sing and help put the participants through their paces. It was a sweet moment in the stunning video that also showed the kids who brought placards to show their message to the world.

This article has been viewed 96 times.