The search called for women to step into the spotlight and flaunt their evenly fair skin with confidence so they can "live on the lighter side of life." It is also about helping women achieve the even fairness all over they desire, and in the process gain a new-found confidence to enable them to pursue new opportunities and enjoy the good life. 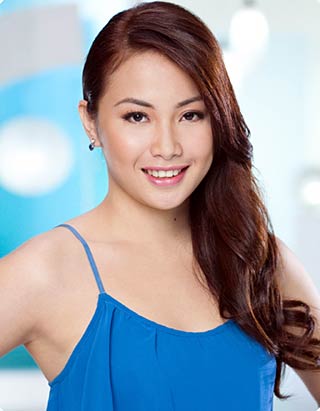 Will Ely Rose Apple Angcon be the Olay Natural White Bar
Ambassador? With your help, it is possible!

Apple, who has a model-like looks and skin that glows with natural fairness says, "In my age there are things that hinders me from going beyond borders, one of which is skin impurities all over but not anymore after I started using Olay Natural White bar. I deserve to rock the little white dress because for me there is no way of being shy at all, no way of insecurities and no way of giving up to domination's in all faces because with Olay I could be the fairest of them all."

The winner will get a custom-made little white dress by Inno Sotto and she will also be featured in a Preview Magazine fashion spread and star in an Olay Natural White Bar TV commercial with Kim Chiu.

The voting period is extended until September 8. What are you waiting for? Vote for Apple Angcon as the Fairest of All. Head over to www.stylebible.ph/olay, register and vote for Apple.

The Holy Spirit School of Tagbilaran is pleased to announce that for their much-awaited project this year, they are bringing in Miss Saigon star and award-winning recording artist Ima Castro for a concert on Sept. 13, 8 p.m. at the Bohol Cultural Center.

"It is our greatest honor to present to you for the very first time in Bohol Ms. Ima Castro," the organizers said.

Ima Castro left Manila in 2001 to star in the UK Tour of Miss Saigon after succeeding Lea Salonga in the role in the Manila engagement of the hit musical.

Ima's first break in the music industry came when she won the grand prize in the 1991 Panasonic nationwide Quest for the Best singing competition.

Her album, "Mamahalin Kita-Ima," became a gold record thanks to her popular duet with Lloyd Umali entitled "Nanliligaw, Naliligaw." Soon after that, Polygram Records decided to make her second album, a self-titled one which was released in 1997. It includes "Shine," her winning song in the 1996 "Metropop Song Festival." She went on to win several local and international awards including Best Singer Award in Osaka, Japan and Best Interpreter in the First Asia Song Festival in Bali, Indonesia.

Theatre producer Sir Cameron Mackintosh asked Ima to join the UK Tour of the show for two years in Manchester, Dublin, Edinburgh, Bristol, Birmingham and Southampton. Later she toured Belfast, Cardiff and other cities in the UK. She also joined the show in Lisbon. She also did concerts in Manila and Tokyo with Russell Watson.

Apart from Miss Saigon, some people are not aware that Ima recorded the romantic ballad You're My Number One with no less than Latin heartthrob-singer Enrique Iglesias (who has Filipino blood running through his veins from his mother's side). Ima has also lent her voice on tracks in albums by Martin Nievera, Nonoy Zuniga, Mike Francis and David Pomeranz.

Though based in London since playing Kim in "Miss Saigon" in 2001, last summer, Ima played in the pop-rock musical Aida and Tony Award-winning play In the Heights. 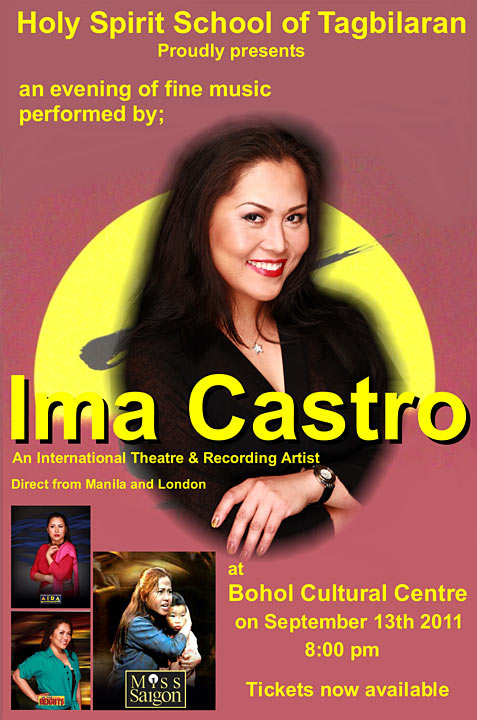 Ima Castro will sing unforgettable hits like Shine and Nanliligaw, Naliligaw in her concert in Bohol on Sept. 13.

This article has been viewed 178 times.