Scene: "An evening of fine music" with Miss Saigon star and award-winning recording artist Ima Castro is on Sept. 13, 8 p.m. at the Bohol Cultural Center. Tickets are priced at Php 1,000 (VIP), 500, 200 and 100 (general admission). For ticket reservations, call Holy Spirit School Tagbilaran at 411-2558 or visit HSS.

Scene: The Loboc Children's Choir (LCC) had their mini-concert at Chiesa di Santi Gregorio e Siro and Cinema Perla in Bologna, Italy last Sept. 8. The "Concert of Sacred Music" featuring the LCC which lasted for 40 minutes featured classical and modern religious songs to celebrate the Nativity of the Blessed Virgin Mary. The LCC members are in Europe for their Europe 2011 Tour. 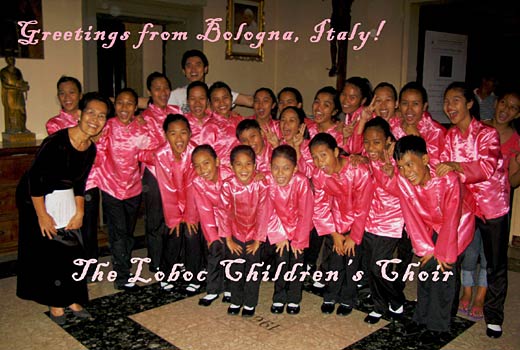 Members of the Loboc Children's Choir wow Italy in their recent Europe 2011 tour.

Seen: So lovingly remembered on her 10th death anniversary was 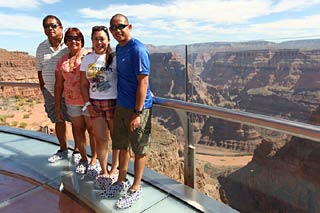 Panglao businesswoman Aniceta "Annie" Nerves Arcay and her
family at the Grand Canyon in USA.

Scene: The first ever "Lindaville fiesta celebration" in the US was held in Newport Beach, California on September 3. US-based socialite Mikey Gatal reported that the people of Lindaville, Tagbilaran City who are now residing in America are united for friendship, camaraderie, laughter, and lasting memories of an enjoyable time away from home. The gathering was initiated by Eve Baura Digal.

Yes, you read the banner correctly. Boholano director RD Alba has a new love and the codename is RSVP. 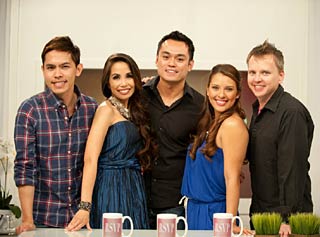 But before you jump to conclusion, let me add that RSVP is not a codename of a person. It's the TFC's newest U.S. based weekly talk show aimed at getting viewers engaged to discuss issues that affect their lives.

RSVP is directed by RD and has Michael Carandang, the Emmy-award winning producer of the "Tyra Banks Show" and America's Next Top Model as its show runner. US-based actress G Tongi is the show host. In an interview with ABS-CBN, Tongi said, "We did an episode where we discussed being biracial. I was really able to talk about that. It was a huge sigh of relief to be able to open up and share that about myself."

Dr. Tess Mauricio, Tongi's co-host is a respected dermatologist in the U.S. who's been a guest on U.S. mainstream shows like, "The Doctors", "The Rachel Ray Show" and "America's Next Top Model" as a beauty expert.

In their premiere season on September 10, former Philippine actress Patricia Javier will reveal something personal that she has kept from the public.

"Our first guest is Patricia Javier she talks about her new life and new beginnings," said RD.

Apart from issues, they will also feature high-achieving Filipinos in different fields with expertise to share to kababayans who want to know how to make it in America.

Said RD: "We invite celebrity guests every week and discuss important topics from lifestyle to fashion to reality."

What motivates him to accept the directorial job?

"It's a different angle on directing. I want to explore and be versatile as much as I can, I wanna say I've done it all: teleserye, movie, talk show," said RD, who served as the associate producer of Panaghoy sa Suba (which was directed by Cesar Montano and also featured him as the lead star) and directed/produced the Kapalaran teleserye on ABS-CBN.

Kent Chester Ochea and Mian Antonette Simporios will represent the high school department in the Mr and Miss UB Personality 2011, one of the highlights of the week-long celebration of the UB Days. 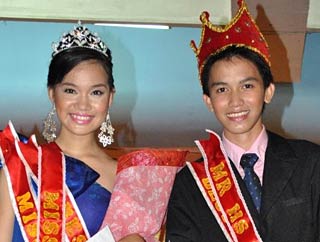 Kent Chester Ochea and Mian Antonette Simporios will
represent the high school department in the Mr and
Miss UB Personality 2011.

"Ochea and Simporios bested other 24 lovely and gorgeous contenders in the Mr and Miss UB High School held August 12 at the UB gymnasium," said Jheinena Cimafranca Clarin, English teacher and adviser of the Penmasters. "This said yearly competition is done as the UBHS fully gears up for the upcoming UB Days celebration come September 16-23, 2011 dubbed with the theme: 'Achieving greater heights; maximizing potentials thru sports and art.'"

The Mr and Miss UB Personality 2011 coronation night is on September 22 at the UB quadrangle. The talent show will be held on September 20.

The Mr and Miss UB Personality is the province's oldest campus pageant. Its metamorphosisfrom RPC Queen (the late Purisima Veloso-Datoy got the crown) to Miss UB Queen (Zenit Cabalit won the title when UB was granted university status in 1970), and was changed into Mr and Miss UB Personality (Margaret Gulle-Pascual won the crown in 1973 and Luisito Ytol won the Mr UB title in 1985 when male candidates were involved making the pageant unique). The candidates are also required to undergo a personality test using the standardized testing tool 16 Personality Factor (16PF).

This article has been viewed 74 times.