Joke 1: (At the Miss Universe pageant back stage...)
Ms. CHINA: Congratulations Angola!
Ms. ANGOLA: Thanks China, you like my crown?
Ms. CHINA: Yes of course, go check what's written on it...
(Then Angola takes off her crown and read the little words on the back.) Engraved on the crown: "MADE IN CHINA."

Joke 2: This alleged statement was aired via NBC News: "I have reservations with the results. If the only basis is the Q and A portion, after having been trimmed down to 5, Ms. Philippines deserved to win. What made her different from the rest is that she had no seconds to rethink of her answer as she had no interpreter to break the ice. The rest had their interpreters and having breaks on seconds to think about their answers. Hands down, Ms. Philippines answered straight to the point." But sorry to burst your bubble, the highly influential celebrity did not actually say that. Answering a query on the alleged statement, a moderator on Oprah's official website Oprah.com said Oprah has not issued "any comments of this nature." OWNModerator13 responded: "There is no truth to the statement. Ms. Winfrey has not made any comments of this nature. Thank you for asking."

Joke 3: According to a very reliable source the main reason why Ms. Philippines Shamcey Supsup's failure to win Miss Universe pageant was her inconclusive response to the Q n A part of the pageant. It had nothing to do with her religious belief but because she does not want to marry the son of the then Prime Minister of Pakistan Benazir Bhutto. Who on earth wants to be called Mrs. Shamcey Supsup-Bhutto. Mas ayaw din pakasalan ni Shamcey si Richard Poon kasi ang full name nya is Mrs. Shamcey Supsup-Poon. Tsaka ayaw din na si Hayden Kho makatuluyan kasi the full name is magiging Mrs. Shamcey Supsup-Kho.

Joke 5: The photoshopped photo of Aling Dionesia Pacquiao being crowned as Miss U winner (with Miss Universe 2010 Ximena Navarette) is widely circulated all over the internet. No, Mommy D didn't win the Miss U!

Everyone is still in frenzy over the recently concluded Miss Universe 2011 pageant in Sao Paulo, Brazil. The country's bet - Miss Philippines Shamcey Supsup - was the third runner-up.

A Penelope Cruz look-alike, Shamcey ranked a place higher than Venus Raj, who was fourth runner-up in the 2010 pageant. Shamcey is the fourth Filipina declared third-runner-up in the Miss U: Lalaine Benette (1963), Chat Silayan (1980) and Desiree Verdadero (1984).

Leila Lopes of Angola, the first titleholder from her country, was crowned the 60th Miss Universe. Aside from Shamcey, the others who are part of Lopes' entourage are: Miss Ukraine Olesya Stefanko (1st runner-up); Miss Brazil Priscila Machado (2nd runner-up); and Miss China Luo Zilin (4th runner-up).

Some Filipino fans have expressed disappointment over her non-title win, despite a good standing throughout the pageant.

"Shamcey's case was the biggest blow, she aced the question but lost," said Raul. However, Bb. Pilipinas-World 2006 Anna Maris Igpit said that "it's not all about the Q&A, it's the overall performance."

But I agree with Raul when he said that for Shamcey to have finished third runner-up was good enough. She made us proud!

"Shamcey did everything right but Angola outshone her because she had that sweetness, sincerity and showed a hint of vulnerability those endearing herself to the judges and to the crowd," said Raul. "Becoming Miss Universe doesn't mean you're the most beautiful or the smartest... it's a matter of luck, timing and destiny. It was written in the stars that Miss Angola would become miss universe," added Raul.

Anyway, Bared asked Anna Maris and Miss Bohol Sandugo 2011 Farrah Faye Mian what they could say and how they would answer the same "tricky" question. 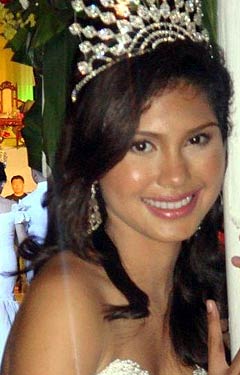 Farrah Faye Mian: 'Even if I were in her place,
I wouldn't have been able to tell the whole world of my
principles and beliefs in such a way that would make me
give up my love.'

Maris: This year's pageant is actually new for me because I was used to the opening number with the candidates dancing and the intro with their national costume, if not, recorded. But I love the pacing, very quick as usual. The dresses (opening) and swimsuits were gorgeous!

Farrah: I think Shamcey did a great job! I know that most people don't really appreciate nor recognize the fact that she was only the 3rd runner up but I think it's one of the greatest feats she will ever earn for this country. Imagine, among all the countries in the world, our country's representative was chosen among the top5 and that wasnt an easy journey for her. I think all of us should just congratulate and be happy for her after all, she brought fame and glory to our beloved motherland.

Maris: I honestly feel that Shamcey deserves a higher rank. The least for her should be the 1st runner-up. Her over-all performance was really good. I was shocked when she was called as 3rd runner up because I was already expecting Angola and Shamcey as the last two standing.

Farrah: I think she should have won because she really showed what a Miss Universe should embody: that is strength, beauty, grace and most of all, conviction. Even if I were in her place, I wouldn't have been able to tell the whole world of my principles and beliefs in such a way that would make me give up my love. She is a woman of substance, intelligence and beauty and I think she deserved the crown more than anyone else.

Was it the question that Shamcey lost to Angola/Ukraine? 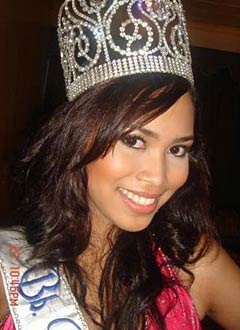 Maris: I don't think it was the q&a round that cost her the crown. In fact, she gave a very strong and straight to the point answer. I'm not really a fan of Shamcey's walk. But I think it worked for her. I believe it was the judge's call already.

Farrah: I don't think it was the question. In fact, I am still confused as to why she only got the 3rd spot when she was the only one who spoke for herself without the aid of an interpreter.

What will be your answer of the question "Would you change your religious beliefs for the one you love?"

Maris: No, religion should not get in the way when it comes to love. If a guy truly loves me, he will embrace our differences and respect what I believe in. Because after all true love encompasses everything including religion, which I believe can't be taken away from you in life and even after.

Farrah: I don't think I'll ever change my religious beliefs for the one I love because if he loves me back as much as I love him, then he'll understand. My beliefs are one of the things that made me who I am, one of the things that made him love me, and if I were to change it then I wouldn't be the same person. Most of all, God's love is greater than any earthly romance we find and I'm sure that if he really loves me, then we'll find a way to make it work without compromising both sides.

At her concert last Tuesday night, the Miss Saigon and recording star Ima Castro gave her best that the audience, composed mostly of nuns, teachers, students and alumni of Holy Spirit School Tagbilaran, once again thrilled to the Ima Castro songs. Good show, Ima Castro! Anyway, here is a letter from David Crankshaw, who's responsible of bringing Ima to Bohol, says it all:

In between performing in the show, "In The Heights" in Makati and other shows around Manila, Ms. Ima Castro came to Bohol for a concert organized by Holy Spirit School of Tagbilaran. 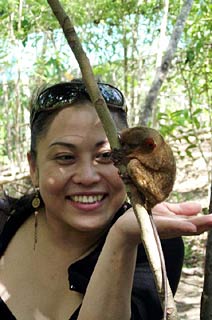 Ima's first visit to Bohol was on Sept. 12. Ima, Mollinder Cadiz (pianist), Ellawyn Cruz (road manager) and members of the organizing committee from school departed on a short sightseeing tour. Ima was amazed by the beauty of the Loboc River, Chocolate Hills and the amount and age of the churches in the area, and she fell in love with our own local celebrities, the tarsier.

On Sept. 13, Irma visited Holy Spirit School to watch the Intramurals dance performances then she treated the students and faculty to Whitney Houston's "I'm every woman."

"An evening of fine music" began with front acts of music and dance by grade and high school students and Ms Jennifer Ann Talisic (Jats) HSS Alumni. Ima came on stage around 8pm and performed various pop and musical songs from artists like Bob Dylan, Barbara Streisand and Sharon Cuneta. Followed by her very own "Shine" and other OPM songs. During the short interval the audience was entertained by pianist, Mollinder Cadiz.

The second half of the included many songs from the shows including, "I Dreamed a Dream" (Les Miserables) "It Won't Be Long Now" (In the Heights), "Easy as Life" ( Aida) and "I'd Give My Life for You" (Miss Saigon). HSS Alumni Jennifer Ann Talisic (Jats) then joined Ima on staged to sing (unrehearsed) "Tell him" by Barbara Streisand and Celine Dion.

The last song and the encore were "Listen" and "And I'm Telling You" from the musical "DreamGirls." After a standing ovation Ima spent nearly an hour talking and having photo's taken with the SSPS sisters from school and anyone else that requested.

We were all treated to an evening of powerful and emotional music, performed by an amazing, yet humble artist, Ms. Ima Castro. 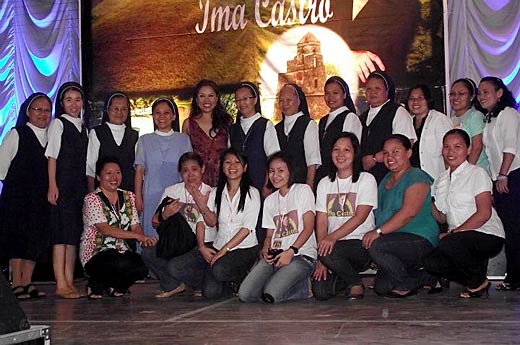 Miss Saigon and recording star Ima Castro with the sisters and working force of the Holy Spirit School-Tagbilaran... and visiting the tarsier (and other attractions) in her countryside tour.

A Hot Rod in urban slang is any vehicle that had been modified to improve its appearance or performance and often times both. 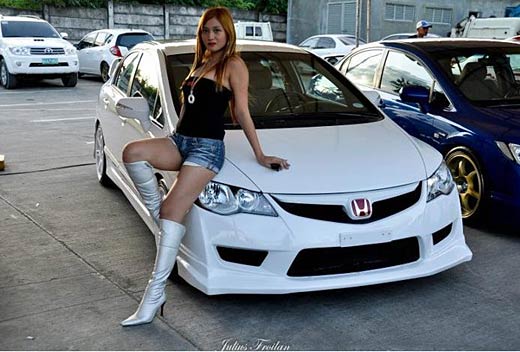 A model proudly displays a car in Bohol's First Car and Motor Show.

The visitors and on lookers had a great time with the competition photo ops with the models from Cebu and the featured cars during the event. Supportive car companies also united during the event, displaying their featured cars.  The whole time, the crowd was entertained by Bohol's bands and Cebu's DJ SEEK.

"The success of the event will hopefully inspire even more Boholanos to join and raise the level of car and motorcycle modification to a much higher level," said Karla Tirol Magno, one of the organizers.