Seen: An urban legend: The real reason why Filipino high jumper Simeon Toribio failed to clear the bar and settled for the bronze medal at the 1932 Los Angeles Olympics was because he was already feeling the call of nature but was not allowed to take a bathroom break.

Scene: The 3rd annual MG Halloween Party is on October 31, 2011, 8 p.m. at the Metro Center Hotel. Members of www.mikeygatal.com and www.boholster.com are also invited to celebrate the 41st birthday of US based Boholano socialite Mikey Gatal. "Wear your wackiest and scariest Halloween costumes, this is going to be fun ever," says Roger Gatal.

Seen: Mama Rene Salud is in Bohol. The famous designer is here for a vacation with a "friend".

Scene: The Jose Mari Chan Concert on Oct. 28 at the Panglao Island Nature Resort. The charity concert is to celebrate the 50th anniversary of Bohol's first radio, dyRD. Donations for dyRD's Inyong Alagad are now accepted during the radio program while donors will be given concert tickets.

Edward Guyano (aka Inday Charity) and I were very early in Jagna to witness the release of the hawksbill sea turtle which was treated for four months after it ingested at large amount of plastic (bags and red balloon).

"The turtle was nearly dead because the stomach is full of plastic. It was too weak. It has lung and intestinal infections as well as pneumonia," said Dr. Alessandro Ponzo, D.V.M. of Physalus. 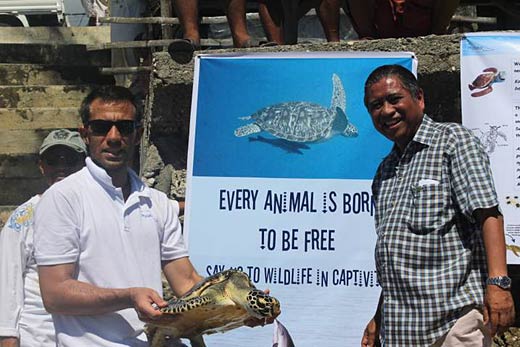 Mayor Fortunato Abrenilla (right) has witnessed the release of JT, a hawksbill sea turtle treated by the team of Dr. Alessandro Ponzo (left) of Physalus.

The turtle is now safe, to say the least. Anyway, here is a backgrounder of "JT" courtesy of Julissah C. Evangelio, MSc. Ecological Marine Management:

JT was found floating lifeless by a fisherman in the sea waters of Brgy. Can-upao, Jagna on June 18, 2011. With the help of Ms. Mytee Palo of BANGON and the Jagna MAO's, JT was handed over to Physalus and the team managed to get hold of the turtle and started the therapy as soon as possible. It was very sick, with lung infection and gastric problem and did not eat for the first few weeks to almost a month. This was due to the ingestion of plastic bags and plastic balloons found in the stool after more than 2 months. The plastic caused the obstruction of the gastrointestinal tract, preventing the animal to feed and debilitating the animal. Unfortunately some of the foods that turtles commonly eat, like jellyfish and squid, resemble the shape and colors of plastic bags and deflated balloons and they can get easily confused. That is why the ingestion of plastic is one of the major threats for most of the marine wildlife in the world.

The turtle has been treated daily with vitamins and antibiotics for the first two months by the medical team of Physalus headed by Dr. Alessandro Ponzo. In collaboration with the Bohol Rescue Unit for Marine Mammals, the Municipal Agricultural Office and the LGU of Jagna, it has been taken cared 24/7 for more than 4 months by its expert marine biologists to be able to ensure the successful rehabilitation of the animal. JT was being tube fed for 2 months and slowly fed with whole squids. After JT had fully recovered and became very active, it could consume 10-12 squids a day and gained almost 2kgs from 4.2kg since the day it was stranded to 5.75kg after 4 months.

"We will have our BYOP or Bring Your Own Bayong. We urge the people not to use plastic because it is non-biodegradable and harmful to the environment, "said Mayor Fortunato Abrenilla.

Again, thank you, Doc Ale for reminding us to take care of our marine animals. Thank you for teaching us the importance of "reduce, reuse and recycle."

(Oppss! Edward also discovered that the turtle "JT" was named after Justin Timberlake.)

And thank you, too, Prony & MariMar 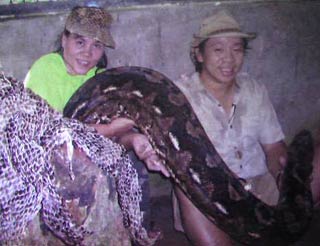 After Jagna, Edward and I were at barangay Sta. Fe, Alburquerque to attend the 15th birthday of Prony (Python reticulates), the biggest and longest python in captivity.

A visit to Bohol is not complete without Prony (and MariMar), the superstars of Albur!

After singing "happy birthday," Georgia "Jing-Jing" Salibay, the python lady gave Prony a kiss! Visitors had the chance to have photo ops with Prony inside the cage. Of course, Jing-Jing was there to assist those who have phobia.

The audience once again thrilled to MariMar's "animal show" with her deadly acrobatic movements like that of kagwang or flying lemur. MariMar was also getting the biggest applause.

The whole barangay was invited for food and fun!

The feeling of nostalgia was heightened by seeing Prony so big and healthy. I saw Prony when she was small. "Prony is a self-developed and trained Python found in the Philippines. If she is a human being, she is now a dalaga like me" said MariMar. 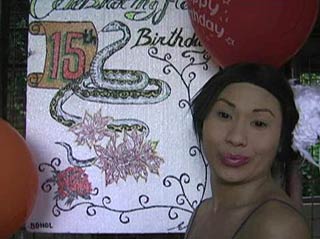 MariMar entertains the crowd in her deadly "animal show."

It was on October 21, 1996 when Prony was found by Sofronio Salibay which measured 5 feet and 5 kilograms. Now, Prony weighs 250 kilos and measures 26 feet long.

Animal and snake experts says that the growth of Prony is abnormal as pythons which live in the wild with the same sizes are already 50 years old comparing to Prony who is only 15 years old.

Prony is very choosy snake! They fed Prony live chickens before but due to her large consumption and the cost of chickens, they fed her with virgin dogs. However, the animal rights activities protested the feeding of dogs. From then on, the Salibay decided to give her two goats or one white pig, and they must be live during feeding time or Prony will just snub them. After eating, Prony can sleep for the whole month!

This article has been viewed 111 times.