Bared... All things bright and beautiful for new Anyag

Scene: Despite wishes that a female would finally be crowned "American Idol" after five years of male domination, Jessica Sanchez came in second place when Phillip Phillips was pronounced the winner. Jessica Sanchez said, "I was really fighting for the girls in this round. the only reason i wanted to win was because i want to break the whole thing with the guys winning."

Scene: Bohol's Queen of Tourism Rose Soy is the Queen of Santacruzan 2012. Santacruzan is a religious parade that re-enacts the finding of the cross of St. Helena in Cavalry 300 years after death of Jesus Christ.

This year's Santacruzan organized by the Rotary Club of Tagbilaran had military men who were assigned to hand-carry the bamboo arches decked with color-themed flowers. 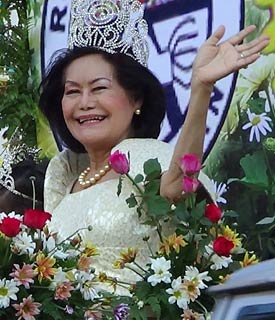 Bohol's Queen of Tourism Rose Soy is the Queen of
Santacruzan for the nth time. LPU

During the procession, there were Methuselah (the oldest person whose age is mentioned in the Hebrew Bible. He reminds people that all that glitters may end up like dust) and little angels.

Scene: Looks like love is in the air in Bohol these days. Some balikbayans who attended the recently concluded Tigum Bol-anon sa Tibuok Kalibutan (TBTK) 2012 are deciding to take the plunge and get engaged. Case in point: TBTK president Betty Veloso-Garcia's daughter, Maribeth, is now engaged to boyfriend Rob. "They have been dating for years now. They are engaged and planning a trip down the aisle. He popped the question last week at Gerarda's during the family gathering," said the high-profile VRS. "Na-kilig ang mga witness when Rob gave the engagement ring," added VRS.

Scene: The next time there is a big event in town, this special occasion designate (SOD) should know how to behave in public. Case in point: The high-ranking official (HRO) asked SOD to prepare a banquet for the many guests. After half an hour, HRO came back with the guests and to his surprise the food was all gone! "The HRO got blush because the visitors didn't eat that afternoon because HRO threw a banquet for them," said the roving VRS. "HRO found out that SOD ordered the men to clean the tables and to bring the foods, er, bring house," added VRS.

Seen: Fiel Angeli Araoarao-Gabin is spotted in LA the other day with her daughter AJ Wincielo Johanna visiting the Hollywood Walk of Fame. Fiel accompanied Cielo who is a member of the Philippine team to the International Regions Math League competition in Las Vegas, USA. Likewise, also spotted in London is Trisha Chatto.

Scene: Music-lovers filled the venue last week to watch balladeer Basil Valdez who sang those oldies but goodies from the 60s and 70s that we loved so much...beautiful memories are made of them. Yes, Basil did sing Ngayon at Kailan Man, Kastilyong Buhangin, Kung Akoy's Iiwan Mo, Siya na Ba, Nais Ko, Tuwing Umuulan at Kapiling Ka, Hindi Kita Malilimutan, et al. As I've been saying, there's nothing more relaxing and more soothing than listening to old familiar love songs that bring you back to specific periods in your past, evoking memories that you never tire of recalling and reliving. Thanks Bohol Sandugo Foundation, Inc. and K & N Productions!

She used to be just a name as far as beauty-watchers were concerned, a member of the town's Lungsuranon Performing Arts Ensemble (LUPAE), until she joined as one of the candidates of Anyag sa Tubigon 2012, the most highly produced and the most-expensive production (with an estimated budget of Php 700-800k) beauty pageant in Bohol.

Mariecris Batula Evardo has put a face to the name and what a very beautiful face it is, matched by a beautiful mind and a beautiful body. Will Mariecris the third Anyag to win Miss Bohol Sandugo in a row?

Mariecris is now carrying the customized Anyag crown donated by Manila Vice-Mayor Francisco "Isko Moreno" Domagoso. It is worth Php 60k designed by a famous Cebuano jeweler Alpio Saban, (who also designed the crown for the Queen of Cebu World).

"We want to show to other towns what honest to goodness showmanship and production is all about," said Raymond Delgado, erstwhile Tubigon's Queen of All Media.

"The program was swift and enjoyable," said Mr. Cebu 2009 Kris Nimrod Cabigas on his Facebook who hosted the event with Bb. Pilipinas- World 2006 Anna Maris Igpit. "I had a great time hosting Anyag sa Tubigon."

A few days after she was crowned at glittering ceremonies at the Tubigon Cultural Center last May 13 with Star Magic's Matteo Guidicelli and Rep. Cynthia Villar as special guests, Bared tried to pick this year's Anyag's brain by asking her some questions. 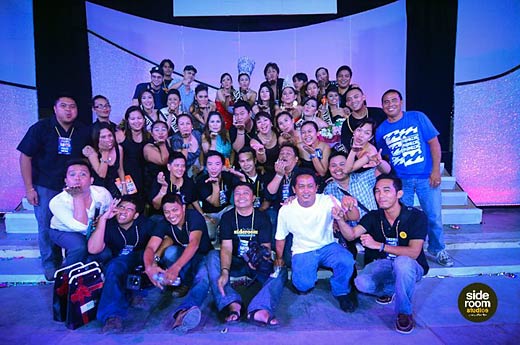 Mariecris said that she could make Tubigon a better place to live in by segregating waste, cleaning the environment and planting trees those are just simple yet smartest things in order to save our mother earth. It is one to show the best that we could in providing measures for the next generation.

What is the essence of being an Anyag sa Tubigon? "An Anyag is not just a title but being one entails a lot of responsibilities and the biggest of all is being an ambassadress of goodwill. A woman who definitely leaves a mark to everyone---a woman with dignity, pride and honor!"

Mariecris Evardo: 'There's nothing impossible for
those who never give up.' Credit: Side Room Studios

What are your winning traits?
"I think, it's all about in me with confidence, humility and faith. Of course, we should also be prepared in everything that we do."

Do you have a boyfriend?
"Yes!"

If you were to choose between your boyfriend and Anyag, which would you choose?
"I will choose them both since I have a supportive boyfriend and why should I chose one when I can have both."

As Anyag Queen, what qualities of the Tubignons youth would you highlight?
"Being hospitable, hardworking yet gentle."

What's your take on the transgender issue (should transgender be allowed to compete in beauty contests for women)?
"We know that we are all created equal and have the right to be respected but I'm against on it because beauty contest are intended for women only."

If that's the case, how would you prove that you are more female than transgender?
"I'm not just a woman in nature but the most important thing that makes me differ from them is that I see to it that I live in accordance to god's will and that's what makes me respected wherever I go."

Who is your role model and why?
"Mother Teresa. She's definitely a woman who exemplified a child like faith and matured obedience to God's will."

Young people today are liberated and adventurous, willing to try everything. What's your stand on pre-marital sex?
"As a Filipina Catholic, I still believe in the sanctity of marriage. I always value and preserve the purity of my life and my soul."

Why do you think education is important?
"Education is important because it equips us with all that we need in order to make our dreams come true, it open doors with brilliant career opportunities, it builds in every individual the confidence to face life and accept failure."

If you were somebody else, who would you like to be and why?
"I always bow down my head to the flexibility, perseverance and understanding of my father. He is my inspiration and a good example to me. He is man with essence, pride and full of love."

What are your beauty secrets?
"Enough rest, food and exercise and most of all adequate time with God."

If you were to change something in yourself, what would it be?
"I wouldn't change anything because God created me for a purpose and I'm contended for who and what I am."

Describe yourself in three words.
"Confident, bubbly and friendly."

What is your favorite quote?
"There's nothing impossible for those who never give up."

What do you find sexy in a man?
"Sense of humor."

And what turns you off?
"An irresponsible man."

This article has been viewed 137 times.