Bared... Honor thy Father and have an adrenalin rush!

Our fathers are our heroes. Let's start today's Father's Day with a little story:

A father retired after years of service and bought a brand-new car, his first ever, with the money he got from the insurance company.

One morning, he caught his little son scratching one side of the car. Furious, the father beat up both hands of the boy who ran inside the house in pain, crying.

When the father checked the damaged part, he turned pale with remorse. Scratched on it were these words: Happy Father's Day, Dad I love you!

While we are at it, here are some quotes about fathers (dad, pa, daddy, pop, popsy, tatay, amang, ama, etc.) or by fathers that are perfect for Father's Day:

One father is more than a hundred schoolmasters. - 17th century English proverb

Any man can be a father. It takes someone special to be a dad. - Unknown

A father is always making his baby into a little woman. And when she is a woman he turns her back again. - Enid Bagnold

Any man can be a father. It takes someone special to be a dad. - Anonymous

It is not flesh and blood but the heart which makes us fathers and sons. - Johann Schiller

A man knows when he is growing old because he begins to look like his father." - Gabriel García Márquez

Be kind to thy father, for when thou wert young, who loved thee so fondly as he? He caught the first accents that fell from thy tongue, and joined in thy innocent glee. - Margaret Courtney

To her the name of father was another name for love. - Fanny Fern

How true Daddy's words were when he said: "All children must look after their own upbringing." Parents can only give good advice or put them on the right paths, but the final forming of a person's character lies in their own hands. - Anne Frank

A father is a banker provided by nature. - French Proverb

"Honor your father and mother" (this is the first commandment with a promise), "that it may go well with you and that you may live long in the land." - Ephesians 6:2-3

Bells Ring Mr. King tells the story of undocumented home-health caregiver working in the US who is suffering from an acute case of homesickness. It was originally created as Bohol's sole entry to NCCA's flagship project Cinema Rehiyon (CR) 2011, a non-competition film festival that features films from the different regions of the Philippines. 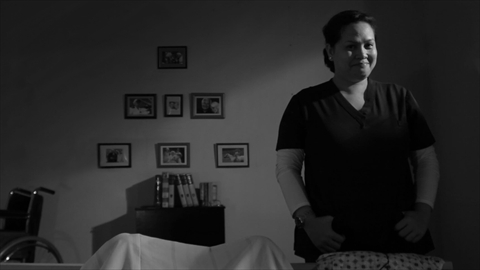 The screenplay was from Lorely Trinidad and it was based on her theater performance. It was originally developed and performed for TeAdaWorks New Works Festival, Highways Performance Space, Santa Monica, in California U.S.A.

The actor, Mitzi Ibaya, who is also into theater and literature, translated some of the lines into the Visayan dialect for added authenticity. It was her first time to perform for film.

It was shot entirely in Bohol at Ramasola Studio. The film was just shot using a DSLR as shown in the behind the scenes video available in the internet. The set production was done in one day and the shooting was done for another one day.

Since its debut in Cinema Rehiyon, it was also featured during Arts Month in the province of Bohol and also shown during Women's Month.

"Bells Ring Mr. King is the second time Bohol was represented at Cinema Rehiyon. The first time was when they included another Short I made entitled ALLAN, shown in CR 2010 at the CCP," Ted told Bared on Facebook.

At CR 2011 in Davao, one of the jurors for the Urian Awards watched it and told Ted to submit it as an entry for the Urian. "All along I thought it was being considered for last year's Urian and that it didn't make it," said Ted.

Ted left for the US last year.

"So imagine my surprise when I received a text message from the Philippines from the Urian yesterday informing me that my Film was a nominee for this year's Best Short Film Category," Ted shared.

"For me, the nomination is honor enough, even if doesn't win tonight it is enough that I know Bohol is represented and that it serve as inspiration to all aspiring film makers in the Province that they can pursue their own dreams," he concluded.

(Note: The 35h Gawad Urian was hosted by Venus Raj, Angel Aquino, Zoren Legaspi and Butch Francisco. Replays of the 35th Gawad Urian will be shown on Cinema One on June 17 at 4 p.m. and June 24 at 10 p.m.)

We were invited to cover the Bohol Wakefest 2012 at the Pandanon Island in Getafe, Bohol which started last Saturday until the 25th of June. It gives local and foreign tourists the opportunity to enjoy with one of the fastest growing sports in the world and in Asiathe wakeboarding.

Pandanon can be reached by a motorized pumpboat about 30-40 minutes from the town port. 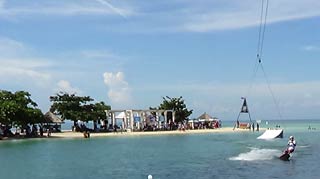 Pandanon Island is now a popular destination to experience thrill
and fun brought by wakeboarding. LPU

But first, we have Getafe Councilor Tony Ouano to thank for facilitating our Pandanon tour. You see, the influx of local and foreign tourists has grown so huge when Pandanon Island, which is also known as the "little Boracay," is a favorite summer destination.

First in Bohol and in the Visayas, wakeboarding and wakeskating are extreme surface water sports.

Wakeboarding, a water skiing-snow boarding-surfing-technique combination wherein one rides, not skis, but a single board with stationary, non-release bindings for each foot while standing sideways. It is now one of the world's fastest-growing sports and a burgeoning lifestyle for some.

Wakeskating is an adaptation of wakeboarding that employs a similar design of board manufactured from wood or fiberglass. Unlike wakeboarding, the rider is not bound to the board in any way, which gives the sport its own unique challenges. Instead, the top surface of the board is covered with grip tape, or foam.

With offering like these, Pandanon Island has to become Visayas' sports central.

After Pandanon Island, we decided to visit Catigbian for the Green Recreational Eco-Adventure Tourism (GREAT) offered at the Dagook Adventure Tourism Excitement (DATE) created during the administration of Mayor Bert Salinas. 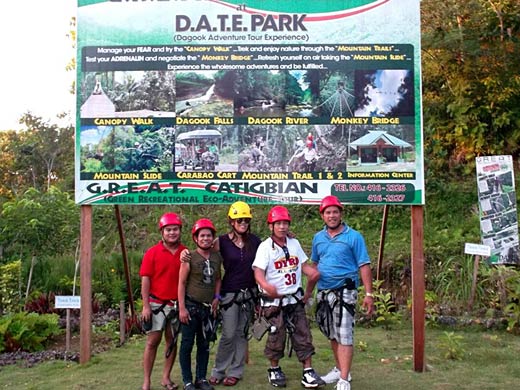 The DATE PARK is presented as another wholesome family treat for parents to introduce their kids to nature conservation and environment protection concepts.

Here, one can experience nature. The canopy walk which is the park's first outdoor like experience. From the canopy walk, one follows a trail carefully carved out from an old trail which people used to access the roaring Dagook Falls some 20 meters below. 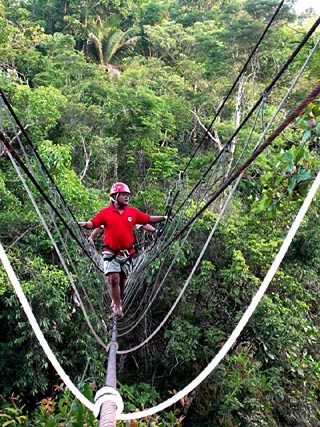 If you are not afraid of heights, the monkey bridge is the most exciting part. And oh, yes, the bridge is suspended some 30 meters where the roaring Dagook falls hurl a gurgling mass of water into the gorges below. And, boy  oh boy! What a great range of adrenalin-pumping activities it provides.

I did a brief stop in the middle of the shaking bridge to breathe in the fresh air and enjoy panoramic views on the walk.

Tours of the DATE PARK take approximately 45 minutes, are fully guided and are currently offered every hour on the hour.

The huge billboard inside the clean and well-manicured DATE PARK Information Center says: "Manage your fear and try the canopy walk, trek and enjoy nature through the mountain trails, test your adrenalin and negotiate the monkey bridge and refresh yourself on air taking the mountain slide."

Whew!!! Tiresome but uplifting. One day was just not enough for us to experience non-stop excitement and non-stop enjoyment. Whether for its specialty extreme water sports and scenic sight-seeing tours, Bohol never ceases to amaze. Oh well, there's always a next time! Soon!!!