Coastline near the proposed port in Tangnan.

For some years, the Alturas Group of Companies (AGC), owned by one of the most influential Filipino-Chinese bussiness men on Bohol, Marlito Uy, is pursuing the construction of a private port in Barangay Tangnan, Panglao, Bohol.

Recently, the AGC received Environmental Compliance Certificate (ECC), No. 07 03 05-28 0239 215 from Mr. Cunado, a senior officer of the Dept. of Environment and Natural Resources (DENR) in Cebu. An ECC is, although not a building permit in itself, an important step into obtaining such a permit.

However, the construction of a port, and its related infrastructure, at the proposed site in Tangnan is a very bad idea, for a number of important reasons.

First of all, the Island of Panglao is part of the Bohol Marine Triangle (BMT), which an environmentally critical area that includes the islands of Pamilacan, Panglao and Balicasag and surrounding waters. This area is a known as the habitat of over 150 species of reef-fishes, many of which are also economically important. The BMT is also the habitat of no less than eleven dolphin and whale species, namely Rissos dolphin, Bottlenose dolphin, Frasers dolphin, Pantropical spotted dolphin, long-snouted spinner dolphin, melon-headed whale, short-finned pilot whale, sperm whale, Brydes whale, and less frequently, Pygmy sperm whale and Blainvelles beaked whale. Besides that, the triangle includes numerous coral reefs, with their important and sensitive ecosystems. Just two years ago, to protect this important area, a project was started, which received USD 800,000 from the United Nations Development Programmes Global Environment Facility (GEF) and the Foundation for the Philippine Environment (FPE).

Constructing a commercial port in this sensitive area poses a massive threat to this unique ecosystem, which also provides a livelyhood to numerous small fishers and their families.

Second, because of its unique ecosystem, Panglao is a major tourist destination in the Philippines, attracting large numbers of domestic and foreign tourists every year. These tourist are an important source of income for Bohol, and provide jobs for many Boholano's.

Constructing a port here will dramatically reduce the attractiveness of Panglao as a tourist destination, and will directly destroy the source of income for many, and have a dramatic negative impact on the income of the Province. Very close to the proposed port site are a number of coral reefs popular with foreign scuba divers, which will certainly be destroyed.

Third, the port and related infrastructure is proposed to be constructed on Karst soil. This type of soil is very good in conducting liquids or chemicals from the topsoil to the lower layers. If there were to be a considerable amount of pollution, the karstic soil would easily funnel any contaminants down to the shoreline, and thus also add to the destruction of the delicate ecosystem.

In the direct neighbourhood are a number of caves, namely, Inubod Cave, Kalingngo-ob Cave, located in AGC property, Kang-isti Cave, and the famous Hinagdanan Cave in Bingag at less then half a kilometer from the site.

Also, the port is very likely to overuse the already strained and very limited fresh-water resources of Panglao island, which will cause hardship on local inhabitants to obtain fresh water and may cause severe salination of the soil, and thus harm agriculture.

Forth, the traffic caused by the proposed port at Tangnan will cause local roads and bridges, constructed for light traffic only, to detoriate, and will also wreck havoc on the peace and tranquility of the island. Since truck-drivers are infamous for their reckless driving habits, often under pressure from employers to deliver as quickly as possible, the number of traffic accidents and deaths will surely increase.

Besides all these objections, construction of a port at this location makes no economical sense, as a fully operational port with sufficient capacity is available in Tagbilaran city, and a number of alternatives sites can be located in the region that have considerbly less objections.

The objections were actually the reason that an earlier application for an ECC was rejected by the DENR in 2001. It is therefore puzzling to see how a new, basically unchanged, application for an ECC met approval. It is also notable that it was applied for shortly after a new officer took office in the Cebu office of DENR, and in in spite of earlier pronounced policies and clear objections from many affected groups and individuals. 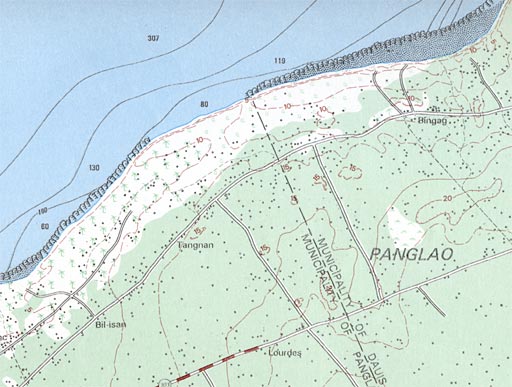 Map of the site of the proposed port in Tangnan.

More background documentation on this issue can be found here.

A wealth of information on coastal resource management can be found on the site of One Ocean, The Philippine s' Coastal Management Information Center. They have an excellent book, Bohol Island, Its Coastal Environment Profile available as a free download.

The list of opponents to the Tangnan Port includes:

What can you do?

Place your comment, name, and email address in the form under this article. This is an open forum in which you can articulate your opinion about the plans.

Many more useful addresses can be found on the site of the Ombudsman.

Two protest letters can be found here. If you decide to write a letter yourself, please also forward a copy for addition on this page.

Read all 15 comments by readers.

This article has been viewed 253 times.