True: Bol-anon flavor and other tales

Bohol to hold Cook Fest on July 19-20;
Capitol employees warn to be careful thru text 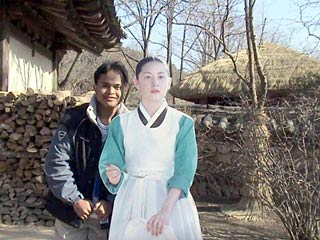 Food Festival is a tourism come-on in Korea. True was able to
participate in a food festival in winter (his travelogue was
published in This Week in Korea, an authoritative
travel newspaper in Korea.)

It's the kind of festival that should have been put up long ago. Better late than never.

I'm referring to the Cookfest as part of the Bohol Sandugo Festival. Sandugo 2007 makes a bold attempt to scour the discriminating taste of the Boholano with the search for the newest food preparation that could through the pages of cookbooks, a press release says.

I remind you that I'm not a food expert (though I'm dreaming that I was a chef in the palace in my past life), I just love to eat. Wherever am I in the world, I love to taste different cuisines with my mouth, eyes and heart.

Hinalang nga manok (spicy chicken) or nilubihang kagang (a kind of crab) would soon find its equal in the distinct palate of the Boholano.

The Cookfest which is on July 19- Cookfest for the Professional category at the Island City Mall Activity Center and on July 20- Cookfest for the Novice at the BQ Mall Activity Center will feature Boholano cooks inventing, reinventing, enhancing and garnishing locals food on the Gourmet Category. There is also an exhibit of foods by creative chefs of both foreign and local origin who have made Bohol their home and who are willing to experiment on indigenous food and convert in one which may be identify truly Boholanos. 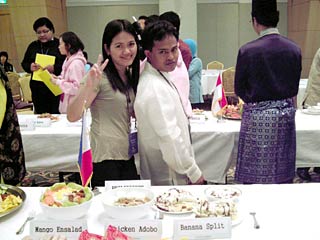 The idea is to generate recipes for a main course, salad, dessert and maybe a Boholano breakfast which can be carried in the menus of local restaurants and hotels.

Why Cookfest and why not Food Festival? The difference is the processing and the final product. Or maybe, the presentation of the festival. Cookfest is not as big as a food festival.

Bicol has Bicol express and Cebu has lechon and bakasi. Our Muslim brothers in Mindanao particularly Zamboanga City has satti. We have pansit malabon (has oysters and squid, since Malabon is a fishing center) and pansit marilao is sprinkled with rice crisps, because the town is within the Luzon rice bowl.

And how about Bohol? Enough of calamay, alope, peanut kisses, puto maya, broa, kinatloan (other provinces have their own version of our delicacies) - tourist would ask for foods, those distinctly Boholano. Many visitors were asking me in the past about the Boholano cuisine and sad to say, oh sad, I could not give them an exact answer.

So, the Cookfest must be the answer to identify the Boholano cuisine. Boholanos might have developed diverse kinds of cuisine. But is there a Boholano food culture? We have much in common with other provinces if we talk about foods.

Food festivals are now held anywhere in the world. But the most popular country to hold a food festival is Korea. It is inspired buy the success of the Korean drama Daejanggeum, or Jewel in the Palace, the popularity of Korean foods are rising in Asia. The rising popularity is also attributable to the Korean wave, Hallyo-Korean movies now sweeping Asia.

A visit to Korea would not be complete without the food festival. My visit to Korea in winter had afforded me the opportunity to participate in a food festival. Speaking of cuisine, in Korea everyone can experience dining fit for a king. You can discover the elegance of Korean royal cuisine which was enjoyed by kings in the past.

In Korea, the Food Festival is a tourism come-on. Thousands of tourists will visit Korea whenever a food festival is held in any part of South Korea. Tourists are given the chance to taste and prepare Korean cuisines.

I've read an article by Dorren Fernandez about the Food of the Philippines: Authentic Recipes from the Pearl of the Orient. It says: All, of course, came to be indigenized-Filipinized by the ingredients and by local tastes.

What really is Philippine food, then? Indigenous food from land and sea, field and forest. Also and of course: dishes and culinary procedures from China, Spain, Mexico, and the United States, and more recently from further abroad. 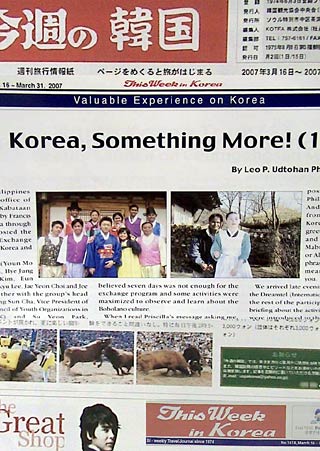 What makes them Philippine? The history and society that introduced and adapted them; the people who turned them to their tastes and accepted them into their homes and restaurants, and especially the harmonizing culture that combined them into contemporary Filipino fare.

Nowadays, people perceive food as substance to fill up their belly for a much needed energy boost. In this fast-paced, work-driven society, sine folks have no time to enjoy or savour their food. In fact, people on the run would just grab something from a convenience store and gulf the food without tasting it.

Still, there are those who crave for "lutong bahay"... food cooked with passion the way our grandma and mothers did.

From this Cookfest, Bohol can identify and develop its own unique cuisines.

You can email me at leoudtohan@yahoo.com. Or send SMS at +639212446791. Or read online at www.bohol.ph Photo caption: Food Festival is a tourism come-on in Korea. True was able to participate in a food festival in winter (his travelogue was published in This Week in Korea, an authoritative travel newspaper in Korea.