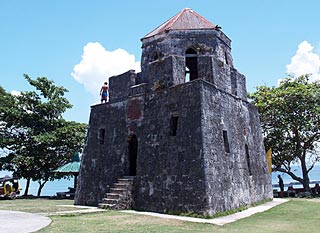 Last week, I was in Punta Cruz, Maribojoc with my aunt Sharia. Aunt Sharia told me while pointing to the watch tower "'That's the tower that appeared in the movie "Lagablab.'" So, when Aunt Sharia mentioned that the particular tower was used in the movie Lagablab, I determined to rent the 1964 Lagablab, but I am hopeless to grab a copy until now.

(As of this writing, I've been treated to the spectacle of Harry Potter and the Order of the Phoenix shattering the record for movie goers in Bohol.)

I'm not a movie buff, but I like to watch the movie for curiosity. How does the watch tower look like in the movie? And, how the Bohol scenery (famous locations are beaches in Panglao, man-made forest, Maribojoc watch tower and the Bohol's landmark, the Chocolate Hills) contributes to the beauty of the film?

There are no records available in Bohol about films/movies. I call it "silent film archive." Further research leads into "depression" when you learned that there are no photographs or video clips of the movies where our Boholanos had extra roles or cameo appearances. Henri Cartier Bresson had said, "Photographers deal in things which are continually vanishing and when they have vanished there is no contrivance on earth which can make them come back again." So, old movies are.

I might say, as of now, only few are interested to watch vintage movies though others, might say, there's no need -yet I still have to believe that "when a movie gets old, it becomes classic" in some ways.

Most young people today don't have the patience to sit through any film that doesn't explain everything in the first 10 minutes. You can have your hypothesis that many people aren't just movie illiterate. They know almost nothing about the past.

I've been told many times by movie critics and writers that movies have always been a reflection of our society, and now the majority of them appear so superficial.

Old movies helps us reminisce what it was like when we saw this or that movie when it first came out! Today seeing those vintage cars, hair, dress styles, etc. are like being in that era again.

In the United States, the Department of Communications at the University of Central Missouri in Warrensburg is offering a course called "Film Appreciation." I'm not sure if the schools in Bohol have film appreciation of "wholesome" films.

Today's kids are more technologically savvy than their seniors: Some are, but in my experience many never look at the Internet or DVD extras on a film and have no clue as to how movies are made.

It is peculiar to say that today's generations only a handful of real movie buffs. The rest are "movie fans," a different type of animal altogether. They think the latest blockbusters are great films, they want to know why movie critics are so mean and they equate quality with financial success.

People should see the difference between quality and popularity. Often the film they are most surprised by is the foreign film - they go into watching it with great apprehension but afterward the sentiment often is that the film was very good and different and that they'll seek out more in the future.

In other parts of Asia, like Korea, they are very proud of their place which is the site of some location shootings. Hallyu (the Korean wave) is the name of the phenomenon of Korean popular culture that is spreading across the world. In particular, Korean dramas and films have earned worldwide recognition for their artistic value.

A tour to Korea will be wonderful chance to visit filming locations and experience diverse aspects of Korean culture. Large billboards and other important info-campaign materials are can be found in the areas that films and TV series have their shooting locations. For picture taking and information, right? And take note, they are proud of it. 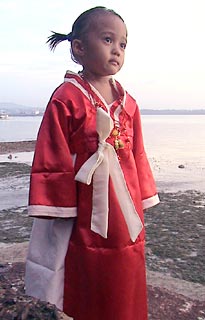 Caingget Beach in Tagbilaran City is famous
not only for koja (a delicacy) but for picture
taking like this with Celianne Janica Pesquira,
4, wearing the Korean traditional dress hanbuk.
The TV drama Winter Sonata depicts nostalgia for
a platonic love which seems to be missing in
modern life. A large billboard is placed in the
area for film location shooting.

As a tourism hub in Asia, Korean tour organizations offer Film Location Tour to those who are interested to experience the hallyu. And how about Bohol? Why not include film location tour in Bohol? Why not put billboards and other signs that "a film of _____ was shoot here in 19__?" Unless, if we are proud of.

Watching "silent movies," you soon find that you must keep all of your focus on the screen. You can find it impossible to even eat popcorn.

Meanwhile, let us refresh our minds of the films/movies and TV series done in Bohol.

Lagablab sa Maribojoc (1964). This action movie was filmed in Maribojoc and Loon town. Writer Reigh Monreal's sister Wenifreda "Uray Wennie" Monreal-Arriesgado, a widow, teacher at Cebu State College of Science and Technology in Daan Bantayan, Cebu Campus, who is now 75 years old, was an elementary pupil when she was chosen to appear in this movie. The producer Larry Jao (who had his own productions--the Sooo ckat) was from Catagbacan, Loon. Jao is related to the Uys here even to Joan Kristine Uy, the 2003 Miss Bohol International 1st RU representing Loon. Joan got three special wards and Ms. Cebu 2007. She's now a nurse and Qatar Airlines stewardess. Oscar Roncal won the Best Supporting Actor for 1965 FAMAS Award; Charito Solis won the 1964 FAMAS Best Actress and Maggie de la Riva, Best Supporting Actress.

Esteban (1973). This action movie was directed by Celso Ad. Castillo starring Fernando Poe Jr and Alona Alegre (the famous Alona Beach was named after her). According to observers, Alona was so daring when the movie was shot on Alona beach.

Aguila (1979). Directed (and screenplay) by Eddie Romero, this movie had location shooting in Tagbilaran City. The movie was about flashbacks encompass the history of the Philippines as well as the life story of the elderly Daniel Aguila (Fernando Poe, Jr.) in this three-and-a-half-hour drama. The Aguila family gathers to celebrate Daniel's 88th birthday, but the old man is nowhere to be seen - he has been missing for a decade. Suspecting that his father is in Mindanao, one of his sons (Christopher de Leon) takes off for that region in a determined search. Along the way, his memories of the nation and his father's life tell the story of eighty tumultuous years of personal and historical development. Written by Eleanor Mannikka, 1981-Best Director Eddie Romero (FAMAS), Best Screenplay Eddie Romero and Best Picture. Christopher de Leon was nominated for Best Actor. Daria Ramirez won the Gawad Urian Awards in 1981--Best Supporting Actress (Pinakamahusay na Pangalawang Aktres).

Puri (1984). This drama was topbilled by Estella Estrada II (also Stella Strada) and Dennis Roldan. It's one of those sexy flicks in the tradition of films of Pepsi, Paloma and Sarsi Emmanuel. The movie producers had some Boholanos who were extras in the movie like the teachers from the then Bohol National High School. The movie was sexy and there was nudity. When I asked those who "contributed" to the movie how dare it was, the reply was "Nude man gani sila Stella and Dennis Trillo sa Badiang Spring."

Tigershark (1987) Directed by Emmett Alston and written by Ivan Rogers and Mike Stone. This foreign filmed was done in Bohol. Mike Stone is considered one of the early legends of American Karate along with Chuck Norris, Bruce Lee, Joe Lewis and Skipper Mullins.

Muro-ami (1999). Directed by Marilou Diaz-Abaya the story was about Fredo (Cesar Montano), a fisherman who has endured more than his share of hardship in life; his wife and child both perished in a boating accident, and today Fredo approaches each trip to the sea with the angry determination of a man out for revenge. Fredo commands a crew of young people from poor families as he takes his rattletrap ship into the ocean in search of fish that live along the reefs, snaring catch with an illegal netting system. Not all of Fredo's youthful sailors are willing to put up with his abusive arrogance, however, and even his father Dado (Pen Medina) and close friend Botong (Jhong Hilario) have grown weary of Fredo's tirades. Fredo's body is beginning to betray him as well, and as he and his crew damage the sea's reef beds in search of fish, no one is certain how much longer he will be able to continue. It has 20 wins & 16 nominations. Our own Boholano actress Rebecca Lusterio (Kalbo) won as best child actress. 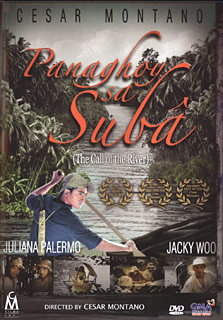 Panaghoy sa Suba (The Call of the River) (2004). It is an epic story set during the American Occupation (1942) and the Japanese Occupation (1945), shot amidst the virgin splendor of the island province of Bohol mostly along and around the Loboc River which plays a significant role in the story. It is a mixture of action, drama, romance, and history. The film is Cesar Montano's directorial debut with an almost entirely Visayan cast, and perhaps the biggest film ever to be shot in its entirety in the Visayas. The film, intended for both national and international exhibition, boldly used Visayan Cebuano as the main language. It had 16 wins and 11 nominations in FAMAS, and Star Awards including a foreign nomination. This Visayan movie depicts the scenery of Bohol. Rebecca Lusterio won the Best Supporting Actress award.

Panday (2005) starring Jericho Rosales as Tristan/Panday, Heart Evangelista as Eden Roxas and Victor Neri as Lizardo. It was directed by Retchie del Carmen and Toto Natividad.

Panday according to the staff (who have a dose of bahalina, a local fermented wine in Caingget Beach in Tagbilaran City) is projected to be a part of every Filipino's primetime viewing habits.

After the shooting, Jerico and Heart fell in love to each other in their 10-day shooting in Bohol. After all, Bohol is a temptation island.