While you and I were looking, guess who slipped into the city last Sunday without the unusual fanfare: Ricky Lo, the entertainment editor of the Philippine Star and one of the pillars of entertainment journalism, who get so enamored with Bohol. Globe-Tagbilaran manager Eden Descallar who was with Ricky boarded in a PAL flight bound for Bohol was next to him and Eden wasted no time texting me that she was sitting next to Ricky Lo. Sadly, I read her message late afternoon. Eden, who have seen stars in Rockwell and Glorietta wanted to take souvenir picture with Ricky, yet she had no courage to ask Ricky (believe me, he's really down to earth and super cool) and she just smiled.

As a stringer for the Philippine Star Entertainment, I have my articles published in his widely-read column Fanfare. I met him personally in 2005 here in Bohol.

That was Ricky's many visits to Bohol. Ricky was with Raoul Tidalgo, the editor of The Filipino Reporter based in New York City. Ricky and Raoul were warmly welcomed by the Veloso family, namely Vice Mayor Toto Veloso (whose wedding to the former Laura Butalid in 2005 was featured in the Philippine Star issue), Maam Priming, Mike and other friends. Betty Veloso-Garcia who is in New York wasn't able to come to Bohol.

What Ricky is doing here in Bohol? I don't know. But according to Vice Mayor Toto, he was here to relax. After all, his work is stressful and he deserves a break. When I texted Sir Ricky that Direk Maryo delos Reyes was in the town, too, he was in Manila already. Direk Maryo was here in Bohol with his Boholano talents including Mark Sepe and Paolo Ramirez for a picture taking. The boys have to replace the Masculado group he organized. Fashion mogul Maxi was commissioned to provide outfits for the boys.

According to Ricky, there are but a few destinations in the world that "has it all." Bohol is certainly is one of them. Eight years ago, film producer Butch Jimenez was scouting to shoot the film Muro Ami (produced by GMA Films, directed by Marilou Diaz-Abaya, wife of Boholano Leo, and starring multi-awarded actor Cesar Montano), they found themselves in Bohol. And that time, Bohol was not yet the "hottest" destination in the country sans featured on TV and in newspapers.

At present, Bohol is not just the perfect place to shoot the movie...it's a destination that can rival the best in the Asian region and maybe in the world.

"Bohol is one place not to be missed," Ricky said.

Good looks, talents and self-confidence with load of attitudes were all it took for the winners of the Mr and Ms UB Personality 2007, the highlight of the University of Bohol Days and Intramurals, held last Thursday, September 20 at the UB Quadrangle. 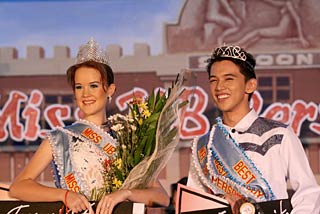 Mr and Ms. UB Personality search is considered the most popular campus pageant in Bohol - and has the best production if we would compare it with Miss Bohol Sandugo and Miss Tagbilaran. Its metamorphosis-from RPC Queen (the late Purisima Veloso-Datoy got the crown) to Miss UB Queen, and was changed into Mr and Miss UB and with the involvement of males contestants made the pageant unique.

More than a beauty contest, it is the only pageant in the country (perhaps)that required its candidates to undergo a personality text using the standardized testing tool 16 Personality Factor (16PF).

This year's search had 15 candidates; eight females and seven males. I met them during the One-on-One interview last Sept. 19 (with Fiel Angeli Gabin and Leah Tirol-Magno who replaced Sir Loy Palapos who wasn't able to come that day) to ask all sundry, not to measure how they good they are in answering questions well, but to know more about them. After all, this is not just a beauty pageant, but also a personality search.

I've learned many things from the candidates, you know, when I listened to their life stories. Others are honest to open about their families, love stories and sundry. One contestant who shared that his loneliest moment was "when I had to stop studying due to financial problem" even told me not to stop praying. He said, it pays to pray. And believe me, he speaks English fluently without any indication that he came from the town of different Boholano accent.

One female contestant shared that she broke up with his boyfriend when she learned that her boyfriend cheated her. I asked her back, what if, she would find a new love right there after the interview, which she answered, "we can't choose to love." 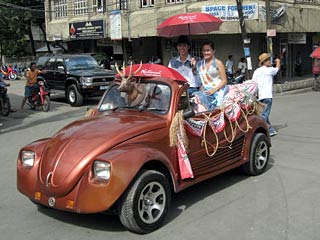 I would like to special mention Miss Criminology Mirva Polo who has the beauty...and I could not help but compare her with 2003 Miss Criminology Analyn Boniel of Bien Unido who is simple yet beautiful. She told me that she wanted to become a law enforcement officer. Mirva and Analyn reminded me of Miss World 2005 Unnur Birna Vilhjalmsdottir whom I met last year, a former police intern when she was crowned as Miss World.

Mr UB is Rolf Roland Cabrera Reyes from the College of Nursing and Ms UB is the German Anni Weissflog Wachsmuth from the Day High School department.

The evening was full of spectacular events with a magnificent production number in relation to this year's "Wild, Wild West" pageant theme. The young , gorgeous and dashing candidates were clad in cowboy and wild-western inspired outfits.

A short rain shower surprised the Evening Gown and Formal Wear Competition and the audience equally. Still the contestants professionally continued the show and sashayed on the runway. The center of the platform could be rotated showing off all angles of the candidates.

For the female category, this year's 2nd Runner-up is striking Jerranica Anna Cespon of the College of Education. She also bagged the Miss Talent Award of September 18th's Talent Night, were she showcased her voice prowess. The 1st Runner-up award went to dazzling Leslie Jane Capedoza of the College of Nursing, who was also awarded Miss Dunkin' Donuts, Miss Pepsi Max, Best in Production Number, Miss Body Beautiful, Best in Interview and Best in Gown. The prestigious Miss UB Personality crown was turned over by last year's Miss UB Personality 2006 Anne Crusit of the College of Education to the stunning German beauty Anni Wachsmuth of the Day High School Department. Anni also received the Miss Photogenic Award and Face of Exquisite Award from Exquisite Photography, the official Photographer of the pageant.

The 2nd Runner-up title for the male category went to affable Jason Caguin of the College of Engineering and Technology who also received the Mr. Friendship Award. Splendid Homer Jose Virtudazo of the Day High School Department was named 1st runner up, was also Best in Production Number and Best in Talent. The winner of the Mr. UB Personality Pageant 2007 was radiant Rolf Roland Reyes of the College of Nursing, who also received the awards for Mr. HBC, Mr. Pepso Max, Mr. Photogenic, Face of Exquisite, Mr. Body Beautiful, Best in Interview and Best in Formal Wear. 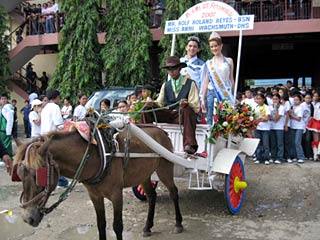 The evening was also grace by the presence of no less than the Tagbilaran City Mayor Dan N. Lim , Philanthropist Hans Schoof and Boom Boom Bautista.

The victory of this even was attributed to the joint effort of the consultants in the persons of Atty. Nuevas T. Montes as adviser, Dr. Lumin T. Pamaran for the flow of activities, Miss Luanne T. Pamaran for the dress designs, Mrs. Nomi P. Cańuto for the awards, certificates, etc., Elma A. Canuto as pageant chairperson, Jun Millar and Miss Richiel Ann Banluta as emcees, Vidal Platino as concept and dance choreography, the UB dance troupe run by Jasmine Jabonite, the UB Supreme Student Government and its president Ruth Cahulugan and the active and dedicated Committee members who worked behind the scene.

He says, she says

You can email me at leoudtohan@yahoo.com. Or you may read online at www.bohol.ph. Interact at www.tubagbohol.mikeligalig.com. Or be "in" at www.mikeygatal.com/connect. Visit the journal of the high-minded progressive Boholano, www.boholrepublic.com.