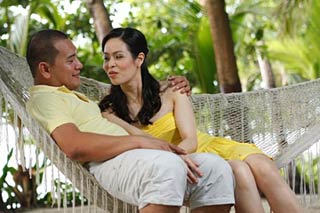 And so, after all the twists and turns and other ingredients (action, drama, romance, suspense, etc), as you and I have expected all along, ends up happily ever after in the waiting.

Atty. Doy wanted the wedding to be as private as possible. But he didn't get his wish. So last Saturday morning, June 6, when he exchanged "I dos" with Dra. Aileen at St. Joseph Cathedral, Tagbilaran City, the event couldn't be anything but gathering of friends and relatives.

Doy's parents Judge Pablo and Margie Magdoza were beaming with pride as they watched Doy take Aileen for his wife. Radiant in her Maximiel Tallo gown, all eyes were on the beautiful Dra. Aileen. 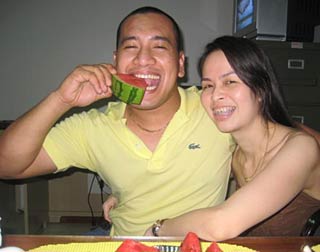 Years ago, Doy texted me if I was interested to interview Dra. Aileen who established a new derma clinic, unknowingly, he was already making "panguyab" to the lovely skin dermatologist. I had a busy schedule and there was no interview conducted.

The brand-new Mrs. Doy Magdoza was choked with emotion as she thanked everybody who attended the wedding.

Both in their early 30s and therefore ripe for marriage, the couple didn't say where they would spend their honeymoon.

Love prevails and conquers all things. 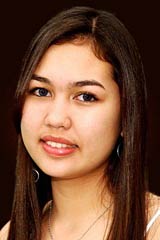 SK Jagna federated president Lalaine Tan who is a subject of controversies (the SB Jagna want to "remove" her from office because of excessive absences) is not a student of Holy Name University as reported last week. She is taking up Dentistry at Cebu Doctors University. Thanks to readers Joyce Garcia and Elizabeth Campbell for the correction.

SK provincial federated president Jane Censoria Cajes is a little "disappointed" of Jagna Councilor Senen Lloren (who said in a press release that an action from SK is a need on Tan's case and the negative comments on the SK Bohol Youth Congress 2009 as commented by Tan's SK members). "Thanks for the feedback. But how can we give action when there is no formal letter complaint given to the office?" Jane Censoria wondered.

In behalf of the 6th Sangguniang Bayan, we would like to clarify some issues on the column "BARED" by Mr. Leo P. Udtohan on June 7, 2009 page 8 of Bohol Chronicle about his comment specifically my name and Vice Mayor Pagar.

Personally, I have already a sad experiences with this particular writer much I consider him not an asset but a liability to your newspaper which will eventually you will lost a lot of prospective readers and clients.

Firstly, the complaint filed by the Sanggunian to Ombudsman Visayas against our SK Federated President Ms. Lalaine Tan is not done by only few SB Members but the consensus majority members of the Sanggunian. But before we moved to the Ombudsman we take steps to exhaust everything by providing Ms. Tan the necessary guidance and advices.

She reiterated in her privilege speech to acknowledge her lapses and appeal with us to help and guide her again because she promised to change but the next session she is absent again and successively absent again for she was not able to wake up early after attending a party the night before the session day.

We directly filed the complaint to the Ombudsman because we do not want Ms. Tan to be just suspended by virtue of the SK Constitution and by Laws, there is a need to replace her because she already violated the Local Government Code by incurring huge numbers of absences in the Sanggunian and in the barangay level which is more than enough stated in the Local Gov't Code.

We don't really care if she is pregnant or not that is her personal choice in life but what is important to us is is only one thing – to protect the interest of the municipality and the Sangguniang Kabataan. We do not want the youth to be misrepresented or underrepresented and be left out. We cared for them to get involved and come up strong ideals and be able partner of progress in the municipality. She should not regret to what happened because we gave her enough time for proper guidance and advices but all she cares is she never fails to collect her emoluments and other benefits as ex-officio member of the Sanggunian.

Her gross inefficiency and lack of interest to serve her constituents in the SB and in the Barangay Council and the habitual neglect or gross indifference to duty provide us with no choice and we cannot let it go any further. ENOUGH IS ENOUGH but to act properly even if it is painful for us to go against one of us in the Sanggunian.

Most of all, public service, cannot be held hostage to the whims and caprices of Ms. Lalaine Tan. The act of the Jagna 6th Sangguniang Bayan is simply to give a matured precedents to other LGU who has been experiencing the same fate with their SK President.

Attached in this email of ours is the covering letter addressed to Hon. Pelagio Apostol of the Ombudsman Visayas and the SB Resolution regarding the Official Actuation of Ms. Lalaine Tan.