And it came to pass that while all of us had our eyes and ears glued to the wide-screen waiting to see her again, Miss Bohol International 2006 Loida Tiza Lagonoy (who represented University of Bohol) made the most unexpected "shocking" and "awful" revelation of all time in the history of beauty pageantry in the province of Bohol during the Miss Bohol International 2009 coronation night held on July 24 at the Holy Name University gym. 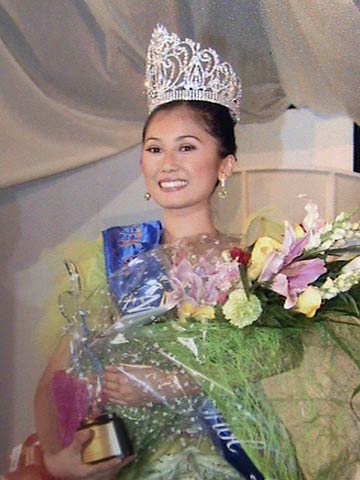 Miss Bohol Sandugo 2006 Loida Tisa Lagonoy made a "shocking" revelation that she is "deprived" of many things (and rights) as a beauty queen including her round trip ticket prize going to the USA.

Loida "accused" the organizers that her round trip ticket prize going to the US in 2006 was not given to her and she was not accorded the treatment that befitted a queen. She created mixed of emotions—surprising everyone — when she said that her "reign was a reign that never was."

"My reign was the reign that never was. I have not been involved in any activity that I could serve the purpose of my title well," she said.

Loida said she was more than willing to assume the role that should been designed for her but it was never materialized.

"I was not able to travel because I didn't receive any roundtrip ticket which is supposedly one of my major prizes. I had to sweat my way out to claim such an elusive prize which I believed should not reached such a stressful point it had only been effectively facilitated," she further said.

She also said that she handled the whole affair with dignity, grace and pose.

Loida wants to be remembered as a Miss Bohol International "a person who sincerely expressed her gratitude to the people who helped her… somehow who is giving back to the community her own caring ways, and somehow who remains true and honest in all her dealings with people and around her."

The irony was while the speech was played, she was smiling and waving to all as if she was mocking them. Her bravura act eclipsed and outshone the crowning of the new queens (the Miss Bohol International 2009 is Carlene Yap representing the Philippine Nurses Association-Bohol chapter). 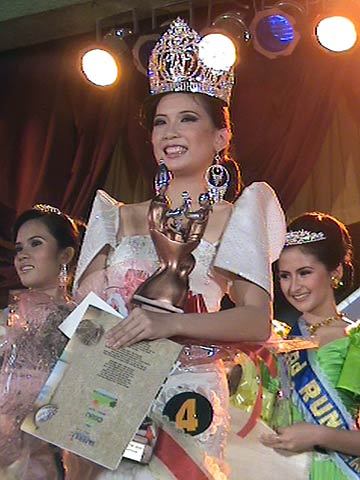 "I was being honest. If I didn't do it, I will regret for the rest of my life," she said.

In the production number, Loida appeared in "Nobody's dance" together with the dancers but she wasn't acknowledged. "So, we didn't know it was her," said one watcher.

According to "beauty experts" who were at the pageant night, "we admire her guts and for saying it as it was."

According to VRS, Loida wasn't in a hurry to get her visa when she won because she was still a 3rd year college student taking up Nursing at the University of Bohol. "Wala siya magdali (she's not in a hurry) because she know she has 2 years," VRS said.

The ticket issue mounted weeks ago and we're thinking there was amicable settlement. In a talk with Ate Vi weeks ago, Loida was not given the round trip tickets because she didn't claim it during her reign. However, Loida said, "I understand there was 1 year claimability and 1 year validity ticket going to LA, USA I was third year when I won. If graduate ko sakto akong calculation that it was time to go to the USA."

After the revelation, Loida is being asked everywhere she goes. "God knows what's best for me and I need to fight for my right."

Here are some interesting sidelights to this year's Miss Bohol International: 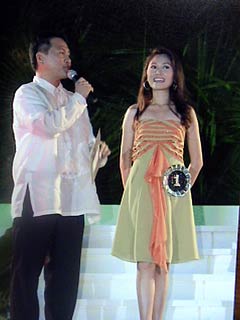 Seasoned host Raul Gatal interviewed Loida
Lagonoy in 2006. Raul knows how to enliven the
crowd unlike this year's search.

Just like the first three editions, it started an hour late. Its saving graces were the fast-pacing of the show and the good batch of candidates.

The candidates were sexy in their production number. Carlene Yap who was darling of the press stood elegantly. Jagna's bet Idy Caseńas Cagas was an early favorite but she wasn't able to make it to the top 5.

Guldameer Sombrio who represented SK was proclaimed 4th runner-up. The SK family were all there to support her quest.

Mestiza beauties who joined this year's aren't "mabenta" to the judges.

The host, Roy Ecleo of ABS-CBN Cebu, though look gorgeous wasn't able to enliven the crowd. With his limited communication skills with the candidates and the crowd, the show was a bit boring. He made the pageant his concert night.

For the pageant that boasted of international caliber, the production values were disappointing to say the least.

What Chatto and Cajes will wear at Sona?

Trinidad Mayor Judith del Rosario-Cajes will wear a terno made from raffia (from Inabanga) exclusively designed for her by Charloe Arbasto. The gown is hand-painted. Carloe also designed the Barong Tagalog of Rep. Cajes made of raffia.