"Don't Cry for me Argentina" is one of my personal favorite among my songs. It brings back history about the life of Eva Peron in Argentina.

It was in 1996 when the movie Evita topbilled by singer Madonna became a hit that my high school friends liked to sing it (and another soundtrack of the movie, You Must Love Me). That song was being played in radio stations by a neighbor back in good old Booy, Tagbilaran City.

When Bared chanced upon historian Marianito Jose Luspo last week, while he was preparing a script for a documentary he's writing, he told of a possibility that Holy Name University will produce "Evita," the musical. Why not? Last year, the school successfully produced their own The Phantom of the Opera spearheaded by Ramon Boloron and Luspo, while Tor Telin provided the script adaptation and some aspects of technical direction.

And who will play Evita?

Jesat Cathy Duce will play the role of the former first lady of Argentina with taut and controlled passion. Jesat's enormous presence on stage will create the dichotomy of a crushable creature who at the same time is capable of crushing world leaders.

Jesat is no stranger to the big stage; she has played roles in musical shows, performed in big events and won singings contests like the Sangguniang Kabataan (SK) Pop Idol 2006. 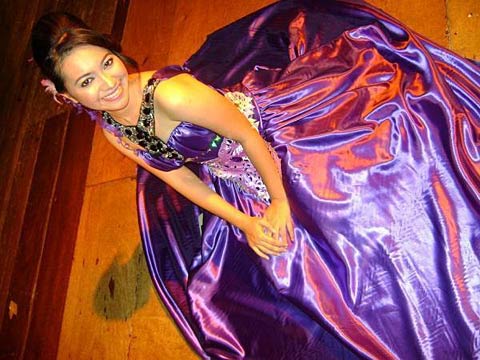 Jesat Cathy Duce will play Evita in a musical show at the Holy Name University in October.

The musical will be staged this October during the English Days to be spearheaded by the Languages Department of the College of Arts and Sciences headed by Boloron. Luspo will co-write the script.

Evita is the story of Eva Peron, the second and most famous wife of the Argentine dictator Juan Peron. She was born Maria Eva Duarte on 17 May 1919 in Los Toldos, a village 150 miles west of Buenos Aires. She was youngest of five illegitimate children. Her childhood was unremarkable, her family ordinary. She died Eva Maria Duarte de Peron, the First lady of Argentina, on 26 July 1952. She had become the most powerful and famous woman Latin America had ever seen and she was mourned by millions - she won international acclaim and adoration from her own people as a champion of the poor, whilst glamour, power and greed made her the world's first major political celebrity. 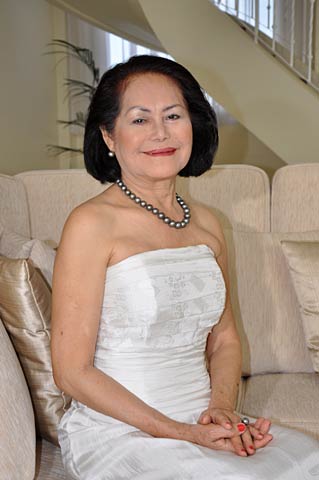 We all know Dame Rosario "Rose" Soy, the socio-civic leader and philanthropist Mrs. Bohol International 2009, aren't we? Here's more of Rose written by entertainment columnist and host Ricky Lo in his column Funfare published in The Philippine Star on September 17, 2009:

As I've been saying, the Bohol government should give FPJ a posthumous citation for putting the province in the tourism map. In fact, every other province in the country should do the same. FPJ set almost all his films in the country's scenic spots, one of them the Chocolate Hills and the province's other attractions that have become a must-see for tourists. FPJ shot Esteban in Bohol, with Alona Alegre as one of his leading ladies. A beach in Bohol was named after Alona who stayed there long before the place grew to be a resort (where the cast and crew of Regal Films' Nandito Ako, Nagmamahal Sa'Yo, starring Aljur Abrenica and Kris Bernal, directed by Maryo J. delos Reyes stayed).

Also deserving a similar honor is Rosario "Rose" Soy who was chosen Mrs. Bohol International 2009 in last July's TBTK (Tigum Bol-anon Sa Tibuok Kalibutan, headed by New York-based nurse Betty Veloso-Garcia) week-long celebration. Rose is known as Queen of Rotary Club for four consecutive years (since 2006) for her fundraising projects not only for the club but for the whole province.

Long before saw any glimmer of possibility of Bohol becoming a tourist haven, Rose Soy was already in the forefront of the province's inchoate tourism in the 1960s.

According to my Boholano friends Raoul Tidalgo and Leo Udtohan, back in the days when going to the Chocolate Hills meant a back-breaking two-hour drive over rough and dusty roads, only Rose saw the hills' potentials as the crown jewel of Bohol's many marvels of nature. That vision spurred Rose to bid to operate and develop Chocolate Hills and through her own Bohol Travel and Tours, succeeded in bringing the hills to its full tourism potential.

Rose spearheaded the development of what was to have been Bohol's first resort hotel complex in the mid-'60s. Sadly, due to unforeseen setbacks, the project failed to take off. Rose, however, soldiered on, resolute in putting Bohol on the world's tourism map.

Rose's effort paid off. She witnessed the dawn of Bohol tourism and helped shape it into what it is today.

Raoul said that today, Rose is gloriously retired but far from being uncommitted.

Added Leo, "This glamorous grandmother is a vigorous as ever, with memberships in the Rotary Club of Tagbilaran and Lions Club of Tagbilaran, The Bohol Chamber of Commerce, aside from managing various business, participating in community project and yes, ballroom dancing at which she is a whiz at the Argentine tango."

These days, Rose holds court at her Cion-Virge Restaurant at the Tagbilaran Airport Compound. From her office window, Rose sees the endless stream of tourists flying in from all parts of the world daily. She admits the sight warms her heart no end.