Dear Lord, we fervently pray for your intercession so that our nation will be spared from another threatening typhoon. Our suffering people have not recovered from Ondoy's wrath. Please prevent Pepeng from hitting any of our islands. Save us from further calamities by embracing our country with your protective grace and merciful blessings. Amen.

I got that text message from my friends in Manila asking for prayers (who were panic buying the other day—buying goods in bulk, depleting inventories of supermarkets) when Pepeng's fury is in Manila.

While I write this piece, we all still can't believe how and why this happened. And I couldn't help but wonder which was worse - Ondoy's deluge or the typhoon Milenyo in 2006?

I was in Manila when typhoon Milenyo hit the country on Sept. 28, 2006. Madame Nila Montero, Maricor Igpit and I were scheduled to leave for Europe to attend the Miss World 2006 to support Anna Maris Igpit, the country's official candidate. While going to the Ninoy Aquino International Airport, I saw scores of people, displaced from their shanties under a bridge, shivering in the rain on the streets atop whatever scant personal effects they could retrieve. Schools were inundated and damaged. Most of the local flights were cancelled. While the Manila skies were still dark, I worried so much leaving the country in desperate state. Inside Lufthansa, images of the victims, houses that were collapsed or washed away were still on my mind and I just prayed silently that everything would be fine.

Now, close to 300 had been confirmed dead in the wake of Ondoy. The northern part of the country is currently being battered by another typhoon, "Pepeng" (international code name: Parma), which came a week after Ondoy left.

Despite the nightmare the nation's capital experienced, a ray of hope exposed itself, as selflessness reigned amid the disaster. Stories of heroism abounded in the wake of the epic floods. Indeed, the worst of times does bring out the best in everyone.

Here in Bohol, station dyRD and The Bohol Chronicle held its own relief center by accepting donations and pledges for the victims. Those who wish to help; you can donate food and used clothing, which will be transported to Manila for the victims. Just visit the office or you may call (+6338) 411-3100/411-3400.

In response to the recent calamity brought about by typhoon Ondoy, The Peacock Garden Luxury Resort and Spa and the Schoof Family have been doing relief operations for flood victims. Donations for the victims of typhoon Ondoy organized by the Peacock Garden (Katrina Schoof and Wowing Virtucio) may drop donations at the resort, Dunkin Donuts CPG or ICM. All money proceeds will be converted into goods. For inquiries, please call (+639)17-3269000/09174020505 and (+6338)5399231.

"We've been getting positive feedbacks so far, very touched with the many generous people who shared their blessings to us," Katrina Schoof said.

Runway Icons, a talent and fashion division of Minds Unlimited, events, casting handling, event concepts specialist and the premier talent handler of the province and now a member of Fabric Fashion Philippines based in Manila, also joined to help our fellows. The models through their Runway Icons Relief Center the Bohol Quality Mall at the Atrium Circle asked donations from the people of Tagbilaran City to help the victims.

"We sent 8 boxes of unused clothes and goods to the victims of typhoon Ondoy. It's tiring but happy because we gave attention to all the people and ask them to spare something for the victims. Thank you so much," said Kenneth Mizken Tirol Andan-Gonzales.

Social networking sites have been working overtime, as Netizens urged their friends and family to help in the rescue and relief efforts. Concerned citizens from all over the world encouraged others to donate whatever they can to help those who lost everything in the floods.

I know it's difficult for us to accept this most recent tragedy, especially for those who lost loved ones. Time heals. One thing is certain: We can't question the will of God. 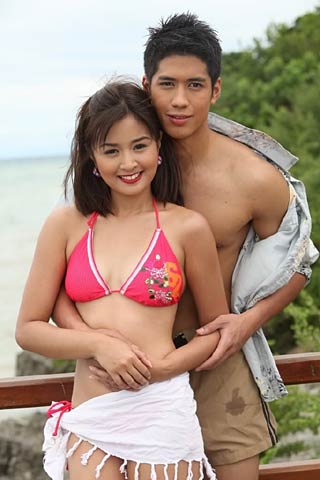 As I've been saying, Direk Maryo delos Reyes is a topnotch Ambassador of Bohol for promoting and putting the province in the tourism map. In fact, Direk Maryo's Nandito Ako, Nagmamahal Sa'yo (under Regal Fims), starring Aljur Abrenica and Kris Bernal, was shot in Bohol's scenic spots, one of them the Chocolate Hills, Bohol's tourism signature.

In July, while the cast and crew were busy filming, there was Gerwin Yudelmo who witnessed how the movie was done. I asked Gerwin, a young leader (2nd placer of the Most Outstanding SK Chairman of Bohol Year 2, and he's vying for the SK's national award for Outstanding Sangguniang Kabataan Awards and Recognition or Oskar this month), and for sure, a fan of Aljur Abrenica to cover the shooting (and incidentally to find a "scoop").

Gerwin went to Alona Beach where the cast and crew were billeted. He even accompanied the cast and crew at the Riverside in Dauis. He admitted that he was excited to see Aljur who has a boyish appeal, "papable" according to Gerwin. It was not exactly a case of love at first sight. But, he said, he was immediately attracted to Aljur when he first saw him on television. He did not get to see Aljur in person at that time.

The two met when Aljur took respite from the scene. It started with "hi" and "hello" and Gerwin wished to die the very moment Aljur took his hands while they were talking. Aljur took Gerwin to the gazebo at the residence of Dr. Melinda Regner Borja. Those who had witnessed how the two were talking would imagine that it was another "scene" from the movie. But no, it was our own Gerwin and Aljur talking privately.

That incident which is still fresh in the mind of Gerwin (and the "kilig" continues) since Nandito Ako, Nagmamahal Sa 'yo is currently showing at the Island City Mall since Sept. 30. 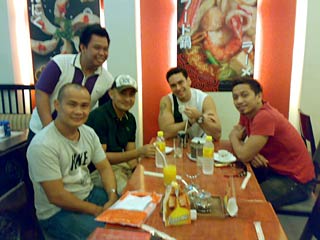 Gerwin Yudelmo (standing) beside Carlos Morales,
Jhong Helario of Street boys, Romel Montano and Onyok
Velsaco at the RaiRaiKen-Island City Mall Branch
yesterday who witnessed how the movie was done in Bohol.

Nandito Ako starts with Aljur and his mother Anna Capri eking out a living in Quiapo. Aljur plays a poor boy from Manila whose mom, Anna Capri, earns a living by selling medicinal herbs in Quiapo Church. Anna crosses a syndicate boss in Quiapo, so they go hiding in Bohol, where Anna reveals that Aljur's biological father lives, Lloyd Samartino, who won't believe that Aljur is really his son. They have a DNA test and it's established that Lloyd is really Aljur's father.

While in Bohol, Aljur meets a pretty girl who's a balikbayan from the States, Kris. He falls for her and she's also attracted to him, but the problem is Kris is already engaged to be married to Baron Geisler who she met in the US. To make things more complicated, Baron is also the son of Lloyd, so he and Aljur are half brothers.

It's a beautiful story that is not only about the love affair of Aljur and Kris but also about intricate family relationships, says Direk Maryo.

Why did he choose to film the movie on location in Bohol? "Bohol is a perfect place for the movie," he told Bared in July. 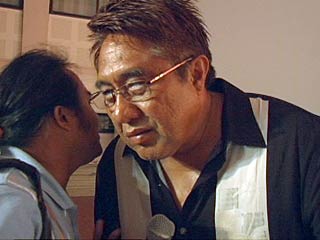 In a press conference, Direk Maryo said, "First, for the sake of expediency. Aljur and Kris have so many commitments here in Manila and each time may shooting, mahirap sila ipatawag. So we stayed in Bohol for about two weeks para madali silang tawagin each time may shooting. There's also no red tape as the Bohol provincial officials were very cooperative and we can shoot anywhere easily. Tuloy-tuloy ang trabaho namin and we were able to finish the film right on schedule. Also, I'm from Bohol and I want to showcase the beauty of my home province. We feature in Nandito Ako all the beautiful spots in Bohol like Panglao Beach, Hinagdanan Cave, the Loboc River Cruise, the historic Baclayon Church, Maribojoc Mangrove Farm, the Tarsier Sanctuary, and of course, the fabulous Chocolate Hills. We also employed Boholanos to be part of the cast and the staff. Lutgardo Labad, a Boholano, is our musical scorer and we also used the world renowned Loboc [Children's] Choir in the movie."

Nandito Ako gives a great boost to Bohol's tourism as it shows all the beautiful spots — with great emphasis on the Chocolate Hills. It also features our fellow Boholanos in cameo roles.