Bared... Health tips and other items for Year of the Tiger

The nationwide search for the 4th Gawad Haydee Yorac is now open for nominations. The award is established in honor of the late Haydee Yorac whose attributes, personal work ethics and commitments, and service to the nation are basis of this distinction. 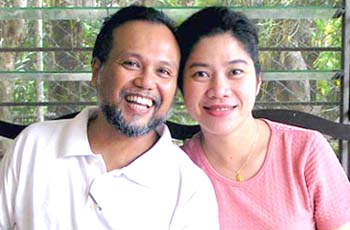 Heroes are all around us.
Dr. Christopher C. Bernido and Dr. Ma. Victoria Carpio-Bernido
are the 3rd Gawad Yorac awardees.

A physicist-research-educator couple from Jagna, Bohol, Dr. Christopher C. Bernido and Dr. Ma. Victoria Carpio-Bernido president and principal, respectively, of the Research Center for Theoretical Physics in Bohol, have been named the third Gawad Yorac awardees.

Their partnership to build a stronger nation through science, research and a new method of teaching founded on excellence and values won the judges' approval over nominations received from different parts of the country.

The nomination is open to Filipino citizens residing in the Philippines who are at least 40 years old at the time of nomination. He/she must have distinguished himself/herself in serving a wide public in the country, exhibiting courage and integrity in the face of overwhelming challenges.

The award shall be conferred annually on March 4, Yorac's birthday. The winner will receive a trophy by National Artist Napoleon Abueva and a cash gift of P500,000, net of tax.

It's the third day of 2010. Let's welcome the Year of the Tiger with the following "tips" from Mikey Gatal (who owns the www.mikeygatal.com), who wants to share with his fellow loyal Bared followers:

The Senility Prayer: Grant me the senility to forget the people I never liked anyway, the good fortune to run into the ones I do, and the eyesight to tell the difference.

Here are health tips for the New Year from health-conscious Auring Balili (of New York, USA) she read from Self website.

Combat fat! Your allies in battling bulge? Foods that do the work for you. These edibles have proven lipid-melting powers that help you slim. That's a win.

Almonds - Almond joy! Dieters who ate 3 ounces of these nuts every day reduced their weight and body-mass index by a solid 18 percent compared with an 11 percent drop in the no-nut group, a study in the International Journal of Obesity found. Almonds are high in alpha-linolenic acid, which can speed the metabolism of fats. Stick to 12 per serving.

Berries - Vitamin C–loaded fruit such as strawberries and raspberries can help you sizzle up to 30 percent more fat during exercise, suggests research from Arizona State University at Mesa. Blend a vinaigrette of 1 cup berries and 1/4 cup balsamic vinegar.

Cinnamon - This spice could make your waistline nice. Sprinkling 1/4 teaspoon on your food may prevent a postmeal insulin spike-this increase normally occurs after you eat and "signals the body that it should store fat rather than burn it," explains Lauren Slayton, R.D., of New York City. Add a dash to your oatmeal, yogurt or coffee.

Mustard - Hello, yellow. The spice that gives mustard its color, turmeric, may slow the growth of fat tissues, a study in the journal Endocrinology notes. Eighty-six mayo in favor of any mustard; sprinkle turmeric on cauliflower and roast for a tangy side.

Oranges - Prevent pound creep with this citrus star: It contains fat-torching compounds called flavones. Women who ate the most flavones had a significantly lower increase in body fat over a 14-year period, a study in the American Journal of Clinical Nutrition finds. Snack on slices or drink freshly squeezed OJ (with pulp!) for the biggest payback.

Soybeans - These green gems are rich in choline, a compound that blocks fat absorption and breaks down fatty deposits. Add 1/2 cup edamame to a salad. 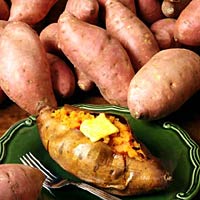 Sweet potatoes - Trade up to sweet taters. They're high in fiber, which means no drastic insulin jumps and thus less fat packed onto your hips. Bake a small sweet potato-think of two bars of soap as a portion size-and top with a dollop of lowfat or nonfat cottage cheese. (Joven Menorias, a Capitol employee reveals that sweet potato helps him maintain a petite body. Ang kamote, bow!-LPU) Swiss cheese - Holy cow: "Calcium-rich foods reduce fat-producing enzymes and increase fat breakdown," says Michael B. Zemel, Ph.D., director of the Nutrition Institute at the University of Tennessee at Knoxville. Put toe to toe with some of its cheesy counterparts, Swiss is a heavy hitter in the calcium department; layer a slice on a lunchtime sandwich, or stack some on high-fiber crackers.

It's time for a new slim-down mantra: Eat more to weigh less. No joke! The right foods help you drop pounds by revving your calorie burn and curbing cravings. We consulted top experts for the best picks and asked leading chefs for easy, tasty ways to prepare them. Add these eats to your plate today and you'll be slimmer and healthier in no time!

Steak - Beef has a rep as a diet buster, but eating it may help you peel off pounds. In a study published in The American Journal of Clinical Nutrition, women on a diet that included red meat lost more weight than those eating equal calories but little beef. "The protein in steak helps you retain muscle mass during weight loss," says study author Manny Noakes, Ph.D. Try to consume local organic beef; it's healthier for you and the environment. Eat more Grill or broil a 4-ounce serving of top round or sirloin; slice thinly to top a salad, or mix with veggies for fajitas.

Eggs - Dig in to eggs, yolks and all: They won't harm your heart, but they can help you trim inches. Women on a low-calorie diet who ate an egg with toast and jelly each morning lost twice as many pounds as those who had a bagel breakfast with the same number of calories but no eggs, a study from Louisiana State University in Baton Rouge reports. "Egg protein is filling, so you eat less later in the day," says David Grotto, R.D., author of 101 Foods That Could Save Your Life (Bantam). Eat more Omelets and scrambles are obvious choices, but if you can't cook before work, bake a frittata on Sunday; chill it and nuke slices for up to a week. An easy recipe: Vegetable Frittata.

Kale - Long sidelined as a lowly garnish, this green belongs center stage on your plate. One raw chopped cup contains 34 calories and about 1.3 grams of fiber, as well as a hearty helping of iron and calcium. But kale's earthy flavor might take some getting used to. Spinach, another nutrient powerhouse, is a milder-tasting option. Eat more Mix chopped raw kale into cooked black beans, says Jennifer Iserloh, founder of Skinny Chef Culinary Ventures, in New York City. Or slice kale into thin strips, sauté it with vegetable broth and top with orange slices. Make it a meal by tossing the mix with quinoa.

Oats- "Oatmeal has the highest satiety ranking of any food," Grotto says. "Unlike many other carbohydrates, oats-even the instant kind-digest slowly, so they have little impact on your blood sugar." All oats are healthful, but the steel-cut and rolled varieties (which are minimally processed) have up to 5 grams of fiber per serving, making them the most filling choice. Instant oats contain 3 to 4 grams per serving. Eat more "Instead of using breadcrumbs, add oats to meat loaf-about 1 cup for a recipe that serves eight," Iserloh recommends. Or try her recipe for turkey and oatmeal meatballs.

Year of the Tiger

Astrologers said the Metal element gives the Tiger its sharpness in action and speed of thought.

Tigers born in the Metal year like to stand out in a crowd. With an inspiring assertiveness and competitive demeanor, they determine their goals and then do anything necessary to achieve them.

The Tiger can be known to jump to conclusions or to act too quickly without weighing the options or understanding the consequences. This is a flaw Tigers must learn to curb.

The Tiger is the third sign in the cycle of Chinese Zodiac, which consists of 12 animal signs.

It is a sign of courage. This fearless and fiery fighter is revered by the ancient Chinese as the sign that wards off the three main disasters of a household: fire, thieves and ghosts.

People born in the Year of the Tiger are generally well liked because of their charming personalities. Often, failing at a given task or being unproductive in his personal or professional life can cause a Tiger to experience a deep depression. Criticism from loved ones can also generate this type of Tiger reaction.

Tigers are fond of competitions. They simply cannot pass up a challenge. They may appear cool and are unpredictable, and it would be unwise to underestimate their reactions.

Natural leaders, they have a strong sense of their own dignity. They are intelligent, alert, and farsighted.

Good strategists and tacticians, they often have a hidden agenda. As long as they do not risk their luck too often, and keep their restless nature under control, they will enjoy success and happiness.