Bared... Win some, lose some 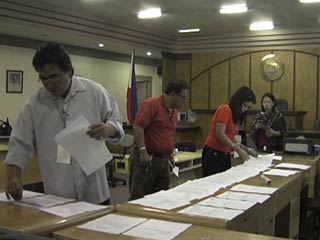 The provincial board of canvassers (PBOC) headed by Atty. Eliseo
Labaria don't get enough sleep 24/7 during election time.

In Bohol, the elections are over and the winners were already proclaimed in the country's first automated elections. And the best thing, the provincial board of canvassers (PBOC) headed by lawyer Eliseo Labaria, provincial fiscal Macario Delusa, Dr. Lorna Rances, Amy Cortidor, Lourdes Balbin, Juvenal Beniga, Priming Ontong, Tacks Socorin, Nieva Uy, Prima Soliva, Lilet Tindoy, Edward Inting and Malou Cempron (who were getting five hours of sleep during election time) can have a good night sleep. I've heard that my good friends Maam Priming and Ms. Malou will have (beauty) rest and rejuvenation this week as they have now the luxury of time. 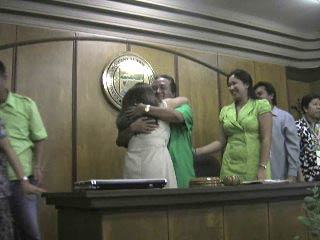 Newly-elected Governor Edgar Chatto hugs his wife Pureza while
their daughter Trisha looks on smiling at the proclamation.

My media colleague Edward Guyano and I could give a sigh of relief as we spent our time covering the elections. We even woke up early to report the arrival of the precinct count optical scan (PCOS) machines and accompanied the Argo forwarder and the Philippine Army officers for the distribution of PCOS to Bohol towns. We also took part on testing the credibility of the PCOS machines in mock elections. 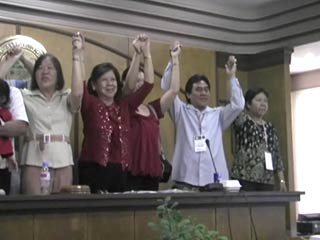 Concepcion Lim is the first woman vice-governor of Bohol.

After the election mudslinging, is it all's well that ends well? In an interview, Chatto assured, "When it comes to development of Bohol, the bottom line is always a common dream to have a sustainable development in this province. We can work very well together." 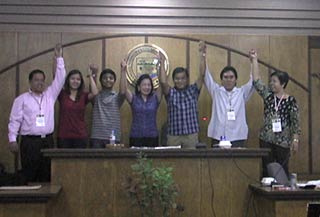 Chatto further said, "I am looking forward to working with the elected officials. Now, the whole electoral process is over regardless of political color all of us must make sure that we are able to harmonize ourselves and find the common objective and common target for the province of Bohol."

Regardless they came from different political spectrum since the political season is over, it is important to extend hands of friendship to everyone… and back to work as soon as they are installed in their respective offices.

And many breathed a sigh of relief. We are expecting our newly-elected officials to usher in a season of change... and hope for better days.

Let's do a recap and see how those who ran are faring:

Asked to give a one-word description of the country's firs automated elections, the Comelec personnel smiled.

The teachers and policemen who took part in the elections can be happy as their honoraria are on the way to their bank accounts. Nang Besing Rulona, administrative aide of the office of the vice governor has the widest smile since she's a great help. She was the San Pedro at the SP Session Hall. She got a thumbs up from everyone present. Make it double thumbs up for the effort. Hehehehehe!