Dame Rosario "Rose" Soy was pointing to the screen of her celfone calendar. It was marked by meetings, projects and social functions. 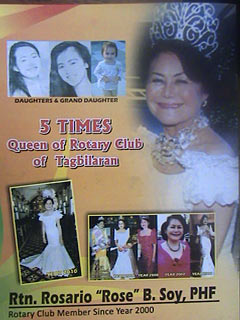 Dame Rose Soy shows no sign of slowing down
and bravely takes the role of premier humanitarian
in the philanthropic world.

"See," she scrolls back to her August calendar of activities. "I need to attend all these functions."

It's impossible to ignore Dame Rose and her activities.

Love her or hate her, Dame Rose has created more news - for her beauty that she seems to endlessly possess and beyond - than almost every other Boholana in her time, perhaps except today's young beauty queens. But when you look beyond the news, you find Dame Rose is much more than the headlines.

Raising money for different projects certainly brings forth her inner beauty, as well. She shows no sign of slowing down and bravely takes the role of premier humanitarian in the philanthropic world.

And she shows no signs of changing that trajectory.

Dame Rose is known for having paved the way for the now booming Bohol tourism in her capacity as a travel specialist. For that, Bohol owes so much to the Bohol's Queen of Tourism. She has talked different people from the different parts of the world. She has met different people who come and go long enough to know who are real; who are not. She has weathered enough storms to know how she could rise on her feet. She is in control of herself.