The November 23 Movement urges Facebook and Twitter users
to use this photo as their profile pictures to commemorate the
first anniversary of the massacre.

It has been a year since that infamous day. There have been no convictions. A trial continues, hidden from public view by a Supreme Court ruling prohibiting live coverage and cameras inside the courtroom.

"As we do [commemorate the massacre], let us renew our resolve to hold this administration accountable for the lives lost because of its apathy, even outright hostility towards media, and its politics of expediency emboldened the enemies of press freedom, many of them its allies, to continue enforcing the ultimate censorship--death," the Union of Journalists of the Philippines (NUJP) statement said.

There will be a motorcade of memory, as the families of the November 23 massacre victims mark the tragedy's first anniversary by retracing their loved ones' last journey all the way to the desolate hilltop where they died.

That will be only one in a series of activities across the country during the week-long commemoration of last year's widely condemned massacre of 57 people in the town of Ampatuan in Maguindanao province in southern Philippines.

Life after the Maguindanao massacre will never be same again. The incident, dubbed "the single deadliest event for journalists in history" has shattered the faith in the influence and power of the media in the Philippines.

It took quite a while, but hunky model Genes Alfeo "Geff" Jabines has finally admitted that he has been "exclusively dating" Miss Tagbilaran 2010 2nd runner-up Ma. Amy Fiel Booc. Geff (you may have noticed that his "screen name" is a little different, in that he added an "f" to the end, so he is now Geff) made the revelation on Facebook that he is "in relationship with." 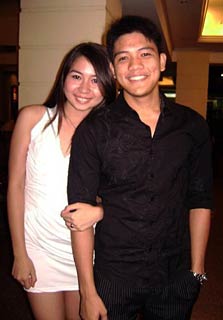 The revelation puts to rest speculations that Geff and Amy are already an item. "I am enjoying her company...and I can be what I am if we are together," says Geff.

Amy, who is a part-time model at the Island City Mall, keeps people awestruck with her captivating smile and easy humor. A bit shy and undeniably humble it's hard not to love Amy. Right, Geff?

It was at that memorable Runway Icons' The Glamour 12 Model Search event in July when Geff was observed to have been "mesmerized" by the radiant Amy. Now, did the "fascination" start that event?

They are sighted in public places; they are no longer hiding their romantic togetherness.

"They are seen together and they are happy," says VRS. "Who wouldn't be in love with your boyfriend if he talks proudly about you in public? He is the man." Geff was once asked on how to make a relationship work. He confidently disclosed, "Be what you are."

Geff and Amy are two beautiful people in love with each other in a world where everyone has to be beautiful. They stand out because their beauty comes from within.