They were the crowd's early favourites. Even before the results were announced, the crowd was already chanting B-O-H-O-L! B-O-H-O-L! And when they were declared winners in one of the country's prestigious inter-campus pageants, everyone's rejoicing—the hills are alive and the tarsiers are awake — they were cheering loudly "Bohol! Bohol! Bohol!" And we love it! 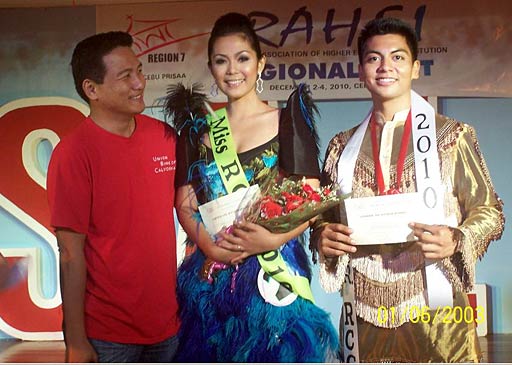 Blake Mahecha Valles, a Nursing student, and Miss Bohol Sandugo 2010 second runner-up Felisse Marie Carvajal, a HRM student, both from Holy Name University (HNU) emerged as the winners of the Mr and Miss PRISAA Region 7 competition held on Dec. 3 which served as the highlight of Regional Collegiate Association (RCA- 7).

Both will be carrying the banner of Region 7 during the Parade of Athletes in the National Collegiate Association Games scheduled February 20- 27 in Manila. They will also compete with 16 other regional bets for the 1st ever Ginoo at Binibining Pamantasan ng Pilipinas. 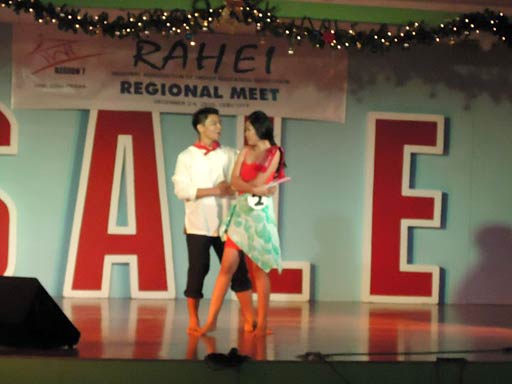 ...and they wowed the crowd of their "Pasayawa Ko Day" in the talent competition.

According to their mentor/coach, Bohol's seasoned host Raul Phillip Gatal, an HNU faculty member, the pair was cheered on by the Cebuano- dominated crowd during the final competition. They were wildly applauded during the talent competition where they performed the novelty song "Pasayawa ko Day." They were dressed up by top Cebuano designer Hanz Coquilla and styled by talented make-up wizard Charlow Arbasto of Bohol.

Barely five hours after they were crowned at glittering ceremonies in Cebu City, Bared tried to pick the winners' brains to another round of Q&A.

This is your PRISAA Moment.

How did you prepare for the contest?
Felisse: I read a lot of books and i prayed very hard for God's guidance.
Blake: Diet, exercise and asking lots of questions.

As Boholanos, what qualities of being a Bisaya would you highlight in the national?
Felisse: Being conservative and being true to oneself.
Blake: Their quiet dignity, self- assuredness and sense of inner peace.

Who is your role model and why?
Felisse: It would definitely be my grandfather because he was that one person who really took good care of us and guided us in everything we do. He is always there to encourage and to support us
Blake: My parents because their guidance love and support have taught me to be the person I am today and also the type of parent I want to be.

Young people today are liberated and adventurous, willing to try everything. What's your stand on pre-marital sex and contraceptives?
Felisse: I am very much against of it because it is immoral. Sex is sacred and it should be respected.
Blake: I believe that people should be aware of the meaning behind PMS as well as know the consequences that they may face.

What do you think does the world needs most right now?
Felisse: Unconditional LOVE.
Blake: Unity because working together can promote the well being of society. It also will share ideas to improve the ways we deal with issues such as poverty and education

If you were PNoy, what are the three priority problems would you attend to?
Felisse: Quality of Education. Unemployment. Poverty.
Blake: Poverty unemployment and education

Who would you choose, a rich wo/man who is not good-looking or a handsome guy/beautiful lady who has no money?
Felisse: None of the above because when I choose a man it should be based on my feelings, we should have a connection. It should not be based on wealth or looks'
Blake: Depends on their personality and if it meshes together with mine.

Does your boyfriends/girlfriends possess the qualities of your ideal wo/man?
Felisse: I can't answer that because I don't have a boyfriend.
Blake: Someone who I can be myself around.

If you were somebody else, who would you like to be and why?
Felisse: I would rather rephrase the question. It should be who do I look up to? It is God alone that I adore. He is very kind and patient, very loving and powerful. He is perfect.
Blake: I would like to be Manny Pacquiao because he is a person who is goal minded and puts all his effort into things, be it singing boxing acting and congress, not only for himself but for the fans and countryman.

What is your greatest inspiration?
Felisse: My experiences with my family.
Blake: My family, all whom have qualities that I strive for to improve and better myself.

What is the essence of being Mr and Ms PRISAA Region 7?
Felisse: Miss PRISAA Region 7 should not be taken or understood as an avenue to showcase perfect cuts and curves, beauty of the face nor to promote only oneself and earn popularity. It is rather an avenue to present the values, principles, and culture one holds dear to her heart. It is about doing your best by resting in God's arms rest assured that His ways are without fault. Being a role model is an instrument of truth. It is about showing the real you rather than faking things out in trying to please the people around. This verse Proverbs 31:30 guides me in activities such as PRISAA "Charm is deceitful and Beauty is fading, but the woman who fears the Lord shall be praised."
Blake: It the embodiment of the people whether it be beauty intelligence culture or confidence