Picture this: Cool wind, calm waters, majestic mountains and picturesque sunset. Then there's a meadows of flowers... Somewhere in Ireland? No, there's a kind of place somewhere in Sierra-Bullones, Bohol. 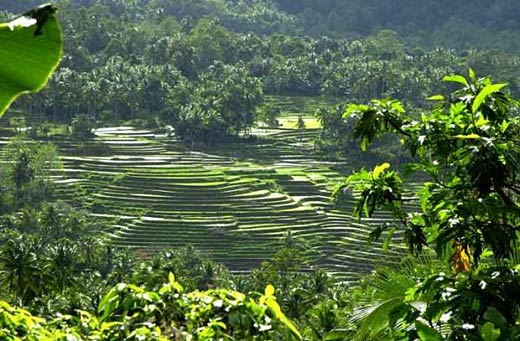 The breathtaking rice terraces in Sierra-Bullones.

Sierra-Bullones has hogged the headlines not because of its natural beauty but because of the alarming widening land cracks. My media colleague Edward Guyano (the voice behind the popular radio DJ Inday Charity) and yours truly went to Sierra-Bullones to check the land fissures for our beat.

Widening land cracks caused by mass ground movements due to minor tectonic tremors have alarmed the residents of Magsaysay, Dusita, Abacahan at Danicop after heavy rains poured in for the past days last week. The highway road (which leads to Jagna town) is greatly affected.

The house of Danilo and Jocelyn Liwa was not spared by the land fissures. Their sala and kitchen were severely damaged. Jocelyn shared that she feels the land is moving. "Maskin wala ang ulan karun mingdako gihapon ang iliki sa yuta. Feel nako nga minglihok ang yuta. Nahadlok ko… (I have this feeling that the cracks are widening every day...I am afraid...)." Jocelyn has to give birth next month; she told her husband to transfer to another place before an incident will happen.

A few meters from Liwa residence is the home of Lola Epefania Cabalan, 67, whose kitchen was moderately damaged by the cracks. "Karun pa ko kasuway sukad sa akong pagkabata... (It's my first time to experience such phenomenon)." Asked if she feared the land fissures, she answered: "Isalig lang nato sa Ginoo (Let us just trust the Lord)." 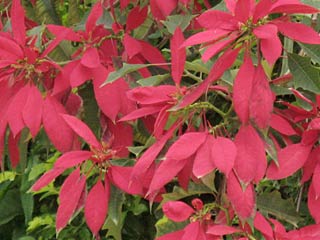 Poinsettias and other wild flowers grow naturally and
abundantly in Sierra-Bullones.

Of all the houses in Magsaysay, the house of Lola Ceferina Juyad was heavily damaged by the ground fissures. The house made of concrete materials has to collapse anytime soon. The fence, kitchen, rooms and ceilings were destroyed. She has to abandon the house for safety. "Nahadlok ko mahagsakan ang balay (I fear for my life if the house will collapse)."

There was no boredom with Lola Ceferina. She had many stories to tell about her place, including her adventure in Manila and her love story. Her hearty laugh echoed through the place when she shared funny things.

The local officials of Sierra-Bullones advised the residents to leave the area at the soonest time possible due to the land cracks that may trigger landslides.

Edward and I joined the officials from the Mines and Geosciences Bureau (MGB) Region VII based in Cebu City who conducted an investigation in the affected barangays last Thursday. They feared that another landslide may hit the area.

While visiting the residents, I have noticed one thing: they were smiling. Where in the world can you see people who can smile even during adversity? We Filipinos can smile at everything! 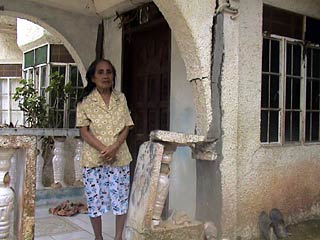 Lola Ceferina Juyad can find time to smile despite the land
cracks which destroyed her house.

Like Lola Ceferina, we can easily cope with all kinds of problems that may arise. We have the sweetest and the most genuine smile in the world because of the happiness that was in depth in our nature.

By the way, in Sierra-Bullones, the land glows with green-colored beauty with misty, verdant countryside. You will be entranced by its scenic mountains and rivers, by its magnificent rural panorama, and by the variety of color, a profusion of greenery and flowers. Once seen, Sierra Bullones' beauty is difficult to forget.

The town is fundamentally agricultural with a lot of wild flowers to delight the locals and visitors alike.

Every house has flower gardens. Folks grow anthurium plants, cosmos, roses, daisies and other wild flowers. There are poinsettias with beautiful magenta leaves. There are wild flowers with attractive foliage and colors naturally grow in rocky places, banks, lanesides and hedges.

There is nothing I like better than to travel along a winding rural road drinking in the beauty. 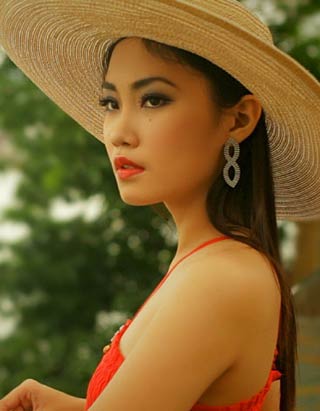 Just recently, she is busy preparing for her graduation this March (she is taking up Masscom at the Holy Name University). Bienna is proving that he's not just another beautiful face in the society.

"My hosting stints are helping me become a well-rounded person," beams Bienna. "I'm very excited for every opportunity to come."

She turned sexy in a commercial for Panglao Island Nature Resort and Spa (PINR) and in the short film Erika which was shown recently in the Cinema Region, and a few other minor shoots.

See how Bienna will fare in a "sexy talk." Asked what made her do it, Bienna told Bared, "Because I love doing it."

Since Bienna is on sexy mode, Bared let her answer a few "sexy" questions.

What is sexy to you? For me, it means confidence and wit paired with the right attitude.

What makes you feel sexy? Good health, really nothing beats being the one who swims well deep underwater.

What qualities do you want in a man? Someone who isn't friendly, who is stern, who teaches me instruments and tolerates a stressful day.

Sexiest sound (musical instrument): I'm musically inclined and I play most of the instruments so I would have to say all of them. But nothing beats the piano and contrabass.

Sexiest song: For the love of God by Steve Vai.

Sexiest part of your body: Waist.

Sexiest time of day: 3 in the afternoon

Sexiest scene she has ever seen in a movie: Oh I like the scene in Bridges of Madison County

Sexiest scene she has ever done: Some photoshoot.

Sexiest fantasy: Being a mermaid and then, watching humans by the shore.