Bared... Sierra-Bullones has the tallest Santa Claus in PH

Seen: The Jukebox King and Plaka King Victor Wood was in Bohol for his first concert at Calape Cultural Center last night. In Calape, Wood brought back fond memories of Mr. Lonely, Sweet Caroline,I Went To Your Wedding, You Are My Destiny, Crying Time, Paper Roses and The Great Pretender - his biggest hits.

Scene: Wow! Fireworks, a licensed manufacturer and distributor of superior pyrotechnic devices made from imported materials, will open its Bohol outlets for the Holidays on December 16 along Baclayon National Hi-way near Cignal Cable and La Paz, Cortes near Manga Bridge V-hire Terminal. This piece of good news is from Sam Pingkian. For inquiries, contact Sam at 09173748099/(038) 5019988/4120074.

Scene: Members of the Alpha Phi Omega (Apo) Zeta Beta and Zeta Epsilon chapters will visit Aliguay Primary School in Maribojoc town on Dec. 13 for the Christmas charity project. The adopt-a-school project is part of the 86th anniversary of Apo. For queries, call Brod Cesar Rubi at (038) 501-8242/412-0203.

Seen: A surveillance camera caught the "almost famous personality (AFP)" in the city stealing the high-end gadget of a participant in a conference AFP was the resource speaker. "The participant asked the care taker of the government building to review the CCTV the day the ipad was lost. Naa siyay kutob nga gikawat to," shared the roving VRS. "AFP was caught on CCTV picking the ipad inside the venue. AFP was interrogated by the office staff he was connected before. However, AFP denied to death jud that he is innocent. Then police officers came to investigate, AFP still insisted he's innocent. Shocked to the max nalang siya when confronted by the closed-circuit TV camera footage. AFP saw himself! Tagam!" added VRS. 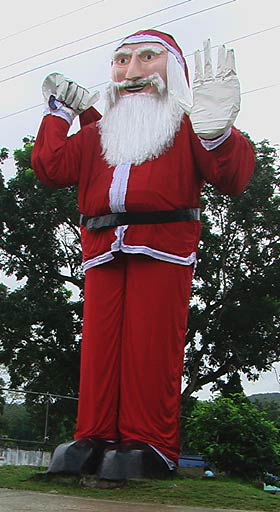 The giant Santa Claus in Sierra-Bullones, Bohol
colors the Yuletide Season. This Santa Claus is the
biggest and tallest in Bohol and probably in the
Philippines.

We know this after having gone to Sierra-Bullones last week to attend the town fiesta. The town's Santa Claus is finished.

It is touted to be "the biggest and tallest Santa Claus in Bohol and in the Philippines" and rightly so: It measures 25 feet. Their Santa Claus is a white-bearded man wearing a red coat with white collar and cuffs, white-cuffed red trousers, and black leather belt and boots. It has eyeglasses, too. His other hand is carrying a bag and the other hand is making a high-five sign.

It took one month to finish the foundation of the Santa Claus; and two weeks to dress the Santa Claus. It should be ready before the town's fiesta on Dec. 8 and we're thankful enough for that, aren't we?

"This Santa Claus measures 25 feet, the biggest Santa Claus and the tallest in Bohol and maybe in the Philippines as of this time," said Restituto Perocho, a municipal employee.

All day long, and both prior to and after the town fiesta, people from the neighboring towns would come to visit and have their picture taken in front of one of Bohol's most famous and recognizable Christmas attraction.

At the foot of the gigantic Santa Claus, you could see kids playing. Then, there's Lorenzo Butron, a blind musician who hails from Alicia town. He's roaming around and playing Christmas carols accompanied by an old guitar and a harmonica.

This year's Christmas, he really wants to make some real money to have an enjoyable Christmas. Ten days he did already the towns caroling. So far, he has earned 600 pesos which is enough to buy rice and other needs.

Lorenzo lost his sight when he was eight years old. When Lorenzo learned about the gigantic Santa Claus, his heart leapt for joy. "Kita kog Santa Claus gamay pa ko pero gagmay man ang Santa Claus sauna. Maskin dili nako kakita pero kahibaw ko naa siya (I saw Santa Claus when I was a kid and it was small. Even though I can't see it, I know he's there," he explained.

"Motuo kog Santa Claus kay Katoliko man ko. Hinaot unta iya kong tabangan ug kaloy-an, (I believe in Santa Claus because I am Catholic. I hope he will have mercy on me)," said Lorenzo.

Then, he started playing his instruments to the tune of Jingle Bells. 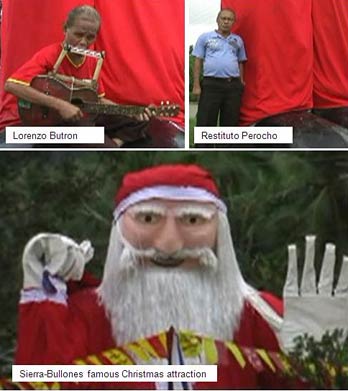 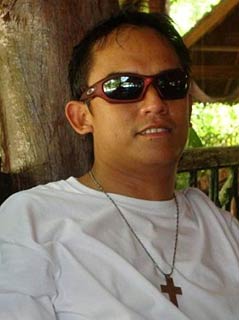 Like most everybody, Dr. Homer Caseńas Singco will be home for Christmas no matter how busy he is.

"Christmas is better spent with the family in Jagna," Doc Homer confessed during a chat with Bared while treating dogs at his vet clinic (along 53-A Airport Road, Cogon District, Tagbilaran City, Tel. No: (038.) 501-9021, Cell No: +639994263392). "Christmas is of love and compassion and of family bonding. That's why I make it a point to drop everything and be with my parents during Christmas."

How about celebrating Christmas with pets?

"Pet owners can celebrate Christmas with their pets in a fun and safe way. They can buy presents like dog biscuits," said Doc Homer. "They can dress up their pets in holiday gear, or just put a Santa hat on then. Your pet can have the excitement of having their own presents on Christmas day, too!"

The path to becoming a veterinarian is never easy, but Doc Homer learned that a longer journey makes for a better adventure.

After graduating from the Visayas State University in Baybay City, Leyte, he worked in a vet clinic in South Island, New Zealand. "I stayed there for two years," he recalled. He returned to the Philippines and he worked as a senior vet at Ole Veterinary Hospital, a premier veterinary hospital in Cainta, Rizal.

Home is where the heart is. He decided to go back to Bohol. "I'd like to stay close to home and to establish a vet clinic."

Is he happy with his career? "Workings with animals take a great passion and patience. I guess this is true to almost every job but this is where I love to do and where I am most fulfilled. I have been in love with animals since childhood. I even had a dog when I was in grade one and that at the age of 7. This is the job that I would love to do and to see myself grow."

Have you been bitten by an animal? "Yes. You could not be a veterinarian if you wouldn't be bitten by an animal." Of all trauma-related veterinary visits, 10 to 15 percent are related to bite wounds, "I had been bitten several times with my dogs but I have them vaccinated. I guess all animal lovers or pet owners should do the same. Safety should always be considered responsibly. Prevention is still better than cure," said Doc Homer.

Homer's passion for animals started when he was a young boy. Among his pets, dogs are his favorite. "I have one Shih-tzu and one Aspin. I had one native cat, too. I named my dogs Son-joe, Coycoy and Ba-an for my cat."

A typical day for Doc Homer is waking up at 3 a.m.; checking the admitted pets, spending hours the clinic and having a siesta at 1 p.m. Sometimes his schedule changes when he has an emergency call from patients. "The work is hard but if you work with passion, it becomes so easy. I never forget to say prayer before I work. Well, this is aside from breakfast and the regular things we do every morning." 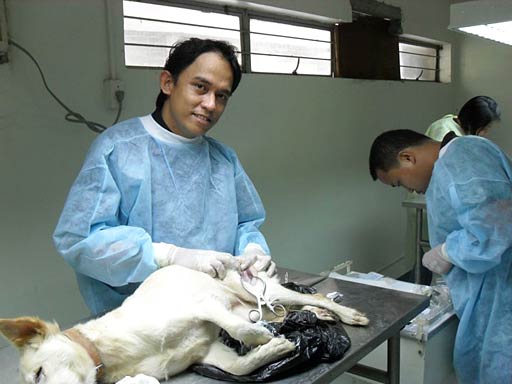 In Bohol, a number of people are having pets."Yes, but sadly some pet owners are not responsible. Others just owned a pet to look after their house without giving the pet's need. I think everybody should know that dogs should see a veterinarian in two to three weeks from birth. And should be regularly check twice or thrice a year."

Doc Homer also shared the therapeutic benefits of having pets at home. "Studies reveal that pets can reduce stress and control blood pressure even better than drugs. Pets can ease our loneliness, reduce our stress, promote social interaction, encourage exercise and playfulness, and provide us with unconditional love and affection." 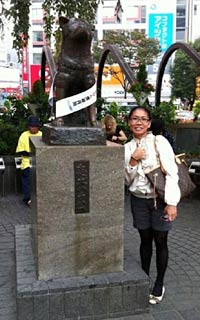 The people of Japan was so touched by
Hachiko's loyalty and love for his owner
that a monument was erected at Shibuya
Station in Tokyo, Japan. Photo shows
Jagnaanon Sarah Bajamonde Onodera, who
lives in Japan for 10 years, at the statue
of Hachiko.

How about bringing pets at home? "New pets are new family members and the whole family should be involved in the discussion. Don't rush into it. You need to consult all members of the family because owning a pet does not affect just you. Make sure you know how to care for that particular animal. Choose a reasonable animal and one that you know you can take care of or can match your lifestyle. Having a pet means responsibility and dedication," he advised.

He had seen the movie Hachiko, a must for pet lovers. (Hachiko is a dog hero which inspired Japan in thinking that friendship can last forever. Hachi was adopted by a college professor who later died while far from Hachiko. Hachiko waited 10 years for his master to come back after which he died.). "I watched it many times. I highly recommend everyone to watch it not only to animal lover or dog owner."

Told that animal doctors are better lovers or magnets for women, Doc Homer laughed a bit.

"It works to me. But it depends, to own a pet comes with discipline, love, patience. It might help."

At 32 (a Libra, born on October 8), Doc Homer is still single. Is he ready to settle down?

"Not for now but it will come at the right time. No need to rush or panic."