Margarita dela Peña is one interesting person when I visited the town of Bien Unido last week. She shares interesting stories all sundry and you will be moved when she laughs.

Margarita is the second mom to Bien Unido Mayor Niño Rey Boniel. She calls the mayor In-In with so much fondness.

When In-In was growing up, I know he was going to be a great man, Yaya Margarita shared.

Now you know why the quiet and shy young leader (as what people think), the second youngest mayor in Bohol (after 21-year-old Inabanga Mayor Jono Jumamoy and probably third youngest mayor in the Philippines) and heartthrob smells that sweet. No longer a yayas boy, but a man. 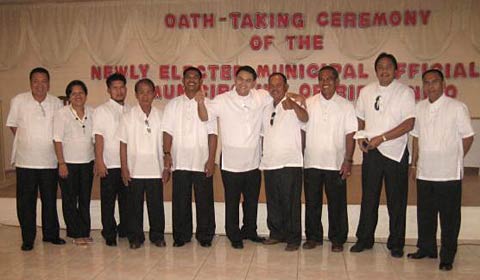 Mayor Boniel drew of collective swoon from with young (who instantly fell in love with him) and old (who took him as a cuddlesome little brother or an ideal son.)

And take note: at 28, Mayor Boniel is an eligible bachelor.

If Mayor Boniel will be in Cebu for business, Yaya Margarita and members of the households would miss him. Mingawon mi niya, Yaya confessed.

In Isla Mamawan, there was a man who needed help after an operation. His wife searched for money to pay for the medicines for two days. It was Mayor Boniel (who was still a private citizen) who helped the man.

Another story is about Alejandro Avenido who needed money for his operation. It was Mayor Boniel who came to the rescue.

There are countless stories about Mayor Boniel when he was still a private citizen. 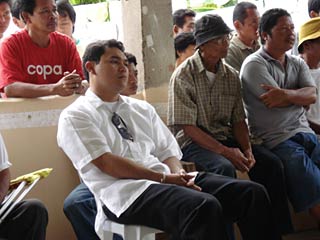 How Mayor Boniel threw his hat into the political arena, according to the people Ive met is uncanny. It was last year that Mayor Boniel had a vision from the Sto. Niño. The message? He needs to save the town. I asked Mayor Boniel to confirm the story, but he just answered, faith moves mountain. After all, he is named after the miraculous Sto. Niño.

After the elections, Mayor Boniel thinks big for his hometown. He is challenged to serve the people more. He is thinking of implementing income-generating projects.

He is confident that during his term, Bien Unido will be known in the country as the seaweeds capital of the Visayas. When I asked him how would your term as town mayor different from the previous mayors, he answered, Ill do it hand-on. I dont do it in remote control.

 I always believe of people empowerment and I dont give up... all the good plans for my town, he shared.

The executive and legislative branches thoroughly discussed the strategies for the improvement of basic infrastructure like improvement of water system, funding for basic agriculture support services, farm-to-market roads, enactment of more codes to address various concerns and relevant topics for the town's development.

During the week of this tete a tete, Mayor Boniel was running here and there. He had just arrived from a three-day seminar in Cebu and preoccupied with a hundred another things.

Here is Mayor Niño Rey Boniel straight from the heart.

What do you value most? My family, my town and my career.

What do you want to achieve? To be of service to the people.

Music I play in my room: Slow RnB, alternative, romantic songs, acoustics and from the 80s of course

Person I want to meet? Elisha Ann Cuthbert (She is a Canadian actress whoase role is Kim in the American action-thriller television series 24. She had her first lead role in the 2004 fature film The Girl Next Door.  LPU)

Having problem of the heart is: Fair. We all have our own share to experience how to be heartbroken.

What makes you happy? Simple things can make me happy. But what makes me more happier is when I see my family intact. Our hometown Bien Unido brings me a positive energy. Everytime I see the people smiling, it makes me happy.

What makes you sad? If you think of bad things in your life, it can make you sad.

Do you ever find time to relax? As of now, not yet. But I make sure I can spend time with my family.

How much sleep do you normally get per night? 6-8 hours. I have only one body in a lifetime and I need to rest.

Whats the last thing that you do before you go to sleep? Turn on my MP3. Music heals, do you believe in it? (That is until morning-LPU)

And the first thing that you do when you wake up? Brushing my teeth

Boxers or brief? Brief. Im comfortable wearing it because I am man on the go.

Sexiest part of me: I dont know. What do you think?

What about vegetables and fruit? Vegetables, the green and leafy vegetables... and I like apple

Are you carnivorous? Yes, but minimal

How much liquid do you take every day? 5-8 glasses everyday

Do you have time to work out? None. I dont have time.

But youre into sports, arent you? Yes. I play basketball and I like firing. (Hes a member of the Kamagong Gun Club).

How do you condition your body? Badminton. Not to say it is a trend nowadays.

What part of your body do you think needs some improvement? I could not think of. Could you suggest?

Favorite hideaway? My room where I can play my MP3.

How often do you see your doctor? Very seldom.

And your dentist? Every month.

Do you apply anything on your skin? None.

And what food do you avoid? Nothing in particular.

Do you take vitamins and/or supplements? Vitamin C

What about massage? Youre giving me an idea. I like it. But so far, I dont have a time to go to massage.

What about movies? I am a movie buff. My most memorable movies are The rock, Face Off, The Count of Monti Cristo, A Knight's Tale, Girl Next Door and Rat Race. I like the Girl Next Doors girl, shes so sexy.

Single or into relationship? Of course, Im single and available.

What is your ideal woman? Smiling, gentle and kind.

Your ideal age to settle down? Probably 30? But true love can wait, right?

How do you know that a woman likes you? Through her eyes!

A few issues ago, we reported about the behavior of the HNU Central Student Government (CSG) officers.

True got a text message informing that nasuko ang taga CSG regarding your article sa Sunday Post. Nagsupport baya sila kay attend gud sila og meetings. (The CSG officials are angry of your article in Sunday Post. They supported (the event) because they attended meetings). Do you know that you threatened the organizers to withdraw your support for the schools new project?

His project of staging a concert of Christian Bautista has not in anyway promote values and character for the students to learn from. The concert was a lavish display of irresponsible and wasteful decision from a critical figure. And a band concert was held lately. VRS reported that the concerts have not garnered enough revenue.

First and foremost, a student leader must be crafty and wise in his decisions. Student governments are ideal training grounds for quality leaders in the future. Student leaders are critical figures in the campus being the role models.

Hence, a student leaders decisions and actions must profess primarily the concern on the welfare and interest of the studentrynot on wasteful clamor and childish fancy as what Dave Maulas has explicitly implied in his concert project!

Yet, Dave Maulas is still young and hes entitled to grow and learn from mistakes.. and so with the other CSG officials. I hope that he/they will not be stubborn and eventually learn from this mistake.

Continuing a tradition that started about seven years ago, the Tagbilaran Association of Southern California, Inc. (TASCI) recently sponsored a turn-around trip to the Spotlight 29 Casino to raise funds for its Scholarship Program. Led by the energetic current chairperson of the Board of Directors, Malou Derikito Saito, the busload of casino jackpot hopefuls included TASCI Vice Chairman of the Board, Al Estaca, and the following other members of the Board: Mila Tocmo Street and Joe Escalera who co-chaired the fund raising activity, Eva Karaan Labis who prepared the delicious snacks, Sammy Sarmiento, Jun Chatto and Immediate Past Chairman of the Board, Liux Corales, who was the overall coordinator of the turn-around. Also joining the group were Tagbilaranons Fred & Nena Borja, Inday Corales, Mila Torralba Espiritu, Peanut Fabiosa, Burie Ogan Frias, Michael Gatal (who was the days official photographer), Maridel Honculada, Dodong Labis, Romie and Leonore Ligason , Al and Babie Manigque, Errol Matig-a, Naty Mondilla Ramirez, Stuart Saito, Hedia Manteza Sarigumba, Luz Sarmiento, Merci Sarmiento, Boy and Jean Timbal, among other friends and relatives. Oftentimes TASCI members who could not join this fund raiser donate in cash or in kind: The donors this time were Gina Lantaka Ceballos, Violy Ramirez Tapan and Carrie Lumuthang Paltrow.

Although no one usually comes home with a winning worth bragging, the Real fulfillment comes in the genuine camaraderie everyone experiences every time the TASCI embarks on a fund raising project. To date the organization has benefited several students, having sponsored and produced ten graduates at the Central Visayas School of Agriculture, Forestry and Technology (CVSCAFT); there are currently 18 scholars, some of whom are individually sponsored by TASCI members throughout a students entire course. These young people maintain personal contact with the association and their respective sponsors through letters and e-mails and whenever TASCI Chairmen of the Board and/or officers are in Tagbilaran City, they meet with all of these scholars. Since the beginning of this ongoing project, Jun Chatto ably handled and coordinated it until last year when TASCI board member Dodong Jamero took over as Chairman of the Scholarship Program.

Past TASCI chairmen Liux and Inday Corales just received an email from Rochelle Manatad whom they sponsored throughout her course in education; she graduated in 2006 and shared excerpts of the note with other members of the association:

4th in overall ranking here in Lapu-Lapu City, Cebu and I ranked number 1 in our major.. I've learned to value the work . . .this is the reason why I've gone into teaching so that I am worthy to be called as one of your scholars. I will always treasure all the things you have imparted to me!

You can email me at leoudtohan@yahoo.com.

Read all 10 comments by readers.

This article has been viewed 346 times.