We like beautiful girls in beauty pageants; however, in the 3rd Katigbawan Festival in Catigbian town, the people paid tribute to the most beautiful creatures, not the beautiful women but the carabaos!

Yes, believe it or not but a beauty pageant for carabaos was held yesterday, June 16.

There were 15 beautiful and healthy carabaos from the town which are commissioned to join their barangays for this years competition.

There were invited judges for the pageant who are expert in their fields. There were criteria for judging from the committee composed by Councilor Zip Lastimosa, Erlinda Quilicot and all MAO personnel. Acting Municipal Mayor Fortunato Concon was the overall chair of the 3rd Katigbawan Festival since Mayor Robert Salinas, PN (Ret) is in the US. 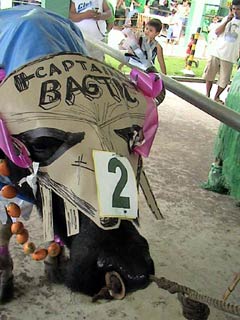 Just like humans, the candidates had colored eyelashes and nails, best dresses, colorful hair dresses and other burloloys (mostly are biodegradable) to make them more amazing.

I met a superhero carabao which named was Captain Bagtik. It has an impressive mask.

A parade was held in the afternoon in Poblacion and the final destination where ton held the pageant was in Bohols biggest livestock auction market.

There was also a talent showdown for the final judging. The candidates together with their owners showcased their talents.

There was no question and interview portion during the pageant but if carabaos could speak, Im sure they could give winning answers. I think of some questions if ever carabaos could speak when they are ready to answer questions like: How many hours you like to bath in the mud? Is your boss friendly? How many hours is your rest? Do you want fashion? These could be impossible, right?

The Carabao Queen, the highest award of the pageant went to contestant number five which at the start of the pageant was an instant crowd favorite. Sad to say, the owner Faustino Cardenas has yet to give a name for his carabao. He has to think of a unique name, maybe, Katrina Halili? Or Angel Locsin? The kids who were overwhelmed of its winning suggested to name his carabao Judy Ann.

Im so happy my carabao won the award, said Faustino. 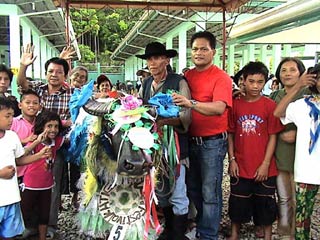 Faustino Cardenas, the winning Cowboy with his carabao (no name) declared as Carabao Queen of 2007. Photo shows Acting Municipal Mayor Fortunato Concon and some supporters.

He was proclaimed as the Cowboy of the Year award. His carabao received lei, cash incentives and Darling of the Crowd award and Best in Ramp Walk. She has her runners-up, too, for her one year reign. Other carabaos received the Sexy Carabao, Best in Costume, Friendly Carabao awards with cash and leis.

Carabaos are often used by farmers in the Philippines to plow the fields and as a means of transportation. It is one of the most important animals in the country specially in agriculture.

Carabao is locally known as kabaw. Both male and female have massive horns. Since the carabao has no sweat glands, it cools itself by lying in a waterhole or mud during the heat of the day. Mud, caked on to its body, also protects it from bothersome insects. 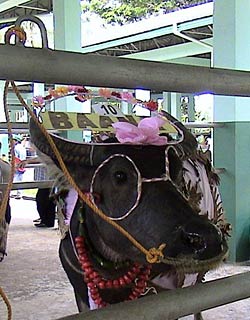 The carabao eats grass and other vegetation, feeding mainly in the cool of the mornings and evenings. In some places of the world the carabao is a source of milk just like the cow, or it may be slaughtered for its hide and its meat. Its life span is 18 to 20 years and the female carabao can deliver one calf each year.

Carabaos are indigenous to Southeast Asia; the carabaos were captured and domesticated as far back as pre-Hispanic times.

We are holding the carabao pageant to show that carabaos are important to us here in Catigbian. In this way, agriculture is promoted through this event. Katigbawan festival is a foundation day celebration of Catigbian featuring and promoting the tourism and investment potentials namely, Livestock auction market, cave exploration and livestock raising, Concon said.

Katigbawan is a feast for human and spiritual satisfaction from the Visayan word Katagbawan. It is also a combination of the words katigbi, tigbaw and kabawan. Katigbi, a grass species grown in the town, is the origin of the word Catigbian. Tigbaw is also another word for caves. 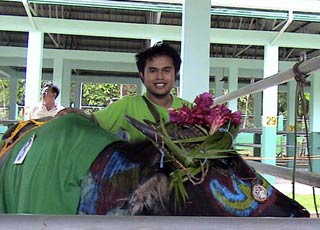 See how carabaos can be fashionable!

Kabawan is Visayan for carabao auction market which is known for in the province of Bohol. Here people can sell their livestock during Mondays without hassle to look for buyers, says Florante Robin, SK president.

If you wish to see how carabaos turn into beauty queens, dont miss the Catigbian Foundation Day which is held every June 15-17.

The Katigbawan Festival was featured at GMA-7's Saksi. You can watch the feature online.

Read all 8 comments by readers.

This article has been viewed 348 times.