For beauty aficionados, May is the season of beauty pageants. The latest is this years edition of Miss Tagbilaran (known as Mutya sa Tagbilaran in the past years). As usual, there were hits and misses in Miss Tagbilaran 08:

Has Tagbilaran City run out of beauties? This was a question raised by observant beauty pageant aficionados when a lovely lass from Panglao was crowned Miss Tagbilaran 2008. Yes, she deserved the crown but the main issue is the residency requirement. The truth is shes from Panglao. Stacy Mae Arisola who represented Taloto has no residency in Tagbilaran City as she hails from Garcia Hernandez town.

The organizers indeed have a lot of explaining to do regarding this matter. Further compounding the issue is the placement of a girl from the town of Clarin as one of the runners-up. Theres no guideline that Miss Tagbilaran is an open contest wherein contestants from other towns and provinces can join.

This years sterling committee (headed by Dave Maulas) was in bad light when the controversy of the pre-screening erupted in the air lanes. Even Dave was impolite to turn down the phone when he was interviewed on dyRDs Pulso (hosted by Batchoy Balba and Prof. Rene Real) about the controversy.

Is it improper to present yourself as a candidate without any proof? And to know that there was a legitimate contestant from that barangay? True unimpeachable Very Reliable Source (VRS) said.

The pre-screening committee (which I think not needed because not all barangays were represented) decided to choose top 10. Call it manipulation that Doroy was not included in the top 10 (she landed 11th during the pre-screening) but when it was thoroughly reviewed it was found out that Doroy was actually the 9th placer. The committee had asked an apology for the mistake they committed and instead of top 10 they made it top 12 either to accommodate other favorite girls and to cover the shame.

The pageant started on time and opened with the spectacular opening number which showcased the dazzling and breath- taking costumes of the 12 candidates and the superb performance of the Diwanag Dance Theatre and Cultural Troupe.

Miss Tagbilaran 2008 holds the distinction of being the first local pageant to be held at an air- conditioned venue, the Bohol Cultural Center.

This year's batch of candidates is one of the most competitive in recent years. After the swimsuit and evening gown competitions, the top five were proclaimed and the interview portion immediately followed. After an intermission number, the final three were called and asked the final question. After the obligatory farewell walk of last year's winner, the new Miss Tagbilaran and her court were proclaimed and crowned.

The minus points of the pageant include the very dragging choreography. For instance, in the gown portion, each candidate was given at least three to five minutes to show off her gown. By the time the evening gown portion was halfway through, a sizable number of the audience had either gone home or silently protesting of the ordeal of sitting through the rest of the show. The technical aspect of the show particularly the lighting effects were disappointing to say the least. Furthermore, the AVP's shown on the wide screen were very amateurish.

As expected, Bohols seasoned host, Mr. Raul Gatal, dazzled the crowd with his witty repartees and competent handling of the pageant's loopholes and technical difficulties. Even Rovilson Fernandez, executive director of Maxim magazine and partner of Marc Nelson in the Amazing Race (where the pair won third place) was impressed with Mr. Gatal's hosting.

According to my VRS, Mr. Gatal was only informed that he was to be the pageant host only two days before the pageant night! 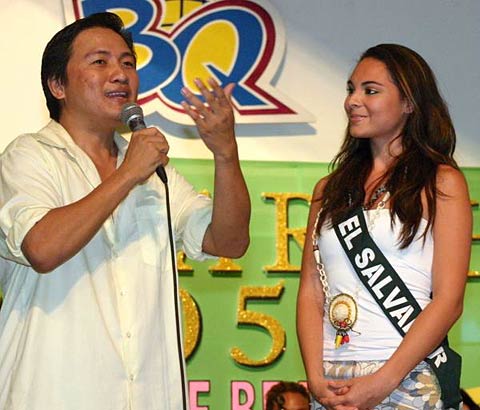 Furthermore, my VRS further revealed that kinawawa ng organizers si Mr. Gatal with a very measly talent fee. To think that he actually saved the show! A seasoned host like Raul deserves the best talent fee.

Overall, this year's Miss Tagbilaran pageant was a fairly decent production and definitely way better than last year. Here's hoping that this would be serve as a challenge to the organizers to continually improve the city's annual search for its fairest and brightest young ladies. It becomes less, less glamorous and prestigious.

Chocolate lovers had reacted violently of the removal of the Choco Hills and the shocking news that it cant be nominated either. Local officials and tourism stakeholders wanted an answer why Bohols Chocolate Hills was deleted off the list of nominees.

It is sad to note that it did not just drop in rankings, it completely got dropped off the site without a word or explanation. I was thinking there should have been a press release about it.. Apparently, not one of the n7w.com staff noticed its disappearance along with other nominated sites.

Other Boholanos presumed that it could be a nasty job of a computer hacker. A hacker intentionally gains access to a secure internet website, navigates and controls any information therein as he taps into the system website according to a press release.

The Bohol Sangguniang Panlalawigan (SP) Tourism Committee Chair and Board Member Ester Corazon Galbreath prodded the provincial lawmakers to launch an appeal to the search organizers. She said the organizers should explain how Bohols marvelous Chocolate Hills and Mayon Volcano were deleted from the list.

On his part, Vice Governor Julius Caesar Herrera steered the SP to make a formal communication to the Department of Tourism to ask for enlightenment on the matter, reports said.

Bohol First District Representative and House Tourism Committee Chair Edgar Chatto, upon knowing about the incident said in interviews that would personally lead a Congressional inquiry as to why it also happened.

Rep. Chatto told the Provincial Tourism Council chairman Peter Dejaresco that he to call the DOT and the United Nations Educational Scientific and Cultural Organization to ask about the possible de-listing of the wondrous hills from the nominees to the new seven world wonders list.

The point is they reacted violently when they didnt know the real score why the Chocolate Hills was removed.

Blaming the hackers would be unfair. The New 7 Wonders website is secured, too.

If these officials have had read the guidelines they would know what to do. Voting and campaigning arent enough. A special committee had to be set up because anytime the organizer would send queries regarding the Chocolate Hills.

And this is their response. Apparently, my concern was also their concern.

See what I mean? I just laughed at the fact that they had no clue about the reason why it got deleted in the first place.

Were just happy that the Chocolate Hills is back. Please continue voting.

Café Anembo which is located along J.A Clarin St., Tagbilaran City had successfully hosted "MEET THE RASTAFARIANS" with BROWNBUDS MENDELS LEGACY on April 18 and ESTRANGHERO on April 25. The event was jamly successful, chilled with huge crowd. The same was another realization of Cafe' Anembo's primordial objective, to support Boholano music scene.

Thanks to brother bands Pirates of the New Age, No Pets Aloud and Timber. 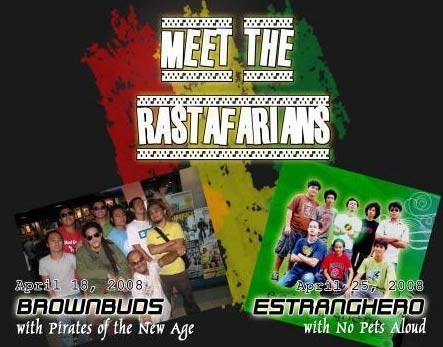 Heres an email from Vilma Yorong (Ate Vi to all)

Senator Francis CHIZ Escudero sponsored the annual Youth Leadership Excellence Award (YLEA): Ang Batang Lider Award, one of the flagship projects of the JCI organization. The objective of the project is to recognize the leadership qualities and academic achievement of elementary and high school deserving graduating students both in public and private schools nationwide.

In Bohol, YLEA was implemented by members of the JCI Bohol Chocolate Hills lead by its energetic LOM President JCI Member Amor T. Regner. Around thirty (30) elementary & high school graduates were awarded by JCI Bohol Chocolate Hills despite the limited time when the medals & certificates arrived from JCI Philippines, Manila. JCI members took time attending the graduations and awarded the YLEA medals and certificates to the recipients.

Jack wakes up with a huge hangover after attending his company's Christmas Party. Jack is not normally a drinker, but the drinks didn't taste like alcohol at all. He didn't even remember how he got home from the party. As bad as he was feeling, he wondered if he did something wrong.

Jack had to force himself to open his eyes, and the first thing he sees is a couple of aspirins next to a glass of water on the side table. And, next to them, a single red rose!! Jack sits up and sees his clothing in front of him, all clean and pressed. He looks around the room and sees that it is in perfect order, spotlessly clean. So is the rest of the house.

He takes the aspirins, cringes when he sees a huge black eye staring back at him in the bathroom mirror. Then he notices a note hanging on the corner of the mirror written in red with little hearts on it and a kiss mark from his wife in lipstick: 'Honey, breakfast is on the stove, I left early to get groceries to make you your favorite dinner tonight. I love you, darling! Love, Jillian'

He stumbles to the kitchen and sure enough, there is hot breakfast, steaming hot coffee and the morning newspaper. His son is also at the table, eating. Jack asks, 'Son... what happened last night?'

'Well, you came home after 3 A.M. , drunk and out of your mind You fell over the coffee table and broke it, and then you puked in the hallway, and got that black eye when you ran into the door.'

Confused, he asked his son, 'So, why is everything in such perfect order and so clean? I have a rose, and breakfast is on the table waiting for me??'

His son replies, 'Oh THAT!... Mom dragged you to the bedroom, and when she tried to take your pants off, you screamed 'Leave me alone, I'm married!!'

This article has been viewed 139 times.