Bared... In case of fire, what would you save first? 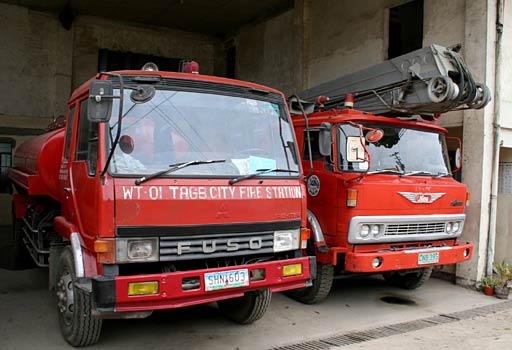 March is Fire Prevention Month in the Philippines. It reminds us all that though the discovery of fire was one of man's earliest technological discoveries, it has since claimed countless lives, destroyed properties and dilapidated spirits.

There is fire in the house! What would you save first? It's better to think about these things now, instead of, uh, during a fire, when all we could probably do is panic.

Here are some personalities in Bohol who are prepared for such a catastrophe.

Kit Oppus, city councilor: Nothing. Basta people are safe, I don't have to think of saving things, honestly. Call it crazy but for as long as I have my name and integrity intact, I can redeem everything material I can lose. After all, we are here on earth for one good reasonto fulfill what God has for us.

Rammel Cagulada, accountant: Photo album especially those pictures which are not posted on Facebook. You can see those anymore di ba?

Benjie Oliva, youth leader and National Youth Commission (NYC) commissioner for Visayas: My family. They are the most important in my life.

Dr. Mary Grace Uy, dentist: My kids, then my jewelries.

Joseph Lemuel "Dongley" Camacho, government employee: I would save my life first and of course "never leave your partner behind" quote from the movie Fireproof.

Loida Lagonoy, beauty queen and entrepreneur: What has been ashened cannot be retrieved. Survival after the fire is just more vital.

Katrina Schoof-Chu, businesswoman: My bag which contains my wallet and cellphone. But if I have to be specific, probably my wallet. A cellphone would be useless if you didn't have any money. At least, I can buy a new cellphone if I had my cash and credit cards with me.

Mary Anne Aparece-Verga, DILG personnel: If I was going to lose everything because of fire, there are three possessions that I would want to save with me if I have to evacuate my house. Although not my most prized, the laptop and cellphones. Without it I couldn't do my job nor be able to communicate with my family and friends. Next would be my family photo albums. Those pictures are of our family and I want to save the memory. Lastly and most importantly would be my rosary. It's the possession I cannot live without.

Reigh Monreal, writer and private secretary to the Mayor: The wedding photo of my deceased parents. It is so precious because it is the only photo taken of them together. In fact, it is one of only three photos with me.

This article has been viewed 88 times.