When you walk through a storm
Hold your head up high,
And don't be afraid of the dark
At the end of the storm
Is a golden sky,
And the sweet silver song of a lark.

That song, You'll Never Walk Alone (a show tune from the 1945 Rodgers and Hammerstein musical Carousel), was requested by cultural icon, educator and dancer Oscar Buhion Real to be the finale number for the 30th anniversary show of the famous Bukang Liwayway Dance Troupe in September 2009. Of course, Oscar's kindred soul, Wincesa Espejo-Araoarao, fulfilled the request and even made the event more meaningful as she and Oscar danced together before the (past and present) members of Bukang Liwayway... and that was their last dance.

To all Boholenians, let's pause for a while and offer a prayer, Sir Oscar Real passed away @1256 pm here in HNU Medical Center, we tried to revive him but his liver cancer has already taken its toll.

Even long before he was diagnosed to be suffering from liver cancer five years ago, Oscar Real was prepared to die.

"Yes, he told me that he's prepared to die. He shared that I want to enjoy every second, every minute of my life,'" confessed Fiel Angeli Araoarao-Gabin who, together with her mother Wincesa, were saddened to learn the death of Oscar. "He was spending his last years doing the very thing that he loves teaching dance, dancing and attending dance workshops," added Fiel. 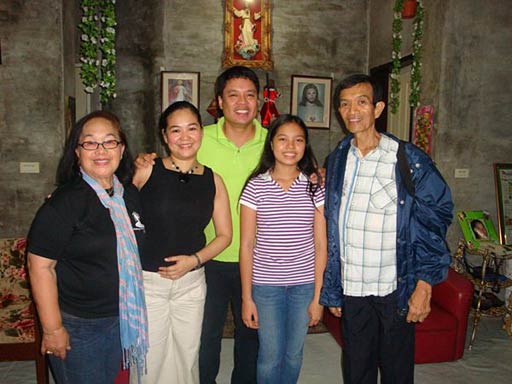 Oscar was rushed to the Holy Name University Medical Center after he experienced pain. "After he had confession, he received Holy Communion and the last sacrament - anointing of the sick to think that he was an INC convert - he embraced Catholicism again," said Fiel.

Even if the Bukang Liwayway members and teachers knew that the Icon was ill, going in and out of the hospital for medication, the news of Oscar's death came as a shock not only to his family but to his students, friends, cultural advocates and artists.

Oscar died with his house helper and co-teachers headed by Mrs. Aparicio around him, together with a nephew Bentong whom Oscar treated as his own son.

Although he fought as hard as he could, Oscar was prepared for the worst, said Fiel.

Oscar would have turned 61 (Sept. 11). Last year, the members of the Bukang Liwayway paid a tribute to Oscar on his 60th birthday. The thanksgiving party captured "Celebrating the Banquet and Pinnacle of Life: Timeless."

Oscar Real graduated at Laya Elementary School and Saint James College. Early in his life, he had never thought that he would probably make waves as he did in his chosen field of endeavor, but, even in his younger years, his creativity and terpsichorean prowess were evident.

By a twist of fate, the English teacher became a member of the world-renowned Bayanihan Dance Troupe. Years after, as destiny would have it, he settled for a teaching job at Bohol National High School which started back in the late 70's, an opportunity for him to harness his talent, excelling in folkloric dances.

There were countless victories in the dance competitions that he savored, apart from his unwavering commitment for Bukang Liwayway. Oscar Real became an institution in the arts, not only here in the province of Bohol, but in other provinces in Luzon, Visayas and Mindanao, as well.

"What do I remember most about Sir Oscar Real?" asked Fiel. "He was there for me during my significant milestones as Bohol National High School (BNHS) Bukang Liwayay Dance Troupe and Drum and Bugle Corps member, Miss BNHS Personality 1986 and Miss Tagbilaran 1987. In college, I've learned that one way for a man to achieve immortality is through the arts. For somebody who has reached the pinnacle of his life by doing the very thing that he loves  dancing."

Now, what is really inspiring about Sir Oscar? "His unwavering passion for the arts and zest for life, despite the challenge of his health condition. Nevertheless, he has proven to all that more can be achieved if a person believes in himself. After all, nothing is impossible to a willing heart," said Fiel.

In hindsight, Wincesa, who is in New York, said, "From my grieving heart, mind and soul, I deeply mourn for the loss of my buddy, co-founder, co-adviser, co-choreograoher.co-teacher and dance partner, the uniquely and truly wonderful person I have ever associated in my whole conscious existence, Sir Oscar Real."

Oscar and Wincesa and few other teachers founded the Bukang Liwayway Dance Troupe of the Bohol National High School on June 21, 1979. Until now, the troupe has survived ably and strongly because of the untiring effort of Oscar doing all the needs and concerns of the dance troupe all by himself since Wincesa left for the USA in 1989.

"Sir Oscar, you are the A +++ achiever and for all the knowledge, skills and expertise you have shared to all members of the dance troupe, the old and the present members, are legacies we shall treasure forever. Sir Oscar Real, I salute you!!! Your soul is at rest now with the Lord, the Almighty God," added Wincesa.

Holding back tears, Pete Cabalit, said to be one of Oscar's favorites, remembers him to be a "kind and dedicated mentor."

"He was more than a father to me. We mourn the loss of Sir Oscar Buhion Real, our beloved long-time Bukang Liwayway Dance Troupe choreographer and adviser. Requiescat in pace, Sir! Thank you very much for everything."

Said Bryan Santillana, "From the bottom of my heart, I extend my condolences to my beloved high school teacher dance teacher Mr Oscar Real who passed away! I will gonna miss you Sir! You're still in my heart where ever you are! Our lord Jesus Christ will guide you!"

Estela Silverio-Capao said she is saddened by Oscar's demise, adding that Oscar "inspired me in my youth and in my golden years."

JP Maslog and Jerameel Decasa were also saddened to know the death of Oscar. "Loss for all of us. He is a beloved friend and leader in the arts," said Jerameel who is a cultural worker.Zoom

Oscars' remains lie at his residence in Barangay Montaña, Baclayon. Interment date will be announced later.

This article has been viewed 109 times.