Scene: Rep. Erico Boyles Aumentado celebrated his 72nd birthday last Friday, May 18, in Ubay town. The second district solon thanked his family and friends for organizing a birthday bash for him. Spotted were Mayors Eutiquio Bernales, Tom Gonzaga, Ronald Lowell Tirol and barangay captains. Special guests were Representatives Cynthia Villar and Mitos Magsaysay. On hand to help Erico entertained their friends was his wife Greenie. The birthday bash was "a celebration of 72 years of God-given life and 46 years of highly productive public service." 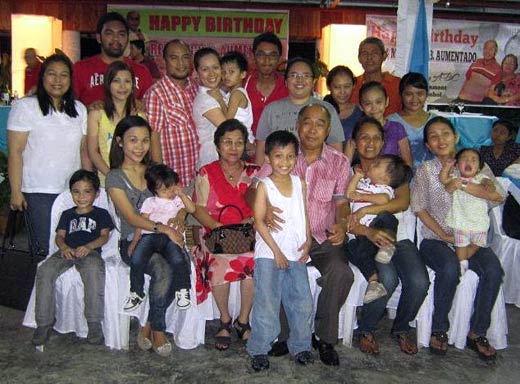 Scene: Mariecris Evardo, a member of the Lungsuranon Performance Arts Ensemble (LUPAE), won the Anyag sa Tubigon 2012. Raymund Delgado, erstwhile Tubigon's Queen of All Media said, "So wonderful batch of Anyag girls whom I had a chance to mentor. Girls, always remember that the journey doesn't end in winning the crown. Real crowns are the things which we are made of." 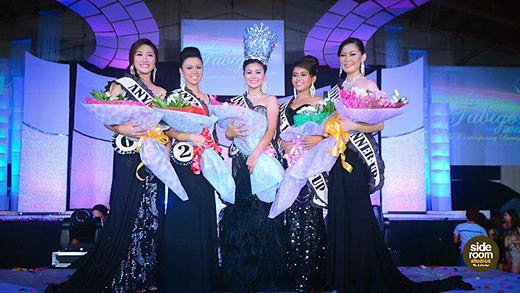 Scene: A trainer/handler cried foul when the organizers of a popular beauty pageant in town allegedly harassed him when he was not allowed to enter the venue on the apparent copycat issue. "He was barred from being the handler of a candidate who was a crowd favorite who did not make it to the final five," shared VRS.

Scene: Beauty watchers were dismayed to see mediocre trophies awarded to the winners of a prestigious beauty pageant. "Minus jud ang trophies wala nabagay sa pageant. If not of the beautiful girls, it looked like it was another basketball tournament in town. It was not of international taste," said the roving beauty pageant VRS.

Seen: Miss CONBUSAC 2011 Tessie Sumampong La Mourea of Washington and Miss CONBUSAC Tourism 2011 Lorraine Ancog Galang were spotted at The Buzz. "They're here for the TBTK 2012," said a socialite VRS. "They are stunning! Tessie is a wow," added VRS. Also spotted in Tagbi was Gisela May "Jiji" Apalisok. The Texas-based Chic Geek, who was a lifestyle editor in a local newspaper, is here for a vacation. 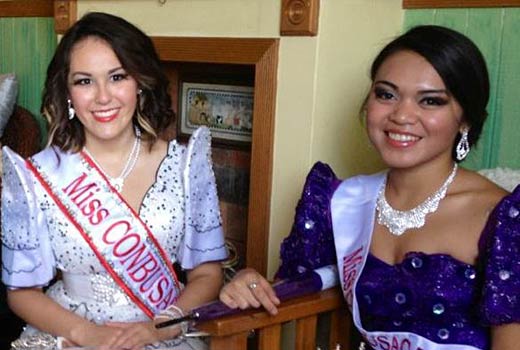 So what is sexy to Marlon and Marvin Penales Olano, the identical twin hunks from Los Angeles, California, who came here for the Tigum Bol-anon sa Tibuok Kalibutan (TBTK) who are making women -- and other creatures besides -- swoon?

"I go to the gym and plays ball and physically fit," says Marvin. "I feel sexy when I go to bed naked or only in my boxers."

"To me," says Marlon, "I feel sexy when coming out from the shower then I shave my beard wearing only a white towel."

"They got that baby face, charming sex appeal and sizzling body that women have been dreaming about," says a fan of the twin hunks during the pageant night.

"I met the twin hunks in some gatherings of Boholanos in LA," says the US-based Boholano socialite Mikey Gatal (who owns the Mikeygatal.com). The hunks accompanied Mikey last week in Ilijan, Ubay for Mikey's charity event.

Adds Mikey: "They are athletic, nature lovers and romantic. Everything about them is impressive, logical and orderly." Because everything Marvin does, Marlon does just as well. And vice versa - although they insist there's no rivalry.

And, er, who's luckier with the ladies? Their parents are worried right now because they found love here. Marlon is leaving early for Manila to meet his dream girl and Marvin is staying in Cebu for five days to meet his girl.

For the record, they're both currently single. And although they enjoy bickering about who looks more like singer-writer Bruno Mars, they never argue. 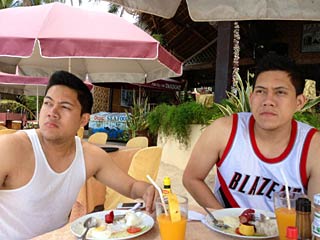 Sexiest book
Marlon: Culinary books because I like to cook.
Marvin: Any book.

Sexiest food
Marlon: I am vegetarian and I like more fruits.
Marvin: Anything with meat.

Sexiest time of day
Marlon: When I wake up in the morning I feel sexy.
Marvin: Night time is sexy for me.

Sexiest scene he has seen in a movie
Marlon: Mission Impossible Tom Cruise crawling on the wall, I feel like I can do that too.
Marvin: My Neighbor's Wife, the kitchen scene. 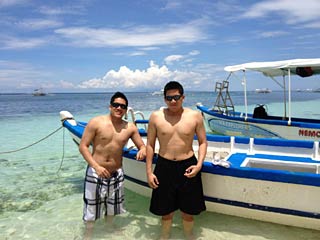 Sexiest fantasy
Marlon: A shirtless master chef with sexy assistants.
Marvin: When I wake up in an island and served by all beautiful women.

Sexiest thing he has done for a girl
Marlon: I surprised a girl to have a dinner date in an expensive restaurant and sent her flowers.
Marvin: We went outdoor bungee jumping together and she loves it.

This article has been viewed 159 times.