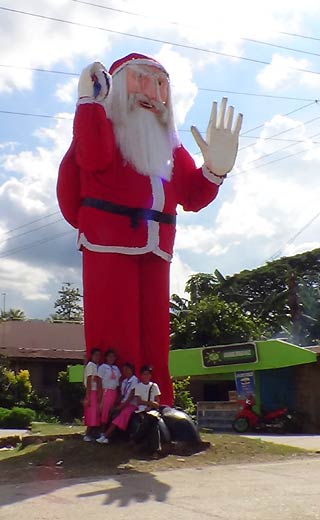 Seen: The giant Santa Claus, which measures 25 feet high, in Sierra-Bullones, Bohol colors the Yuletide Season! The biggest and tallest Santa Claus in Bohol and probably in the Philippines has been attracting visitors for years.

Scene: Supreme Court Associate Justice Roberto Abad will visit Bohol on Monday, Dec. 17 to give a lecture to judges, prosecutors, government and private lawyers and police investigators on the Judicial Affidavit Rule (A.M. No. 12-8-8-SC). 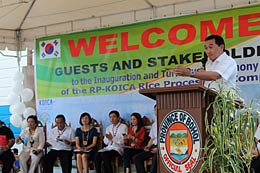 Rep. Arthur Yap, the only Boholano solon who
showed up and voted against the RH Bill in Congress,
delivers his message during the inauguration and
turn-over ceremony of the modern Bohol Rice
Processing Complex in Pilar town.
Courtesy: Ric Obedencio

Seen: Paul Emerson Salinas Almontero was recently adjudged as one of the Ten Outstanding Expat Pinoy (Overseas Filipino Worker) Children -- Ibang Klaseng Talino Category -- 2012. He is the first Boholano to receive such prestigious award from the Bank of Philippine Islands search for outstanding expat children that made its final judging from among 86 national finalists nationwide.

What a busy, busy schedule I had last week! After watching Pacman-Marquez IV, I hurriedly went to JJ's Seafoods for the preliminary interview of the Mr and Ms Teen Bohol 2012 organized by Sangguniang Kabataan (SK) Provincial Federation headed by Jethro Nathaniel Imboy.

The 28 contestants sat down for a conversation with Jeycelle Espejo and yours truly. I could say, this year's contestants are "one of the best batches" of Mr and Miss Teen Bohol. Many of the contestants were recruited from the modeling field so we're seeing familiar faces. There were also neophytes and veterans.

As we were about to end our interview, I saw Alvin Acuzar and Myttee Palo who were busy preparing the function room for senatorial aspirant Aurora Rep. Edgardo "Sonny" Angara. Rep Angara was the guest of honor during the State Colleges and Universities Athletic Association (SCUAA)- Regional Meet.

Rep. Angara, who was named one of the country's Ten Outstanding Young Men (TOYM) in 2010, is the author of the measure seeking to create a Philippine High School for Sports (HB No. 3825). This will answer the clamor for a stronger national grassroots sports program that will help young Filipino athletes become more competitive in the global arena. 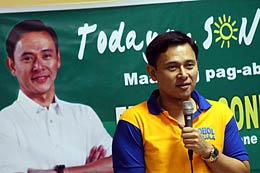 Aurora Rep. Edgardo "Sonny" Angara is out to
prove everyone he can also rise above his father's
shadow. Courtesy: Ric Obedencio

We ended the night saying, "What a Sonny Day!

The next morning, Edward Guyano, Janet Villarojo and other media friends went to Pilar to cover the inauguration and turn-over ceremony of the modern Bohol Rice Processing Complex (BRPC) funded by the Korean International Cooperation Agency (Koica).

The BRPC intends to improve efficiency in the rice postproduction system through the reduction of postharvest losses, enhancement in the quality of milled rice, improvement of the distribution system and maximization of rice by-products.

It is very modern that Edward and I witnessed how brown, red, pink and white rice separate from each other. The rice processing complex has post-harvest facilities like modern rice mills, mechanical dyers and warehouses.

Rep. Sonny Angara with the people's organizations and the media. Courtesy: Ric Obedencio

According to Gov. Edgar Chatto, Bohol is considered as the rice granary of the Central Visayas and farmers from the 18 towns of Bohol will be benefited from the modern rice complex.

Hon. Lee Hyuk, Ambassador Extraordinary and Plenipotentiary of the Republic of Korea to the Philippines, stressed the importance of Korea-Philippine relationship. He said that BPRC is a testament to the continuing and deepening commitment of the governments of the Philippines and Korea to develop the agricultural sector of the Philippines.

"I hope that this PRC project will set a milestone, a starting point for the national growth of the Philippines as well as the helping and empowering of the Filipino farmers."

Rep. Arthur Yap recalled that the project was proposed in 2009 during the administration of then Bohol Governor now second district Rep. Erico Aumentado. Yap said, "As our population is increasing, we have also to increase the use of our land and we have to increase rice production. Koreans and Filipinos stand side by side together in this battle against poverty, in this battle for self sufficiency in food."

The event was also an opportunity to see ABS-CBN Star in A Million 2005 grand champion Jerome Sala who sang the Philippine Anthem after years of inactivity.

The Catholic Church says that the nine-day dawn Masses are held at 4 a.m. to commemorate the actual birth of Christ. The liturgy for nine consecutive days is in honor of the Blessed Virgin Mary.

The tradition dates back to 1587 in Mexico, when Fray Diego de Soria, prior of the convent of San Agustin Acolman, petitioned the Pope to hold Christmas Mass outdoors to accommodate the huge number of mass-goers.

However, the novena Mass has no longer been strictly held before dawn. The Catholic Church has adjusted to modern urban schedules.

In our times, the Misa de Gallo has also become an opportunity to keep in touch with relatives and friends. And, ehem, it is also the time for young boys to court girls and many lovers also tend to spend more time in the churchyard rather than inside.

Some people still challenge to complete all nine masses especially if they have special petitions this Christmas.  A friend told me that if someone can attend the nine masses, wishes will be granted.

During Misa de Gallo, our love affair with food is heightened. We don't have puto bumbong (sweet taro steamed in small bamboo tubes) here but we have native rice cakes such as bingka, suman and puto maya. To keep warm during the cold weather, there are salabat (ginger tea) and sekwati. 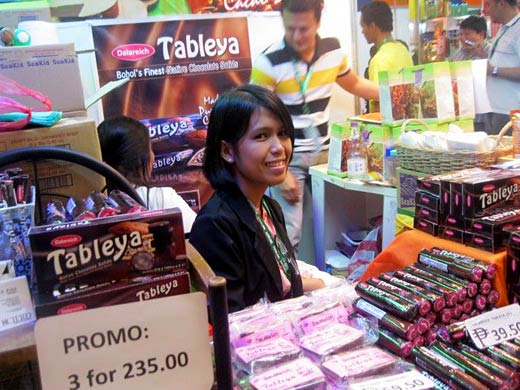 Make sure you have something in your stomach to have a memorable Misa de Gallo experience.

Meanwhile, join Bared for a look back at all the buzzed-about newsmakers who made the year--and decade--so unforgettable. Send your feedback to leoudtohan@yahoo.com or text +639212446791.