From Vanity Salinana's winning to the death of Rep. Erico Aumentado, 2012 was dominated by the many happenings of famous people in Bohol.

Some stories were happy ones; others, not so much. As we observed, 2012 was chock full of drama, major comebacks, career high notes, and some sad stuff too.

But no matter what went down over the last 12 months, we watched and followed our favorite people thru radio, newspapers and the social media as the good, the bad and the OMG took over the headlines.

What were the most memorable moments of 2012?

Bared has relived them all. 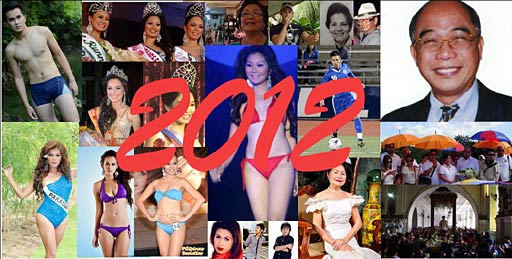 2012 saw the birth of beauty queens in the province.

Bohol's Queen of Tourism Rose Soy was the Queen of Santacruzan 2012, Candy Cumayas was the Reyna Elena 2012.

It was also a good year for Vanity Kintanar Salinana who won the Queen of Cebu Universe 2012, the pageant for Alternatives held on November 9. Before winning Queen of Cebu, Vanity won the Carnival Queen of Mandaue 2010 and Bb. Gay Pilipinas Region VII in 2011. She made history for Bohol after becoming the very first Boholana transgender to be crowned Queen of Cebu.

Richard Gutierrez was spotted in Bohol on Valentine's Day. Richard was not dating someone but he was with the kids of Guiwanon Elementary School in Baclayon (hometown of actor Cesar Montano) who were the recipients of the Bikes for the World. Richard also visited Pamilacan Island. He also attended the Valentine programs of Laya Elementary School and Baclayon Central Elementary School.

The Queen of Talk Show Kris Aquino visited Bohol for the second time to shoot an episode for Kris TV show on ABS-CBN.

Filipino YouTube sensation Mikey Bustos, the comedic talent behind a series of wacky Filipino "language tutorials" that have gone viral online attracting millions - and counting, was spotted in Bohol to make his funny video of "Bohol and the All-knowing Tarsiers."

Actor Aga Muhlach was in Bohol to shoot an episode about Bohol for his travel-adventure show Pinoy Explorer on TV5. Days after, matinee idol/TV host Drew Arellano was spotted in Bohol for his weekend adventure on GMANewsTV's Weekend Getaway. The Bohol visit was the nth time for Drew.

Vice Ganda tickled our funny bones in a Valentine concert on Feb. 11. A Night with Christian Bautista on April 28 also amazed the crowd.

The unique concert event of celebrated folk-rock artist Joey Ayala (with his band Ang Bagong Lumad) and Pinoy pop icon Lolita Carbon of the band ASIN was held in Danao EcoPark on July 8.

Music-lovers also watched balladeer Basil Valdez who sang those oldies but goodies from the 60s and 70s that we loved so much... beautiful memories are made of them.

Gospel singer Don Moen also brought the kingdom of God to Bohol with songs of praise and worship on Nov. 10. The concert was part of his three-day tour "God Will Make A Way! Philippine Tour 2012." Don Moen interpreted closely the words of the Bible in God Will Make A Way, Thank You, Lord, God Is Good All The Time and Give Thanks.

Tensions between Panglao Vice Mayor Evangeline Lazaro and Panglao Mayor Dodong Alcala exploded in the last quarter of the year.

The network war, in case you haven't noticed, was getting uglier and uglier, too.

The cattiest of fights to the lowest of blows of these scrappy famous would continue this election time.

Clement Paulinel Lofranco Ingking had a lot to thank God for in 2012. Even though he lost out to Marc as Mr Olive and Mr Teen and Mr. BISU2012, we still think Clement had a super-sexy year.

Mitch Capili (Michelle Angelu Kapirig in real life) was among the Top 20 in GMA-7's Protégé: The Battle For the Big Artista Break. She didn't continue her journey for the big artista break as she was eliminated in Protégé First Elimination Night.

Lukas Enrique Magallano, the son of Luther Magallano of Cortes and nephew of Dr. Luisito Magallano, was hailed as the winner of the Promil Pre-School I-Shine Talent Camp in the finals on July 28 on ABS-CBN. Lukas bested 11 other talented kids for the title of first "Grand I-Shiner." Aside from scoring a contract with ABS-CBN's talent management firm Star Magic, Magallano also won P500,000, and a one-year supply of Promil Pre-School.

STORIES THAT TOUCHED US IN 2012

We were touched of the baby girl thought to be just a few hours old when she was found early morning in Albur town abandoned in a bag.

And so, after all the twists and turns, the action, drama, romance, suspense, etc, Prony, the longest and biggest python in captivity, found a new home in Barangay Laya, Baclayon last March 7. Her "twin" sister, Paloma, is still performing her deadly acrobatic moves and kagwang style.

Thirty-five elementary students of Totolan Elem. School in Dauis were hospitalized for food poisoning after eating the fruit of 'tuba-tuba' on June 8. Also, two died and one hospitalized for eating popper fish or butete in Mabini.

When nature strikes... Typhoon Gener claimed the lives of couple Jury and Mylene Betaganzo of Buenavista on August 1. The couple were on board passenger motorcycle somewhere in Getafe when hit by the falling coconut tree which also hurt its driver and the couple's two-year-old son. They died on the spot.

Several rice fields had dried up after months of no rain in Bohol, considered the food basket of Central Visayas. Water level in a major dam in Pilar town had reached critically low levels. Cloud seeding operations were done to save the farms.

At least 85 houses and 13 motorized outrigger boats called pumpboats were damaged when a tornado struck four coastal villages in the Jagna.

2012 was Bohol's gas price problem. It was reported that there was a significant discrepancy in oil prices in the province when compared with those of neighboring regions and other areas in Central Visayas. Governor Edgar Chatto appealed for conscience and corporate social responsibility from the three major fuel companies, after a heated forum failed to settle the needed cheaper fuel prices in Bohol.

Panglao was shattered with a gruesome incident involving the rape-slay of a resort cashier on Jan. 10. Tagged as suspect in the grim rape-slay was Erwin Escomo. He confessed he was "out of his mind" when he raped and then killed Josephine Micla. Panglao Mayor Benedicto Alcala reacted furiously as he ordered Panglao policemen to take the island's drug problem seriously.

Armed with guns, inmates Exequiel Aniscal, Brian Ceniza and Mario Llaya escaped from Bohol District Jail on May 17. Five days after the manhunt operation, Ceniza and LLaya were in an alleged encounter with police authorities in Ubay town.

Actor and businessman Mandy Ochoa lost his wallet and cellular phone while going through the Tagbilaran Airport's X-ray machine. The airport terminal building had no CCTV cameras.

Two Boholanos who wanted to increase the size of their booties made it on TV when their buttocks got infected following injections of collagen. They sought the help of the Criminal Investigation and Detection Group in Central Visayas (CIDG-7) to trap the fake doctor. After that incident, health authorities had issued a warning against using the services of unlicensed cosmetic surgeons or practitioners, saying consequences could be fatal.

Louie Digal vs. Facebook Trolls. Loboc Vice Mayor Louie Digal fell victim to internet pranksters on Wednesday, Nov. 21, when his Facebook account was hacked. A message promoting "political and venomous announcements" popped up on the mayoralty candidate's page, and Digal was unimpressed that his account had been illegally accessed.

The Ombudsman suspended Cortes Mayor Apolinaria "Jasmine" Balistoy for six months without pay as a result of an anti-graft case that reached all the way to the Sandiganbayan filed by Vice-Mayor Danilo Montero.

Juana Change and other two speakers with Bamboo as the event entertainer for SK Convention on Sept. 15-16. Juana Change, who is known for her anti-epal campaign, ordered the organizers to remove the "epal" tarps. The organizers replaced the tarps and removed Juana Change as one of the speakers. The incensed Juana Change mentioned the incident on Morning at ANC and reported on GMA News.

Panglao Island has been named as one of the Best Secret Beaches on Earth by Travel+Leisure Magazine in its March 2012 issue. It also named Ananyana Beach Resort and Spa as one of the Best Affordable Beach Resorts occupying a prime spot on the beachfront serving Filipino-Mediterranean dishes like the penne with pork adobo.

Thousands of devotees converged to pay homage to the sacred image of St. Pedro Calungsod, the second Filipino saint in Bohol on November 25, as part of the "Duaw Nasud" for Visayas and Mindanao.

Some of our (favorite) Boholanos passed away in 2012-but left their mark on the world. They are gone but not forgotten.

In 2012, the province lost an incredible beauty queen and leader. Miss Bohol Sandugo 1955 and former Mayor of Maribojoc Paula Raagas -Valles passed away on July 8, 2012, aged 90.

The sudden death of eventologist and Alona's darling Uly Dolojol on Sept. 23, shocked friends all over Bohol. The outpouring of grief was immediate, with one common refrain: Alona Beach had lost one of its greatest persons.

Mrs. Asuncion Mira, trustee and treasurer of the University of Bohol (UB) passed away on Feb. 9.

Former city mayor of Tagbilaran Jose Maria Rocha passed away on July 4. He was 91. Rocha served as city mayor twice, first in 1980 to 1986 then in 1992 to 1995. He was also a city councilor and likewise served as executive secretary to then President Carlos P. Garcia.

The province was taken aback when news of Boholano great leader Erico Aumentado's death surfaced at just 72. According to Boy Pernia, the family's spokesperson, Aumentado died on Dec. 25. He was surrounded by family when he passed away in Makati. Boholanos worldwide were united in mourning after the passing of Aumentado. In a statement, House Speaker Feliciano Belmonte Jr. called Aumentado an "exemplary public servant." "He [Aumentado] deserves full credit for transforming Bohol into one of the most progressive, peaceful and richest provinces today. He was truly an outstanding solon - learned, dedicated, and principled," Belmonte said. Also, "Erico Aumentado" was trending on Yahoo Philippines.

This article has been viewed 120 times.